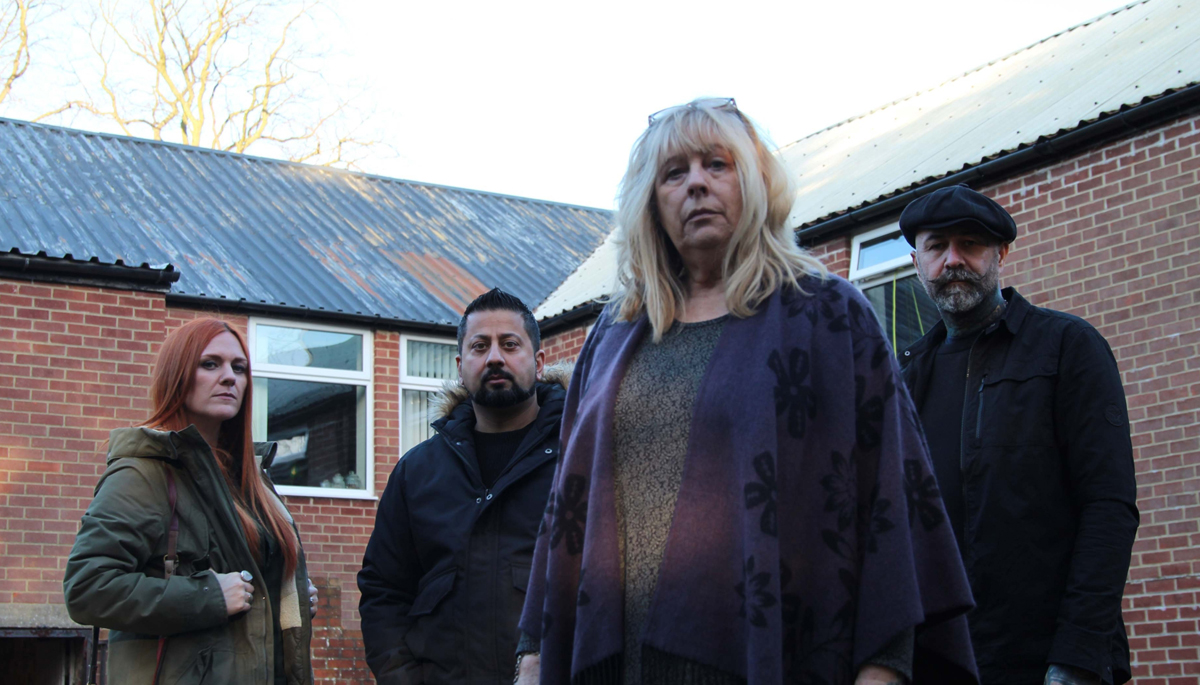 The 'Help! My House Is Haunted' Team Investigate A Village Hall In North Yorkshire

The 'Help! My House Is Haunted' team are called to the Yorkshire village of Charltons to investigate a village hall that is said to be hiding a dark past in the fourth-series episode entitled 'Village Hall Secrets', which dropped on Discovery+ this week.
While Ian Lawman, Jayne Harris and Barri Ghai were en route to the village, which lies to the east of the market town of Guisborough, they discuss the town's mining history. The team are in town to help the volunteers at the village hall, which is now known as the Charltons Community Centre. Committee member Jilly says, "the entire village hall is haunted." She added, "there are so many different spirits in the hall. They each have their own, shall we say, personalities."
While some of the spirits are friendly, others are quite terrifying. Jilly reports feeling as if she was pushed on one occasion. She says that the cellar is particularly negative and potentially home to a bad spirit. She added, "we do have a duty of care not to let people wander in there alone."
Of course, this isn't a home, it's a community building so things are a little different. But still, Jilly said, "what we would like the team to do is to, perhaps, define how many spirits we do have and also get rid of the bad spirit full stop." 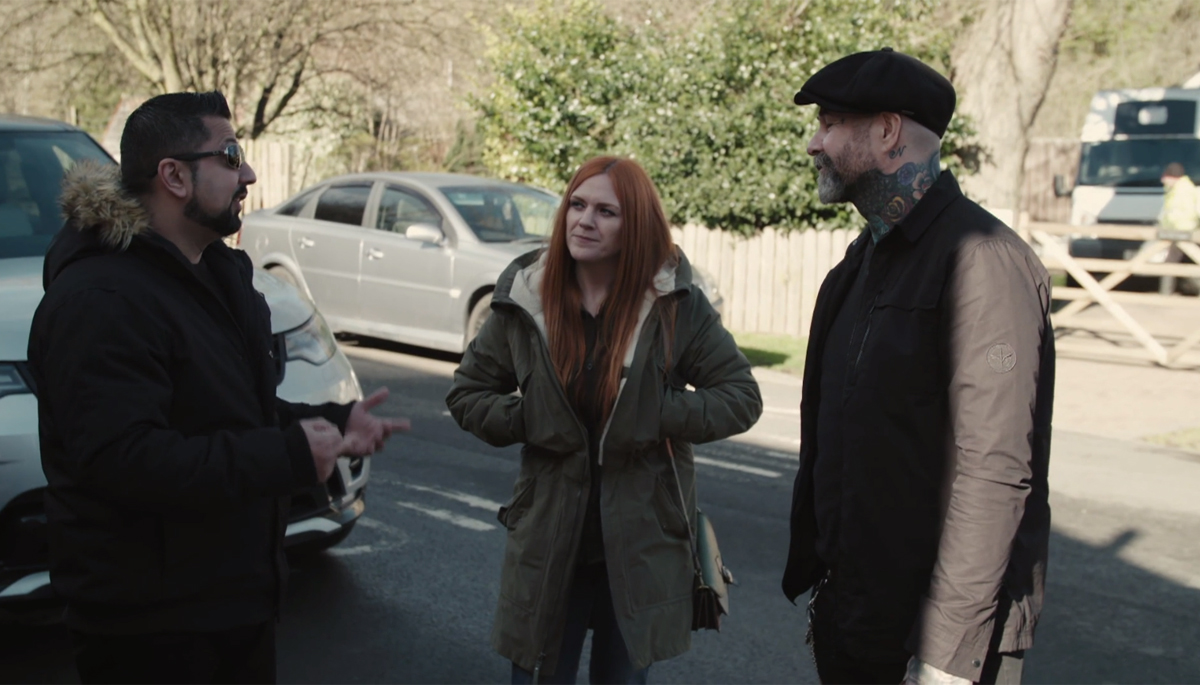 Photo: © Discovery+
As they approached the hall, Barri asked the show's resident medium, Ian, if he had any psychic insight into the haunting. Ian said, "I feel there's a water connection somewhere, I'm just feeling water." Ian described this as bizarre, perhaps because he'd realised he was inland and away from the ocean, although Ian is always kept in the dark about the case in advance.
Ian added, "I'm hearing a lot of loud noises. Music, for some reason. So whether the location we're going to plays music, or there's a connection with music." He also said, "I do feel there's going to be a female here, and there's going to be a significant death in this location."
The team split up after arriving and went to conduct their own research. Barri went to meet another committee member who's also experienced paranormal activity at the hall firsthand. Jayne went to meet Chris Twigg at the Cleveland Ironstone Mining Museum, where she found out about the local mine that opened in the 1870s. The community centre the team are investigating was created for the miners and the residents of the village that had popped up around the mine.
Jayne learns that the miners' bath house was situated underneath what is now part of the hall, could this be the water connection Ian picked up on? This seems to be the case. While Barri and Jayne are fact finding, Ian was conducting his initial walk around the location and was able to obtain lots of very fitting information about the existence of the former bath house and even its occasional use as a temporary mortuary. 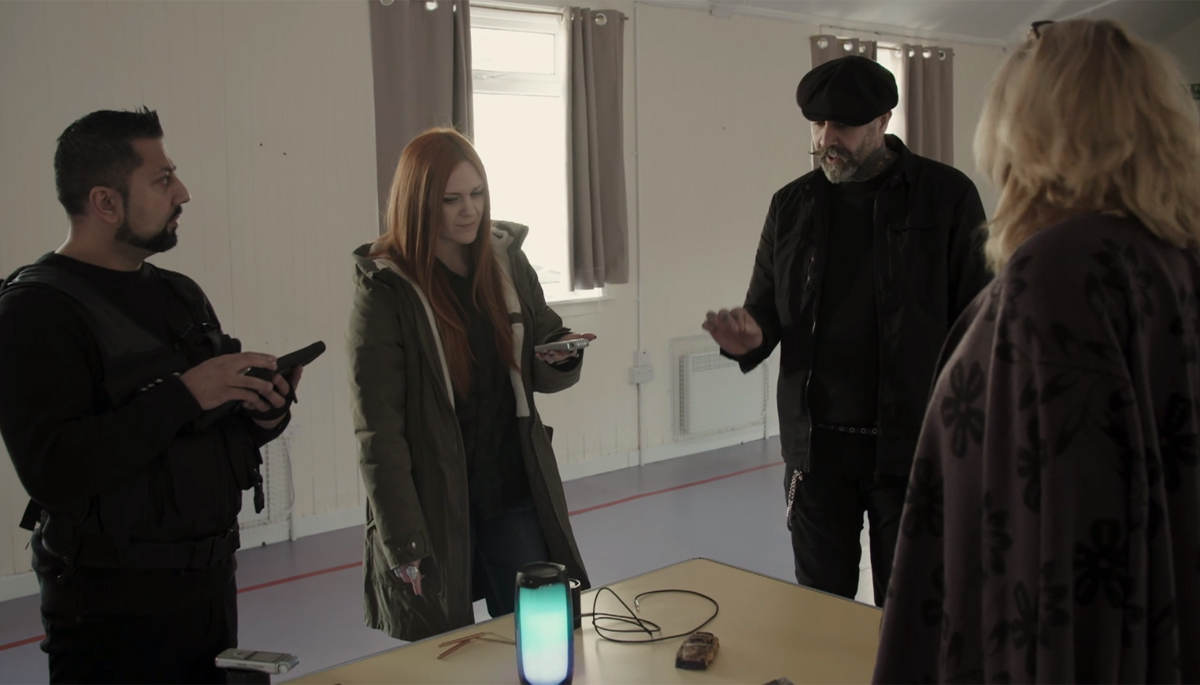 Photo: © Discovery+
The team came together to share the findings from their initial research and invite Jilly to join them for the first part of their investigation. Jayne starts off using a digital audio recorder in an attempt to capture evidence of spirit voices in the form of recordings known as EVP, or Electronic Voice Phenomena.
They were also using an app called Necrophonic, which is pre-loaded with partial words, reverse audio, and the phonetic sounds that make up words. As Jilly called out for two of the spirits of the hall, Polly and her friend Bert, the app seemed to respond first in a male voice and then the voice of a child.
Their EVP session ends suddenly when a proximity sensor in another room triggers, alerting them to a possible presence. They investigate, only to find the room completely empty. 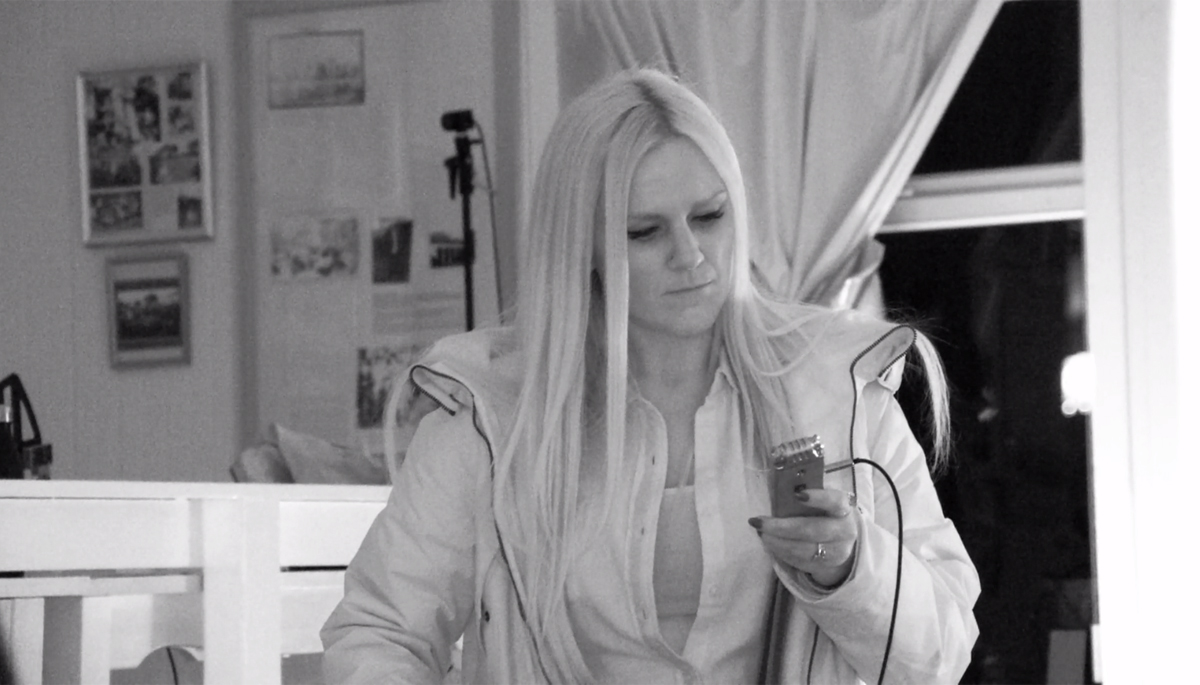 Photo: © Discovery+
After the spirit triggers session, the team were left alone and locked down inside the hall for their night-long investigation. They were using a gesture-controlled toy robot, which should only respond to human movements, but straight away it seemed to develop a life of its own and rolled across the floor as if being beckoned by an unseen person. The team reported seeing a shadow around the toy, but sadly it wasn't picked up on camera.
Moments later the proximity detector triggered again. Barri went to investigate and was able to obtain what seemed to be some very meaningful responses, with the the gadget beeping to indicate answers. Barri deduced that he was talking to a spirit called William. He said, "we are getting intelligent responses and this is direct communication method."
To back up this contact, Barri called in the rest of the team and they used the EchoVox app, which is pre-loaded with the phonetic sounds that make up every English word. The app randomly spews out these sounds and it's believed that spirits can affect the random nature of this app in order to form the words they are trying to communicate. They got some more seemingly meaningful responses from William through this app.
Later the team went down to the former bath house in the cellar, and soon it seemed that Barri was pushed by an unseen force.
The investigation ended with Ian using an exorcism prayer to help move the negative spirit on. Meanwhile, Jayne used a custom-made smudging stick. Smudging usually involves burning dried sage, although Jayne is using palo santo wood, the method is the same and it is believed that the smoke can purify a space and drive away negative energy.

What a great investigation the village hall turned out to be. Anyone skeptical of ghost hunting gadgets and apps can't deny the poignance of some of the responses the team heard. Including a moment when a gadget seemed to offer the word "push" to confirm Barri was pushed in the cellar. The team also caught a very strange scream, which sounded very much child like.
As for the revelation that the spirit they were calling William was actually called John but changed his identity. This doesn't seem as convincing and felt like a bit of a cop out in order to crowbar some resolution into the narrative of the episode.
You can watch the full fourth season of 'Help! My House Is Haunted' so far right now on Discovery+, with a new episode dropping next Friday.