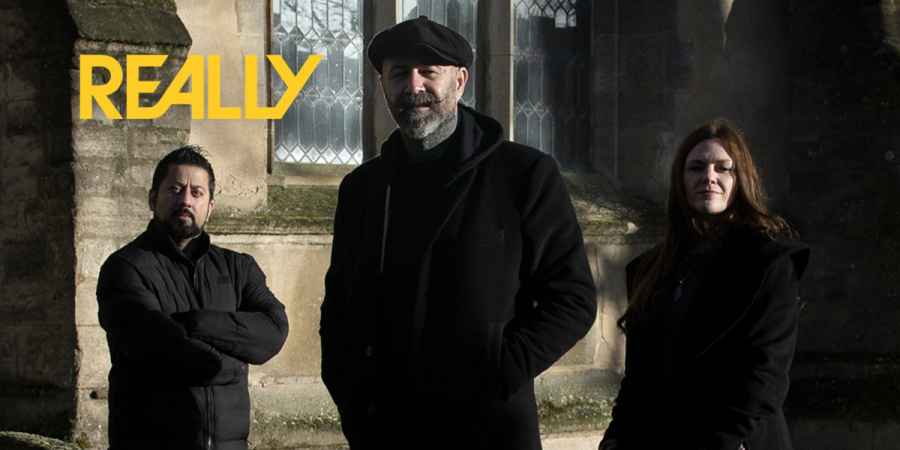 If you need help with your house being haunted, who are you going to call? Well, that's the big question that just got answered.
The Really channel have teased the return of the popular British ghost hunting show, 'Help! My House Is Haunted', but also announced a change to the shows lineup of investigators.
For series three, which is in production at the moment, existing paranormal investigators Barri Ghai and Jayne Harris will be joined by a new team member, psychic medium Ian Lawman. The team have so far shot eight of the 12 episodes that will make up the third series.
The team of three paranormal experts will once again travel the UK visiting houses and families troubled by hauntings, using the latest technology to try to capture never before seen proof of the paranormal, this time joined by Scunthorpe-born Ian.
The psychic investigator last appeared in the 5STAR series, 'Celebrity Ghost Hunt' in 2018, but Ian, who says he's been hearing voices that no one else could from a very young age, is no stranger to the world of paranormal reality shows.
In 2004, Ian appeared in 'I'm Famous and Frightened', in which he's credited as holding the worlds first ever live séance. He later went on to appear alongside Yvette Fielding in ten episodes of 'Most Haunted' as a guest psychic, but more recently Ian was a lead investigator in Really's original series 'Ghost Chasers' alongside Kay Nambiar.
The channel initially teased Ian's involvement in the show on Facebook, writing "Help! My House Is Haunted is returning with a new series...and a new team member! Can you guess who it is? Post your guesses below and stay tuned for the reveal later this morning!" The post included a photo of a mysterious silhouetted figure stood between Barri and Jayne, but fans of the show were quick to recognise the outline as Ian's based on his distinctive look that usually includes a hat.
Ian replaces the US psychic medium, Chris Fleming, who has been a regular on the show since its first series, but due to travel restrictions in place due to the ongoing COVID-19 outbreak, Chris wasn't able to take part in this series. Really wrote on Facebook, "unfortunately with the current pandemic, Chris was unable to film a new series in the UK."
Shortly after the announcement, Ian tweeted "a massive thank you to all the team from #HMHIH for making me feel welcome, Chris Fleming and I have spoken about the show and due to COVID couldn't return, I hope fans will make me feel welcome also 🙏"
His co-star Jayne tweeted, "the fabulous Ian Lawman has joined Barri Ghai and I for what is promising to be one hell of a series of #HMHIH!"
A date for the new series has not yet been announced, but keep an eye on social media as Really have said "we'll let you know as soon as we have confirmed dates." However the team have been busy filming over the last few weeks.
The show which was devised by Zak Bagans, star of the popular US paranormal show, 'Ghost Adventures' is produced by Back2back Productions and first aired in the UK back in 2018.
We're sure Ian will be a popular new addition to the show, as he joins familiar faces Barri - the founder of The Ghostfinder Paranormal Society and the show's investigator and paranormal tech expert, and Jayne - a self-styled "ghostorian" and founder of HD Paranormal Events, a public paranormal events company.
The team of three paranormal experts will once again travel the UK visiting houses and families troubled by hauntings, using the latest technology to try to capture never before seen proof of the paranormal.
If you can't wait to find out more about the new series, the be sure to join Barri, Jayne and Ian as they chat about their experiences and explain why this series will be very different in a live Facebook Q&A next week.
The three investigators will be answering fans questions from 7:30pm on Monday, March 8.

Tags:
help my house is hauntedparanormaltelevisiontopical