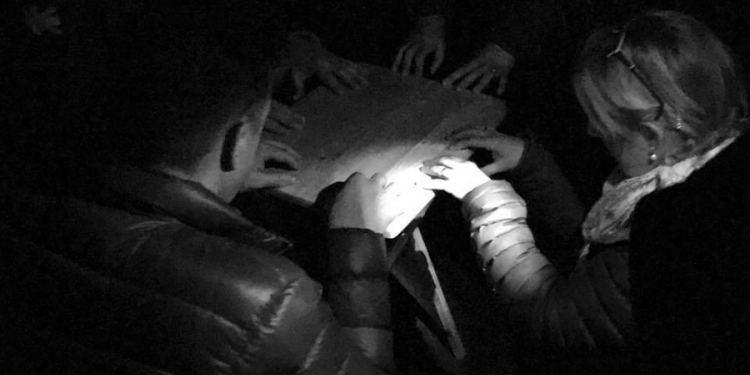 🖤
On Friday night at 10pm, you could take part in a first-of-its-kind paranormal experiment that dates back to Victorian times from the safety of your own home.
As the global lockdown due to COVID-19 continues, the paranormal events company Most Haunted Experience, is looking for ways to keep their customers entertained while they isolate at home.
The events company, an offshoot of the long-running paranormal television show fronted by Yvette Fielding, normally  welcomes on average around 300 guests to their ghost hunting events across the country every weekend, giving fans the chance to hunt for ghosts with Yvette and other members of the 'Most Haunted' team.
Although the stars of the show won't be taking part in this online event themselves, the MHE team will be guiding up to 100 members of the public through the experiment via a group video chat hosted on the video conferencing platform, Zoom.
The co-ordinated paranormal event will take place at 10pm on Friday 10th April and will see MHE's team and members of the public try to recreate the art of table tipping from their respective homes. The idea of table tipping is similar to that of a Ouija board, it's supposedly a way to communicate with spirits, but rather than sliding a glass around a board the aim is to encourage the spirits to rock or move the table.
The event will last for around 30 minutes and those taking part in their own homes will be asked to sit around a table, either alone or in a group, with their fingers lightly resting on the table's surface. Participants will then be given the opportunity to call out in turns in a controlled environment asking for spirits to move the tables of those taking part in what will effectively be a huge mass séance.
A table tipping experiment or séance of this scale has never been tried before, so who knows what will happen. The only way to find out is to take part in the event on Friday... if you're brave enough. A limited number of participants will be allowed into the chat on a first come first served basis.
The event's organisers say that the experience will be better if you use a laptop or a PC with a camera rather than a mobile phone so that your hands are free. They also ask that anyone wishing to take part familiarises themselves with Zoom before the event on Friday.
More details about the online event can be found on the event's Facebook page.