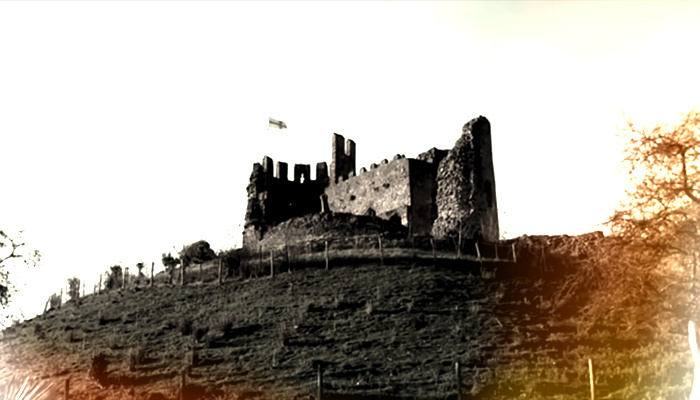 Having recently been named the most haunted castle in the UK, Yvette Fielding brought her team back to Dudley Castle to see if the claims were true. The show last visited the ruined castle, which stands overlooking the town of Dudley, for the first ever 'Most Haunted Live!' for Halloween in 2002.
Although there are some claims that some come of fortification stood on this site in the year 700, the castle dates back to 1071 following the Norman invasion in 1066. It played an important role in English history, so much so that it was visited by Queen Elizabeth I herself. In its history the castle has been destroyed, rebuilt, and passed through many hands. But the castle as we see it today is a result of its role as a Royalist stronghold. Much of the castle was destroyed by Parliamentarians in 1646. 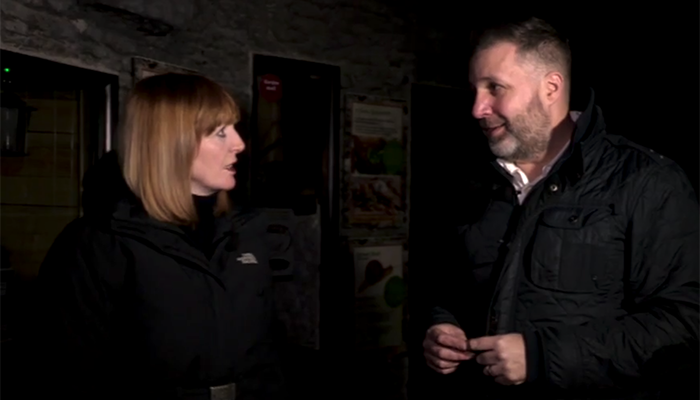 The castle is said to be home to many spirits including the Grey Lady who is believed to be the ghost of Dorothy Beaumont, who once lived in the castle and died here following complications after giving birth to her daughter. Her ghost is most often reported in the castle's keep in the form of unexplained sounds and icy blasts of air, which are often accompanied by a strange blue mist.
However, the most haunted part of the castle is the chapel undercroft, where you'll find a stone coffin which is said to have once held the body of one of the castle's most infamous residents, John Somery. His ghost has been spotted as disembodied legs beside the coffin. Others have reported feeling him tug at their clothing as they walk through this part of the castle.
Dudley also has the ghost of a drummer boy who was said to have been killed by a stray bullet during the Civil War. He's mostly heard at night beating out drum rolls as if in battle. People have also reported seeing dark shadowy figures, and hearing strange sounds throughout the castle.
Yvette is very excited, due to the castle's history of so many reported hauntings, witchcraft and death. She excitedly tells the show's resident skeptic, Glen Hunt, that Dudley Castle, "it's got everything." Glen agrees, but thinks that this could be influencing them, "stereotypically it's a castle in ruins with a chequered history, like every other castle up and down the land. Already, we're pre-programmed to expect that it's haunted." 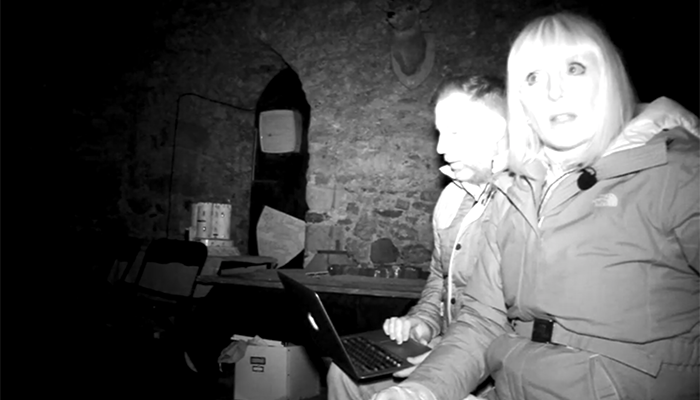 The team got stuck into their investigation, Yvette and Glen started out in the undercroft with Darren Hutchinson where straight away they heard a deep thud that they couldn't explain. This was followed by several taps and knocks, but then suddenly there was another loud bang that the team couldn't explain.
Glen then whipped out his laptop to try to record some EVPs, while the tapping sounds continued. Yvette described it as like something was scratching. Glen and Yvette also heard what sounded like clothes rustling behind Darren, which poor Darren wasn't very pleased about.
Yvette then asked the spirits to copy her before knocking on the wooden bench three times, they heard deep thuds coming from the walls which seemed to be in response. Still sat down, Yvette and Glen then reported feeling the bench move. 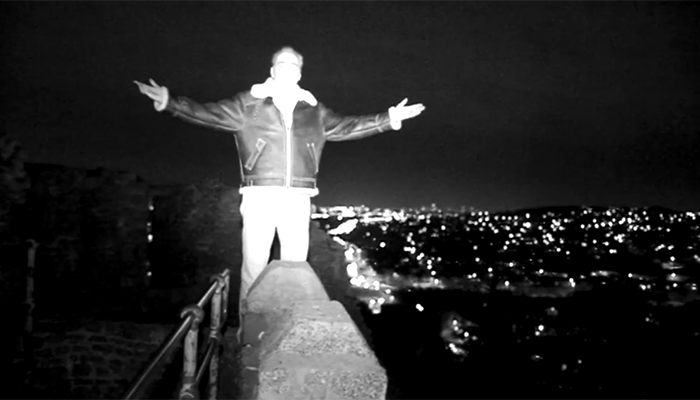 Meanwhile Karl Beattie was at the keep with demonologist Fred Batt and an elusive Stuart Torevell. Exposed to the elements they called out to the spirits as they stood with an uninterrupted view of the town below. It made a change to see them outdoors, there are plenty of stories of ghost roaming the grounds of stately homes and castles, but ghost hunts are rarely outdoors.
Fred was trying to tap into the history of witchcraft at the castle, he called "come forward, you witches that used to be here many years ago. Including the one that died a terrible death here."
They then heard an owl-like sound coming from further along the battlements, but there was nothing to be seen. They heard another sound coming from the bottom of a spiral staircase, running with the camera Stuart said "come on, if there's someone down there, we'll get them."
The boys then heard a sound coming from the top of the stairs they've just come down and ran back up. Stuart described it as sounding like heavy shoes. Karl says this is excellent proof of the paranormal, as they'd heard footsteps coming upstairs, they'd followed them and found themselves in a dead end. Fred adds, "no one can get in here, no one can get out up here, so the thing has just disappeared."
Karl, getting brave stood on the battlements and asked the spirits to prove they were there by pushing him, "come on if you're here, do something to me. Knock me off." Speaking to Stuart he says, "I've got certain death on one side," before realising that his co-host and wife Yvette is going to be the death of him when she sees this footage. 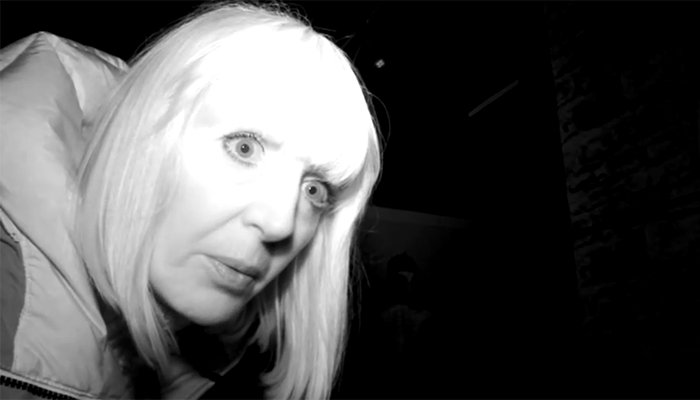 The team swapped locations, unusually Glen went off on his own, other than his laptop. He had it placed in a window on the spiral staircase leading to the battlements. He did point out there was a lot of traffic noise in the distance as the location was exposed, but he hoped to capture some spirit voices in the form of EVPs none the less. While wandering around on his own, he heard a few sounds, but his time alone was relatively uneventful and he gave up once he realised he'd been left out in the cold while everyone else was inside in the warm.
Meanwhile, Yvette went with Fred and Darren to an area of the castle which is now used as a museum. Yvette started calling out, "I'm talking to any spirits that may hear us or see us, who lived or died here in this castle. Can you hear my voice?"
Yvette was interrupted by two loud knocks, Fred took over and called out to the spirit of John Somery, "are you still with us John?"
They heard a series of bangs, they thought it might be because Darren apparently looks like the late Earl of Dudley. On hearing this Darren looked into the camera and slyly said "the Earl of Dudley is a lucky man." Fred tried to get a reaction from the spirits by asking them to push or touch Darren. If Darren had been on his own with Fred he would have lost it like last week, but luckily he had Yvette with him to protect him.
The team started to feel very uneasy, reporting a sensation like someone or something was following them, as they continued to hear bangs from all around them.
At one point Yvette called out, "do something, do something to Karl and Stuart." And it seems the spirits obliged.

Back In The Undercroft 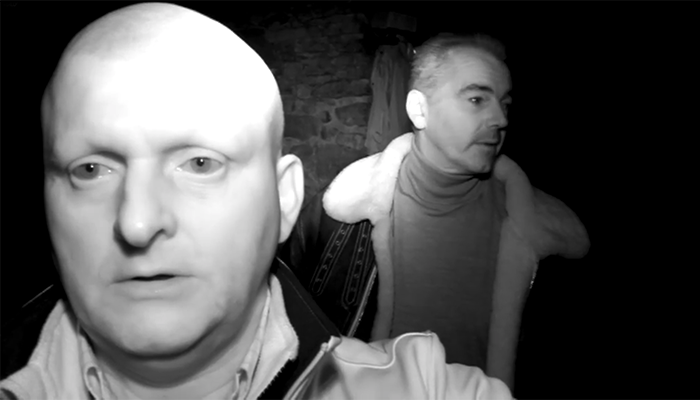 Karl and Stuart were in the undercroft when the spirits acted upon Yvette's request for them to do something. Before this they'd already heard a knock on the door, Karl ran outside to find there was no one there. Then moments later in response to Yvette's plea, there was an almighty crash like something being thrown.
Karl and Stuart investigated the room but couldn't find the source of the sound. When it happened a second time they found it was the result of a copper pot which had been thrown on the hard floor of the undercroft. Stuart managed to catch the aftermath on camera, we got to see the pot rocking on the floor. Karl did find that the base of the pot was bent, perhaps it fell from the table it was on?
This was followed by clinking and rattling sounds like a chain moving. There was a big heavy chain on the table which neither of them were near, that could have been the source of the sound.
The episode ended with Karl calling out to the spirits. After he'd said "if you're here, make another sound and I'll leave," there were three strikes of a bell. Stumbling around in the dark they managed to find the bell at the other side of the room, but how it rang remains a mystery.
As the credits roll, the names of three loyal Most Haunted fans appear as production assistants, Laura Gamble, Ben Thompson and Chloe Weaver - it's quite an honour for any "hauntie" to be recognised in this way and I can't imagine it happening in the credits of any other television show.
The new series of Most Haunted continues on Really. Watch on Freeview (17), Sky (155) and Virgin Media (129), or watch previous episodes of Most Haunted on demand on the UKTV Player.
For reviews of all of the new episodes, plus highlights and evidence from the shows, and to find out when Most Haunted is on next, visit the Most Haunted episode guide.