10 Most Haunted Places In Lancashire

Lancashire, along with Yorkshire, Greater London, is one of three areas of the UK where residents make the most reports of paranormal activity. Plus police in the area recently revealed that they've been regularly dealing with reports of not only UFO sightings but also claims of alien abductions in the county and a craft landing in Marsden Park, Nelson.
The county in the north west of England also has several very famous haunted location and a dark a sinister history, including the site of the Pendel witch trials in East Lancashire.
There are so many haunted locations in the area that Yvette Fielding and the 'Most Haunted Live!' team once broadcast live from various locations across Lancashire for eight consecutive nights.
Below are the ten haunted locations and their paranormal history which are best known throughout the county. 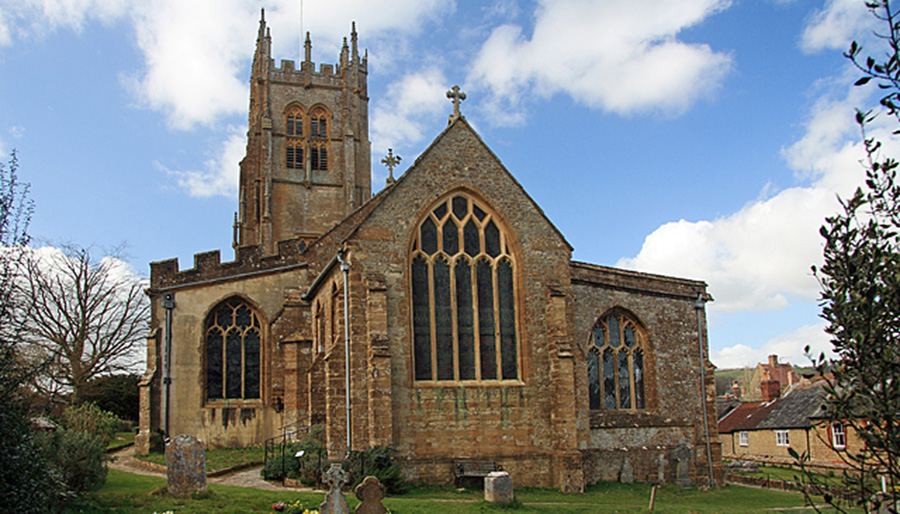 Photo: © Mike Searle
This Grade I listed place of worship is said to be haunted by the spirit of a local boy named John Daniel, who's seen sitting at a desk in the church dressed in a school uniform and hat. He's said to have died in suspicious circumstances in 1728.

Another regularly sighted ghost is that of a woman seen wearing a dark gown and straw hat with a flowered handkerchief around her neck, she's been spotted standing in the church doorway. Some think she may be John's mother, Hannah Daniel, who is said to have died shortly after childbirth.

The haunting extends into a nearby field where a dairy farmer once saw two figures standing by one of his herd. One was a woman wearing a long white gown and the other was a boy wearing a dark outfit. They were seen to walk away in the direction of the graveyard, vanishing at the graves of the Daniel family. 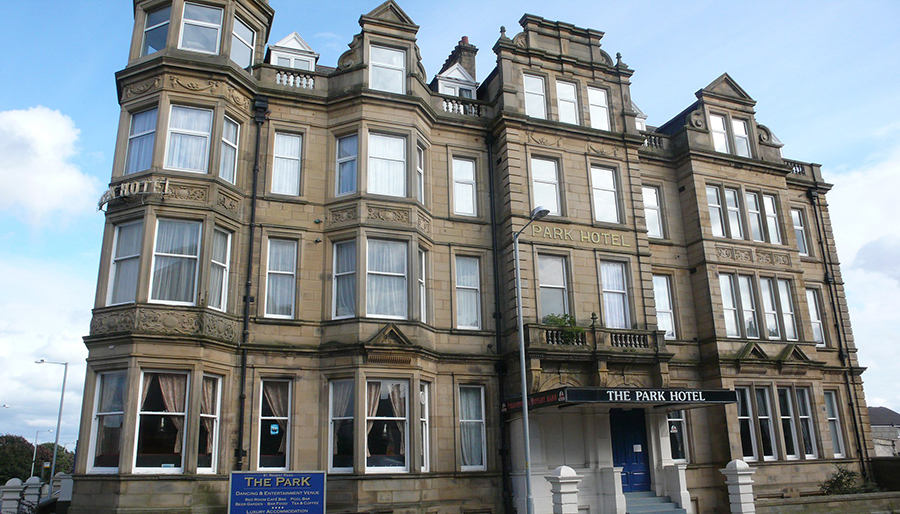 Photo: © flipflopnick
The grand hotel, which now stand abandoned on the seafront, was built in 1895 by Edmond Park, the luxury hotel attracted England's wealthiest and most influential, but it was rumoured that after hours Park held séances and strange occult rituals. He mysteriously disappeared in 1899, never to be seen again. Many think that he was murdered in the hotel, cursing the property and his spirit has never left. The story of the curse it well known throughout the town.

Locals say a young soldier drowned in the sea and was brought back to the hotel, where he was pronounced dead. They also tell the tale of a woman named Emma Manson, who was murdered by her husband on the second floor and his body was found hanging in the tower. Another man took his life on the tower too, hanging himself from the outside.

Staff and visitors in the hotel have heard disembodied screams, seen phantom apparitions in the hallways and witnessed a child spirit roaming the building. Lights are said to turn themselves on and off and the property's manager has even caught a demonic face on CCTV. 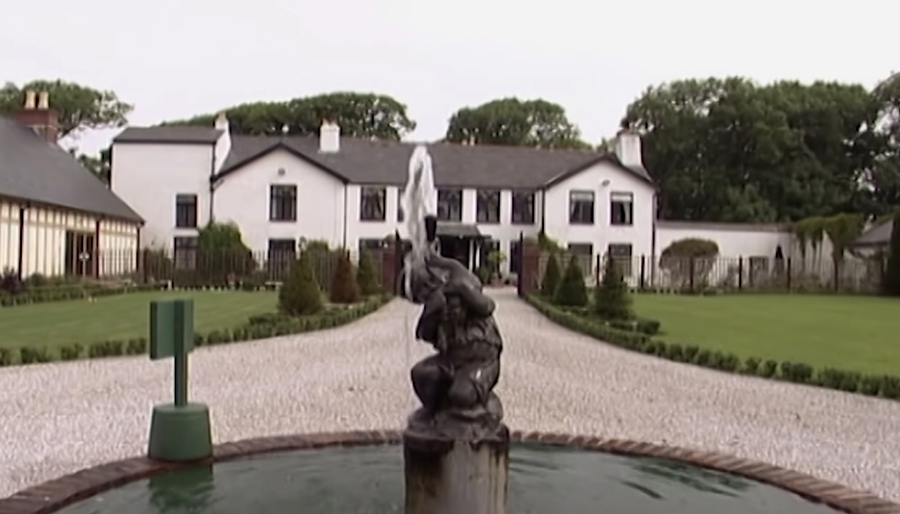 Mains Hall in Blackpool is home to many fantastic stories of paranormal activity. With an ancient burial ground to murdered monks and children playing in bedrooms. The house dates back to at least the 15th century and is possibly built on foundations dating back to the 12th century.

The master bedroom is said to be one of the most active rooms in the property. The ghost of a tall lady has been seen walking around the bed and the door's latch rattles as if someone is trying to get in. The ghost of a cavalier has been frequently spotted in watch was once a cocktail bar.

The ghosts of murdered monks are commonly sighted in the house and in its grounds, and the building is also said to be plagued by poltergeist activity, the disembodied sounded of voices are often heard when no one is around and doors slam on their own. 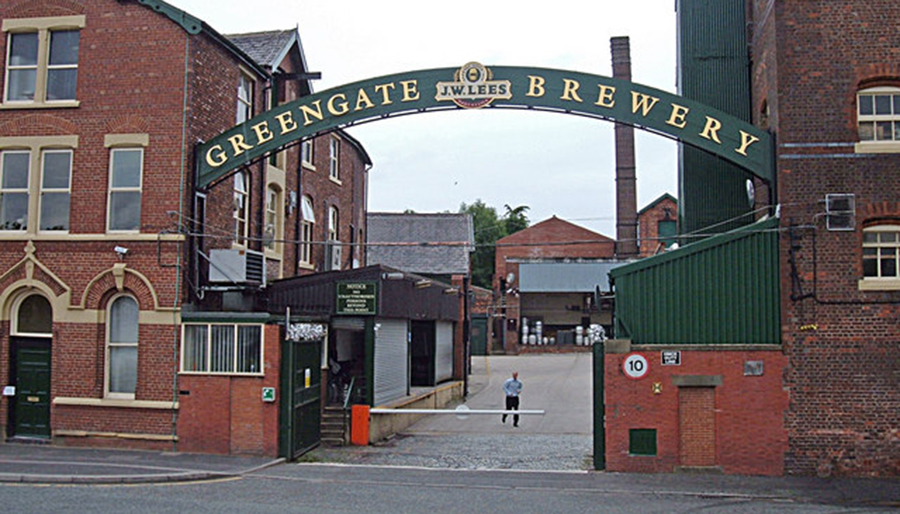 Photo: © Michael Ely
The Greengate Brewery is said to be troubled by ghostly goings-on including barrels moving around in the cellar, a dark figure appearing in the attic and a security guard getting his face slapped by an invisible presence. Inside it resembled an old factory, while the outside of the building looked like it belonged in the television show 'Coronation Street' with its cobbled lanes and red brick buildings.

In 1828, a successful cotton manufacturer by the name John Lees bought the Greengate house premises and set up a brewery. Although new to this line of work, John succeeded in creating a thriving family business. In 1876, ale product was so good, that a new brew house had to be built to cope with demand. Two years later, the founder's sole surviving grandson, John Willy Lees, took the helm and the brewery became J.W. Lees & Co. The brewery has managed to change with the time and remained a successful independent company.

The brewery has a high level of reported paranormal activity, such as poltergeist activity, phantoms and footsteps have all been witnessed here. 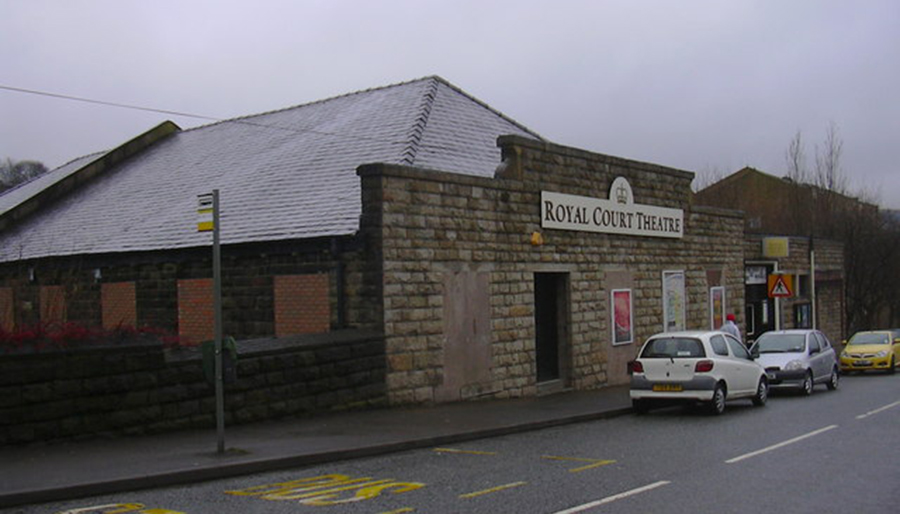 Photo: © Robert Wade
The Royal Court Theatre was once the site of the Henrietta Street Iron Foundry, until it was destroyed by fire in 1850. It was later rebuilt and opened its doors to the public in 1893.

Many staff, guests and performers have reported paranormal activity in the form of poltergeist activity, ringing bells, unexplained draughts, and even disembodied blue legs seen walking through the building.

One of the theatre's ghosts is that of Kitty, who is thought to be an usher who worked at the theatre at some point in the past.

Others have reported hearing shuffling feet, the sound of an audience taking their seat but on investigation have found the theatre to be empty.

Reports of ghostly goings on have been made as recently as 2008, when a spirit was captured in a photograph taken during a performance by the Second Rossendale Scout Band. Although the ghostly figure wasn't visible at the time, in the photo an old woman with grey hair was seen wearing a black dress with a white collar. 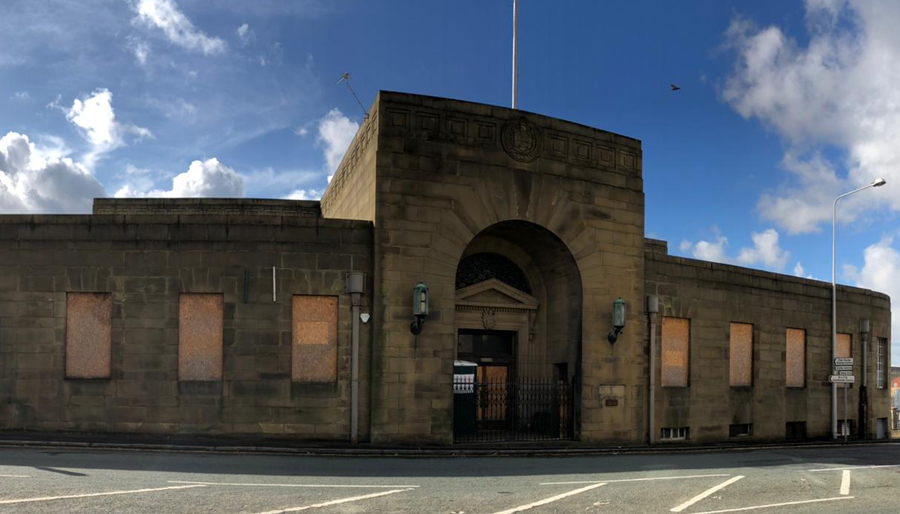 🖤
The grade II listed building, also known as the "urban lockup", is situated on the edge of Accrington town centre and was previously jointly used as a magistrates court and police station by the Accrington division of Lancashire Police.

Since the police moved out in 2016, the building has been abandoned and become a popular haunt for paranormal investigators. The activity experienced at the building is said to range from unexplained knocks and bangs through to loud footsteps and disembodied voices and slamming doors. 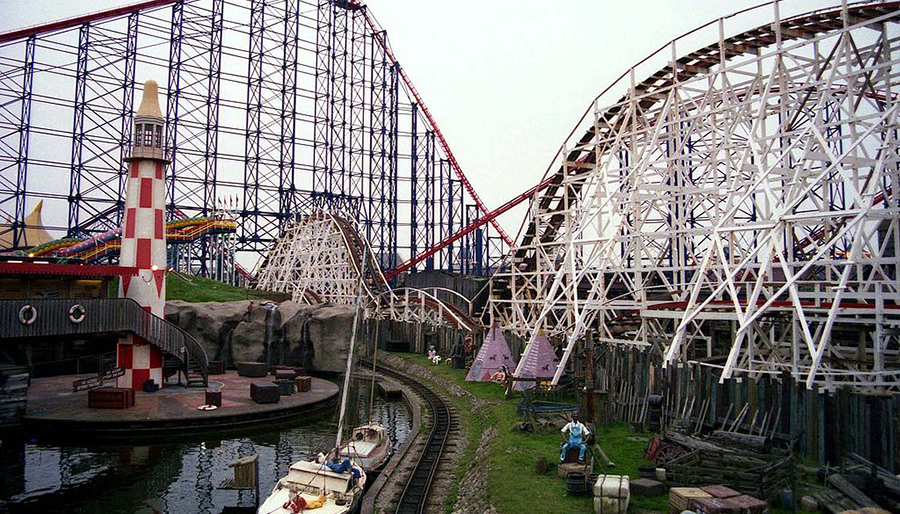 Photo: © Steve Daniels
A theme park conjures up images of fun and games and seems a world away from the gothic towers of a classic haunted house, but the historic Pleasure Beach in Blackpool is said to be a hotbed of poltergeist activity.

Before the advent of the railway, Blackpool was no more than a small seaside village, a far cry from the bustling resort it is today. Since opening in 1896, the pleasure beach is the town's most famous attraction and it's grown in size over the years.

By day the park is a tourist attraction that draws in around seven million people every year, many of whom don't realise it's haunted. Although the pleasure beach is a place of fun, there's not many places creepier than an empty fun fair at night.

The two most paranormally active locations are said to be the gift shop, which is underneath the Sir Hiram Maxim's Captive Flying Machines ride. The spirits of children, often a young girl, have been sighted here and staff have reported poltergeist activity, in the form of objects flying off the shelves and moving around at night.

Another active location at the pleasure beach is the ghost train, which is said to have a real mischievous ghost called Cloggy. The spook gets its name from a former train operator who used to wear clogs. Staff and visitors have heard the sound of his shoes tapping on the floor as his spirit walks behind them. 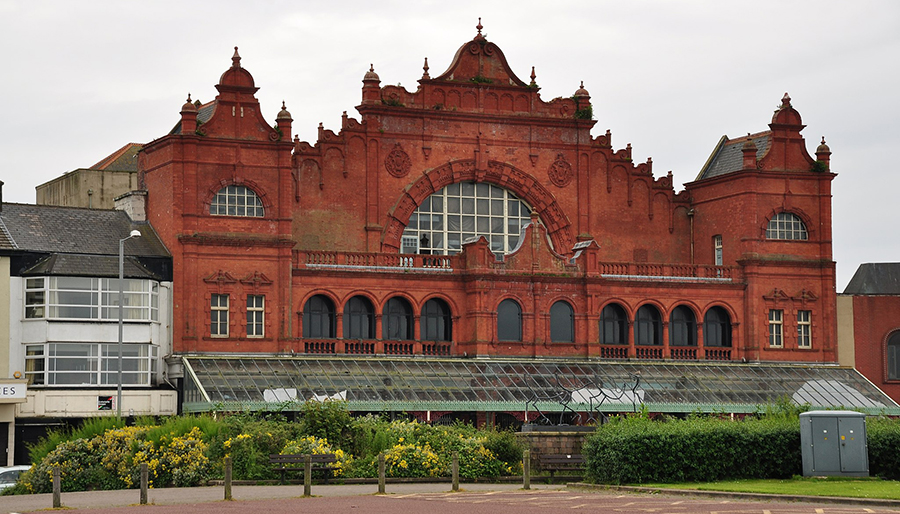 Photo: © Nilfanion
Originally built as the Victoria Pavilion Theatre in 1897, but closed in 1977 due to a fall it profits. The building once house a ballroom, but sadly this part of the building was demolished in 1982, a campaign to restore and preserve the rest of historic building has been running ever since.

The most haunted part of the building is said to be the main auditorium, where shadows have been seen moving across the stage and witnesses have reported being pushed, slapped and poked by an unseen force. One of the theatre's dressing rooms is believed to be haunted by the spirit of a seamstress who died having not realised her dreamed of becoming a professional dancer. There's also the ghost of young boy who's spotted running through this part of the building.

Other haunted hotspots include the the bar and in the many stairwells and many visitors have reported hearing disembodied footsteps, unexplained voices and strange sounds.

Photo: © Tim Green
Pendle Hill is famous for its history of witchcraft, murder and execution. In 1612, 12 people were accused of a spate of local murders and witchcraft was said to be involved in the killing. The twelve witches lived in the area surrounding Pendle Hill and were charged with the murders of ten people 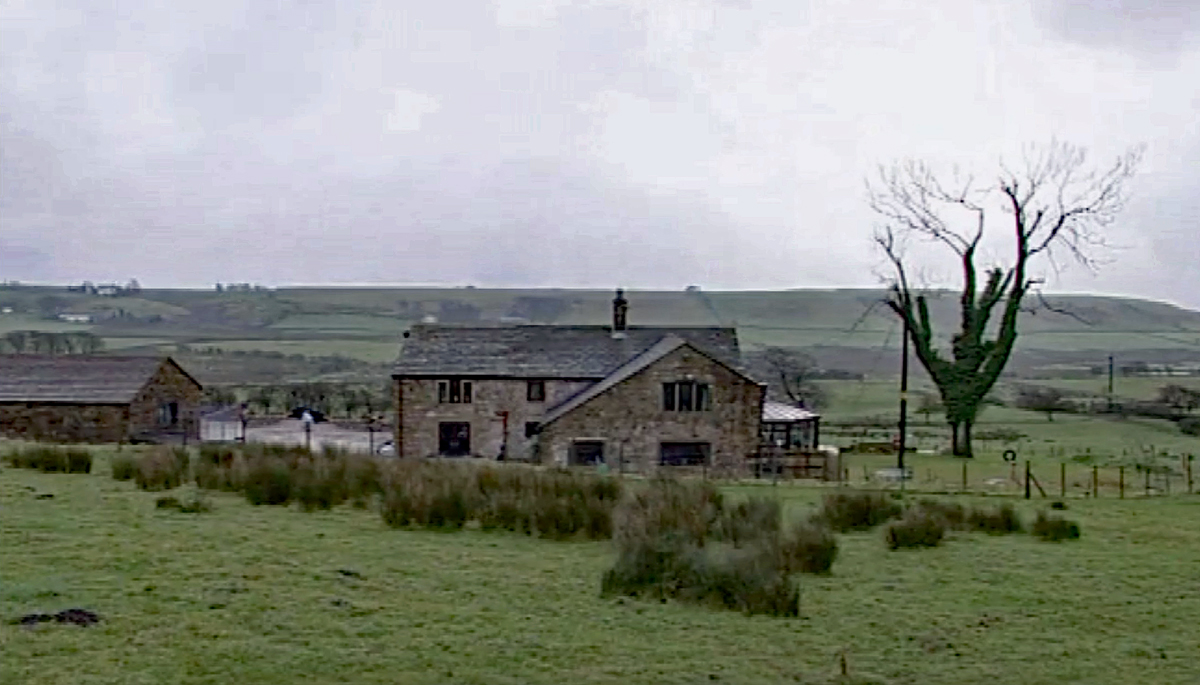 Lower Well Head Farm is a remote farmhouse built around 1660 that was made famous due to its appearance an infamous 'Most Haunted Live!' back in 2004. Due to its location at the epicentre of Pendle and due to the fact that older dwellings existed on the land before the current house was built, Lower Well Head and the land around it was alleged to play host to witchcraft. Many of those accused of witchcraft were executed during the 1612 Pendle witch trials.

Is it the spirits of the condemned witches or those of their alleged victims that still roam the house and wider area in the form of tall dark figures? Unexplained screams and whispers are also frequently reported. Others have reported the sensation of being strangled by unseen hands, and a mischievous spirit has been blamed for opening and closing the bedrooms doors.
This is an ever changing, dynamically updated page. Haunted locations may move up or down the list as new locations are added to our database and scores are reviewed to reflect new activity.
Tags:
paranormalghostshaunted britainlancashire