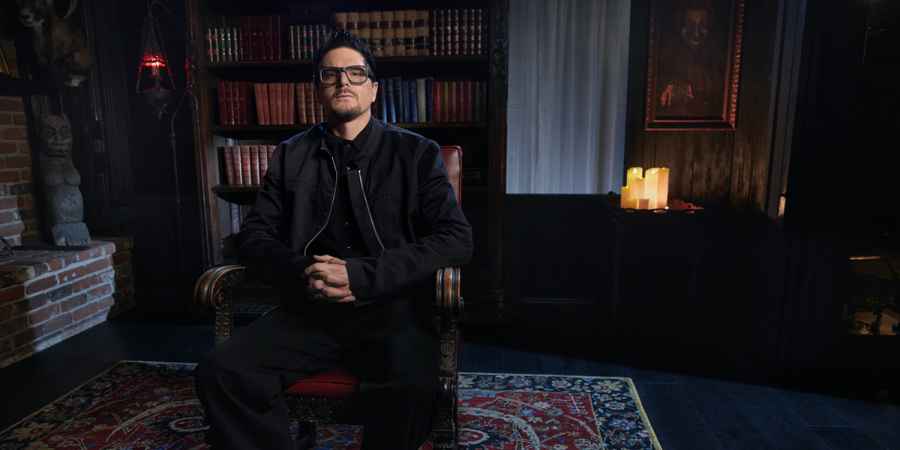 Frightening tales of cursed objects are brought to life in new scripted horror series, 'The Haunted Museum' from 'Ghost Adventures' star Zak Bagans and filmmaker Eli Roth.
Horror-loving fans get ready as the renowned filmmaker teams up with television's biggest paranormal investigator in 'The Haunted Museum', a spine-chilling new scripted series that brings to life the terrifying tales of the world’s most haunted and cursed artefacts.
Launching with two episodes on Saturday, October 2, exclusively on Discovery+ during the streaming platform's Ghostober event, the nine-episode series features a collection of short horror films inspired by the frightening relics on display in Zak's Haunted Museum in Las Vegas. Each episode presents a chilling cinematic story of a ghoulish object from Zak's eerie collection, scripted and produced in collaboration with Eli Roth and featuring exclusive commentary from Zak about its hellish history.
An enthusiast for all things haunted, Zak has amassed a collection of thousands of creepy artefacts from all over the world, exhibited across a sprawling 30-room, 14,000-square-foot mansion museum. Here, brave visitors come face-to-face with a plethora of spooky memorabilia that span paranormal legends, true crime, Hollywood pop culture and haunted history. But among these relics are a group of items that are particularly sinister, inducing nightmarish experiences – fainting spells, chills, convulsions, scratches and disturbing bad luck.
Now, these cursed objects take the spotlight in 'The Haunted Museum', as Zak and Eli join forces to tell their ominous stories in a frightening format. Eli – the modern master of horror and creative force behind such films as 'Cabin Fever' and 'Hostel' – along with his accredited team of writers present the frightful tales behind Zak's most feared items through innovative and evocative horror shorts. Experience the supernatural scares behind Peggy the doll, the Devil’s rocking chair, Charles Manson's cursed television, an antique mirror with an evil attachment, the Westerfeld dollhouse, a wooden tribal cursed statue, "spiritual equipment" that may be a portal to a demonic dimension, the 'Demon House' staircase and the infamous dybbuk box.
"While all of the collectables in my museum have dark and unusual backstories, these items are especially fearsome because of the intense, evil energy they contain," said Zak. "Their power is scary as hell, and I've never seen anything like it. Eli Roth is a mastermind at authentically evoking this terror and the very real fear brought on by these objects through his incredible visual storytelling. The horror is palpable. This is the scariest thing you will ever watch."
"Never before have I been involved as a producer in a project this scary,” added Eli. "I believe this show could go down as one of the scariest anthology horror television shows of all time. I am so excited to bring these terrifying stories to homes in time for Halloween. Working with Zak has been a scream, he was so helpful in guiding the stories of these horrific objects that most people would be too scared to even look at. There has never been a show where you can see a terrifying story and then visit the real cursed object in person after, if you dare. I stand behind my claim this will be the scariest show you will watch this Halloween season."

Episode 1: 'Dollhouse Of The Damned'
When a recently widowed father brings home an enormous dollhouse as a birthday gift for his teenaged daughter, she quickly rejects the present, sensing there is something "not right" about it. But he quickly falls under its powerful spell. He loses himself within it, using the tiny rooms to stage meticulous recreations of the happiest moments of his life with his wife. Yet all is not well within his own house, as his daughter begins to experience terrifying visions that she fears may be something incredibly evil. Following his discovery of a secret spell hidden within the dollhouse, the father embarks on his most dangerous course of action yet, using the spell and the power contained within the dollhouse in an attempt to raise the spirit of his dead wife. The ritual culminates in a terrifying night that finally reveals the dollhouse's horrifying occupant and its true intentions.
Episode 2: 'Monster In The Machine'
While using special machines designed to communicate with the spirit world, Esther, a misunderstood genius, unlocks a dark gateway between reality and a sinister realm, unintentionally summoning a being of pure evil.

Episode 3: 'Chair Of The Beast'
After invading a family home, a terrifying demon possesses the youngest son and claims the family’s rocking chair as its own. Desperate for help, they turn to a local priest who must engage in a dangerous battle to drive out the demon and reclaim the boy’s soul.

Episode 4: 'Helter Skelter Station'
After receiving a cursed television from America's most infamous cult leader, Charles Manson, a young criminology student begins to slowly lose his grip on reality. Can he resist the dark pull of the TV, or will he succumb to its spell and become the latest "family member" to kill in the cult leader's name?

Episode 5: 'Possessed By Peggy'
A British paranormal investigator faces great danger when she attempts to unravel the mystery surrounding one of the most infamous and dangerous paranormal objects on the planet – a haunted doll with the power to harm anyone who lays eyes on it.
Episode 6: 'Tribal Statue Terror'
A delivery driver, haunted by his past and struggling to provide for his growing family, agrees to transport a strange tribal statue across the country for a large fee. But, as the statue gradually reveals its dark power, his journey descends into a terrifying nightmare.
Episode 7: 'The Murder Mirror'
A young woman attempting to win a scholarship to a prestigious music academy must confront an evil spirit trapped within an old family heirloom.
Episode 8: 'Demon Under the Stairs'
After moving into a rental house in Gary, Indiana, a young mother discovers that the home is already occupied by a terrifying tenant. A sinister presence seems to exist in the basement, one that is keenly interested in her children. She must fight to defend her family from a terrifying demon that has invaded her home and now threatens to possess her three children.
Episode 9: 'Curse of the Dybbuk Box'
A skeptical college professor must re-examine his beliefs and face his greatest fears as he struggles to unravel the mystery surrounding one of the world’s most dangerous paranormal artefacts, a cursed antique that contains a terrifying entity hellbent on torturing the living.
Tags:
televisionzak bagansparanormaltopicaldiscoveryplushalloweenhalloween 2021ghostober