This article is more than four years old and was last updated in April 2022. 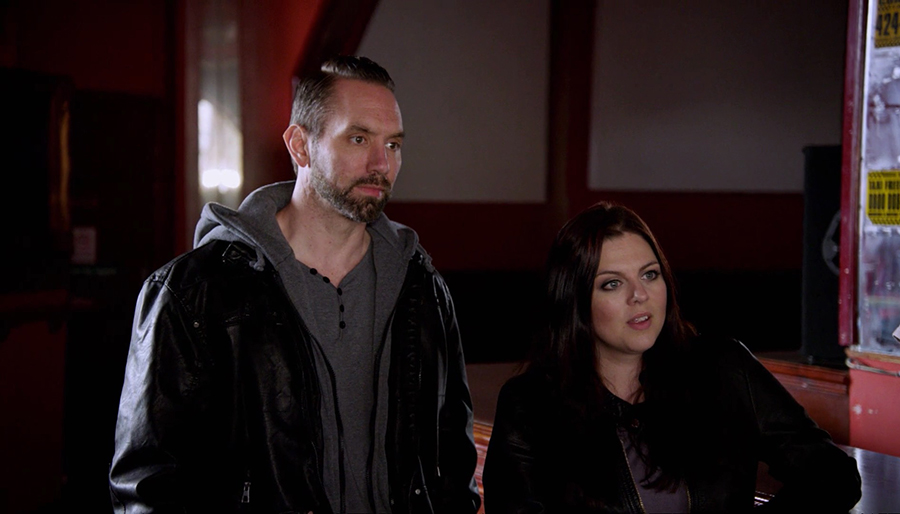 In the fourth episode of Quest Red's newest ghost hunting show, paranormal investigators Nick Groff and Katrina Weidman spend 72 hours locked inside of the Abandoned Park Hotel, in the sleepy coastal town of Morecambe.
The grand hotel, which now stand abandoned on the seafront, was built in 1895 by Edmond Park, the luxury hotel attracted England's wealthiest and most influential, but it was rumoured that after hours Park held séances and strange occult rituals.
He mysteriously disappeared in 1899, never to be seen again. Many think that he was murdered in the hotel, cursing the property and his spirit has never left. The story of the curse it well known throughout the town.
Locals say a young soldier drowned in the sea and was brought back to the hotel, where he was pronounced dead. They also tell the tale of a woman named Emma Manson, who was murdered by her husband on the second floor and his body was found hanging in the tower. Another man took his life on the tower too, hanging himself from the outside. Apparently, these are all undocumented and unconfirmed deaths, but could there be some truth in these urban legends?
Staff and visitors in the hotel have heard disembodied screams, seen phantom apparitions in the hallways and witnessed a child spirit roaming the building. Lights are said to turn themselves on and off and the property's manager has even caught a demonic face on CCTV.
The hotel's owner, Martin Shenton, has asked Nick and Katrina to carry out an investigation at the hotel, before he continues his renovations. The US paranormal investigating duo are the first team to be given the chance to investigate the building. Martin says he's not a believer, but "things happen that you can't explain."
Upon entering the hotel, Katrina said, "I instantly feel transported back to another time, it reminds me a little bit of horror movies but also these kind of fantasies I've had about what it must have been like to be in that time period." Nick adds, "it's very haunting, it's very chilling." 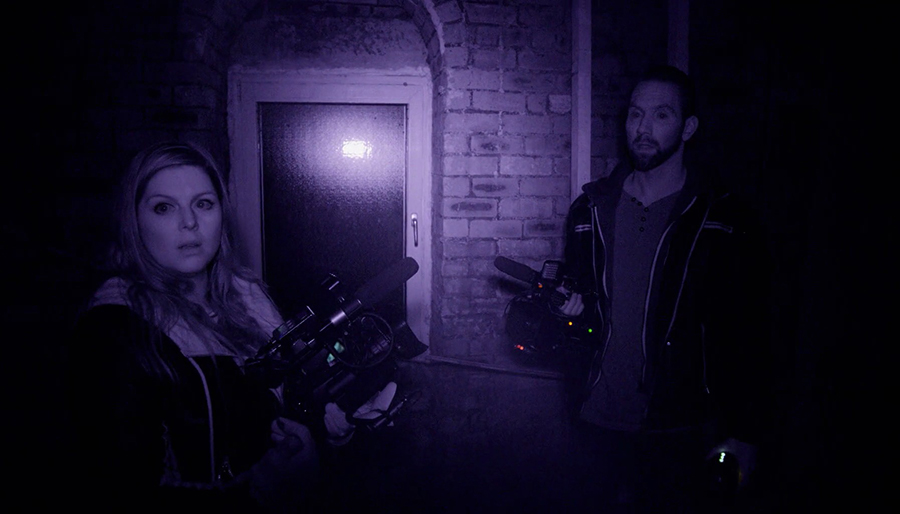 As darkness falls outside, Nick and Katrina are locked into the property for the start of their 72 hours long investigation. On the first night the aim to work their way through the hotel floor by floor. Things started off quietly, but while they were in an eerie room on the third floor, they heard what was clearly a woman screaming.
The sound was clearly audible on camera and the duo went to try to find the source of the sound but couldn't find where it had come from. Katrina said that the sound had come from somewhere inside the building, but it's not clear how they eliminate the possibility that the sound came from outside.
While stood at the foot of the steps to the tower, Nick pulled out a ghost hunting gadget which had a data bank of phonics, it's said that ghosts can use these sounds to communicate. Nick called out to any spirits that might be present asking if there's any one here, a response came through "up here". Nick and Katrina took this as an indication to go up into the tower, but moments later the echoey voice said "come down," so they left this area.
I don't really understand how time works on this show. They always start the lockdown at hour one with the sun setting, but now 17 hours into the investigation it is still the first night. That means if the sun set at 7pm, by hour 17 it should be about midday, but in the hotel it still seems to be dark outside and they haven't been to bed yet. So, they decide to split up and try to get some rest.
Katrina chose to sleep in the lounge, the area the Katrina already finds the creepiest and a room where the paranormal activity includes a gramophone turning itself on. Nick slept in the tower, a place where people have reported feeling sick and like they're being strangled. They woke up a few hours later, after what seemed like a peaceful few hours sleep, but there was a lively start to the day.
Nick went to wake Katrina up and while trying to talk her into getting up, a door behind him seemed to close on its own, causing Nick and spin around and swear. Nick described the event as the door "flying towards him" as if it was trying to hit him. While Nick was scared, it wasn't enough to get Katrina out of her sleeping bag.
During the day the conducted an experiment with Katrina monitoring the ghost communication device in the tower with its 360 degree view of sunny Morecambe, while Nick was on a lower floor calling out questions to the spirit of the murdered woman, Emma. Nick asked the spirit to go to the tower and tell Katrina what happened to her. Katrina heard the phrases "I'm here" and "it's bright". The responses seemed to match Nick's questions. 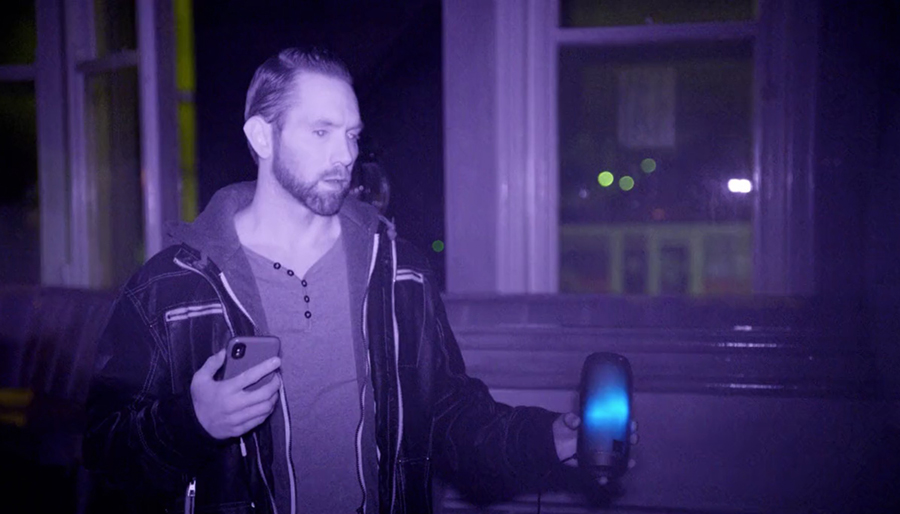 After night fall, the duo resumed their investigation in the nightclub area of the hotel. They were using the EchoVox app on a smart phone to try to communicate with the spirits. Not long into the investigation, Katrina felt like she had been touched.
They move through into the parlour room, where they heard a strange "swishing" sound coming form the hallway. They went to investigate and found that ballroom door had closed on its own. They pair the went to walk upstairs and both reported feeling unbalanced and as if they were being pulled down for a moment. Nick felt like he was close to falling.
After the incident, Nick said "as we're analysing the door, I'm taking a couple of steps up on the staircase and all of a sudden I just feel dizzy and all of the energy is just absorbed out of my body." Because of all these creepy goings on, Nick decides to sleep on this hallway.
Meanwhile, Katrina sets up her bed in room two, which she described as a "super creepy room". It's the room where Martin, the owner, once found the window was fully open, even though no one has been in there, and people feel emotional in this room. Again, they seem to have a quiet night, but didn't get much rest.
On the third and final night they set up an experiment in the parlour, where they'd had the most activity. They had a 3D mapping camera which is supposed to look for human-like figures that the eye can't see and across the doorway, Nick placed an LED panel which lights up if anyone passes over it. This was the door that had closed earlier in the investigation.
While conducting the experiment they used there spirit communication device and heard a female voice, say "I'll get you." Katrina commented that it sounded like a witch, then seconds later a male voice said, "that's the witches" and "the witch of".
Nick crossed his LED light barrier and into the room, where he instantly said it felt like something was pushing him. Katrina then tried calling out to the spirits and a voice said, "shut up, bitch." Nick then walked out of the room, walking over his LED light panel and causing it to flash brightly.
Nick asked the spirit to follow him through the door and seconds later the LED panels lit up as if something had indeed passed through the door. They then heard a sound coming from upstairs and went to investigate, but things then seem to go settle down. Nick described it as going "eerily quiet," and with that, the investigation came to an end.
You can watch 'Paranormal Lockdown UK' on Thursday at 9pm on Quest Red. Watch on Sky channel 149, Virgin Media channel 215 and Freeview channel 38, or on demand via QuestOD.
Tags:
paranormaltelevisionparanormal lockdowntopicallancashirenick groffkatrina weidman