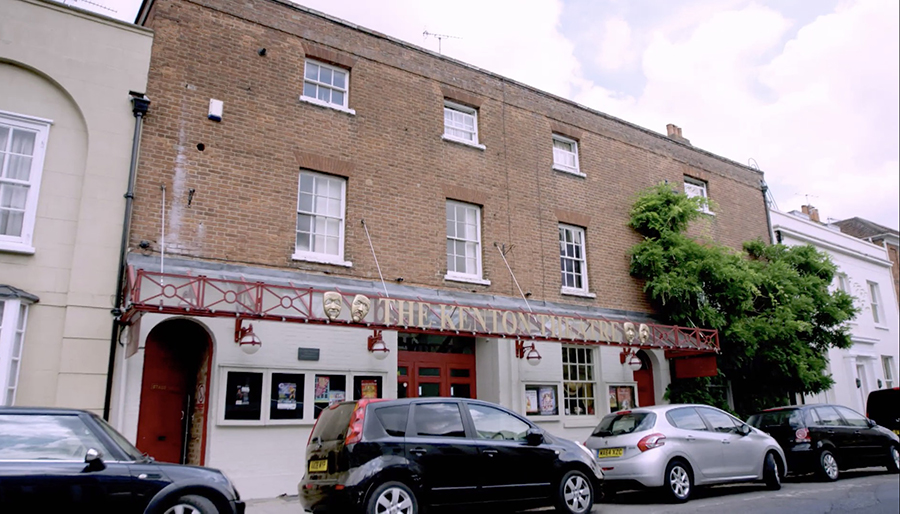 In the ninth episode of Quest Red's newest ghost hunting show, paranormal investigators Nick Groff and Katrina Weidman spend 72 hours locked inside of the fourth oldest working theatre in the UK. The Kenton Theatre in Henley-On-Thames is said to be home to an unwanted spirit has been blamed for breaking mirrors and turning lights on and off.
The regency theatre has been known for decades as one of England's most haunted stages. Since it was first built in 1805, the building has been a school, a church hall and a clinic for soldiers, but since the 1960s when it reopened as a theatre, the paranormal activity seems to have intensified.
Many of these reports feature around the town's most infamous past residents, Mary Blandy. After poisoning her father by putting arsenic in his tea in 1751, Mary was convicted and hanged for murder, but in the century since her death people all over Henley have claimed to see her ghost.
In 1969, the Kenton Theatre played host to a run of performances of The Hanging Wood, that tells for story of the life and death of Mary Blandy. During the show's rehearsals and performances Henley's most famous spook became forever linked with the theatre. Cast members reported seeing a phantom woman dressed in grey at the back of the venue, a shadow figure lurking in the staging rigging, and a teacup rising from a table before dropping and smashing.
In the 50 years since the show's run, paranormal activity has continued throughout the theatre and Nick and Katrina wants to get to the bottom of the claims. Before the investigation, Katrina said, "I really wanted to investigate the Kenton Theatre because it's one of the oldest theatres in the UK. I've investigated quite a few over the years and they've always turned out to be really great investigations." 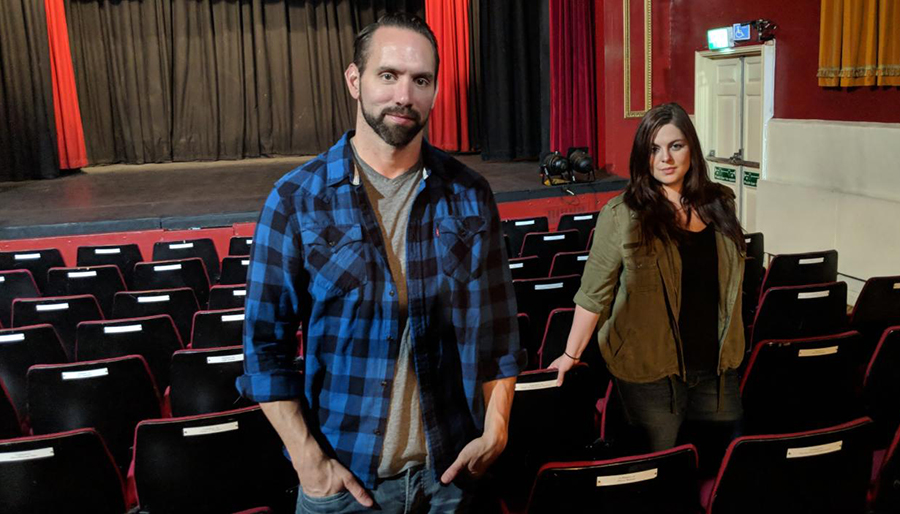 Once it was dark, Nick and Katrina started their investigation on the stage, where straight away Nick thought he saw something move in the front rows. He said, "I saw a shadow move like that, really quickly". Nick then called out to the spirits and asked if there was anybody here with them, they got the name "William" through on the Geoport, a device which scans through phonetic sounds and allows. spirits to form intelligent responses. They also heard the sound of crying coming through the device's speaker.
Later the pair were on the balcony, where Katrina had just seen a shadow figure that they failed to catch on camera. She asked out, "who did I just see?" and got the response "murdered," which didn't seem in content or intelligent, but the paranormal investigators took it to be fact and asked "who was the murderer?" But they didn't seem to get a response.
As their first night drew to a close, they split up to sleep. Nick decided to sleep on the stage, as you would if you were in a theatre. Katrina set up her bed in on the balcony. Their night was mostly quiet, although Katrina did hear what sound like something moving around her bed at night. An audio recorder that Nick left recording over night capture some strange crackling sounds during the night. 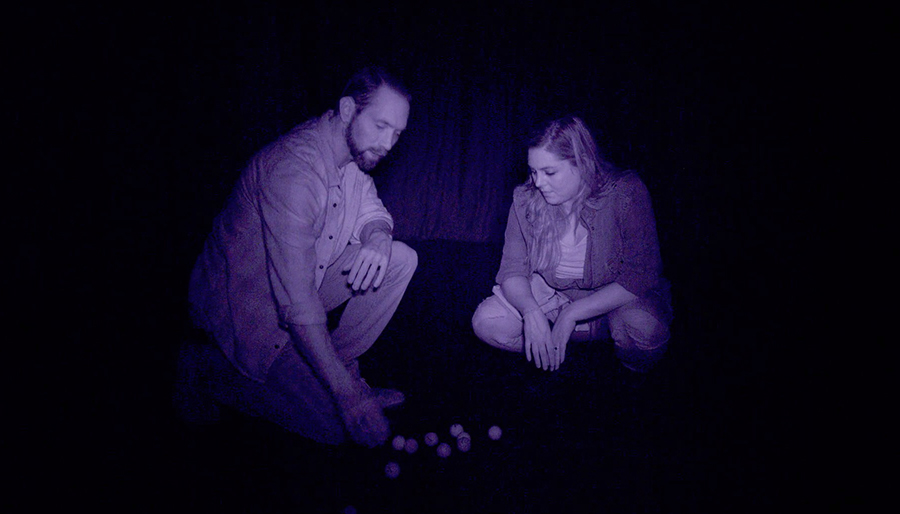 Day two started with the duo back up on stage trying to communicate with the spirit of the theatre. Nick climbs up into the rigging, as he does he hears a trapdoor on the stage slam. After being in the rigging for about three seconds and not actually doing anything there, he says "right, I'm coming down". Presumably he was up there for longer but they edited it out because nothing happened.
On night two, they set up various gadgets on the stage and stood in the middle of the stalls and called out to the spirits. Again they had some responses through the Geoport, first saying "medicine", Katrina asked what they needed medicine for and it said "a disease". They then heard a tone, this was a movement detector they'd setup on the stage curtain. They ran to the stage and while there Nick swore he saw a shadow move at the back of the theatre.
Katrina called out, "who is this that we keep seeing?" She was then shocked when she heard a sound come from the stage. So, of course they then run back to the stage where the Geoport says "Sarah" and then the word "sick". 38 hours into the investigation, Nick and Katrina split up to sleep, although 38 hours should place them at about 10am, as hour one and hour 24 were sunset. For night two, Nick sleeps backstage, while Katrina sleeps in the orchestra pit. 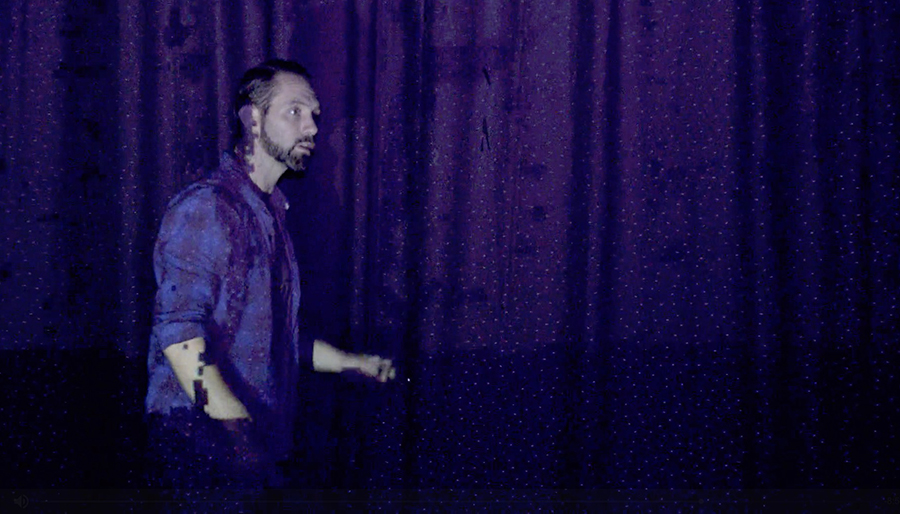 On the final night, the investigators set up a 3D mapping camera pointed at the stage and projected its output on to the curtain. This type of camera looks for human-like shapes in its field of view. During the investigation a weird black mass formed in the centre of the shot. It didn't appear to be mapped or recognised by the camera's detectors, but it was visible. It's just not really clear exactly what you are looking at with his type of camera as the images is already flickery and just shows blocks of colour instead of a true image, so a black blob could be anything, it may not even necessarily be black in colour. Nick said it looked like "energy".
A little while later, Nick and Katrina were still down in the stalls when a stipe of LED lights connected to a motion detector that they'd placed on the balcony lit up, indicating that something had moved in that area.
With that, the investigation came to an end.

I'm not too sure about this week's location. The show sold it as being a famous haunted theatre, Katrina even says she always wanted to investigate it. However, having lived in London for ten years and knowing Henley-on-Thames, I've never heard of its haunted reputation.
Paranormal Lockdown continues on Thursday 1st November at 9pm on Quest Red. Watch on Sky channel 149, Virgin Media channel 215 and Freeview channel 38, or on demand via QuestOD.
Tags:
paranormaltelevisionparanormal lockdownlondontopicalnick groffkatrina weidman