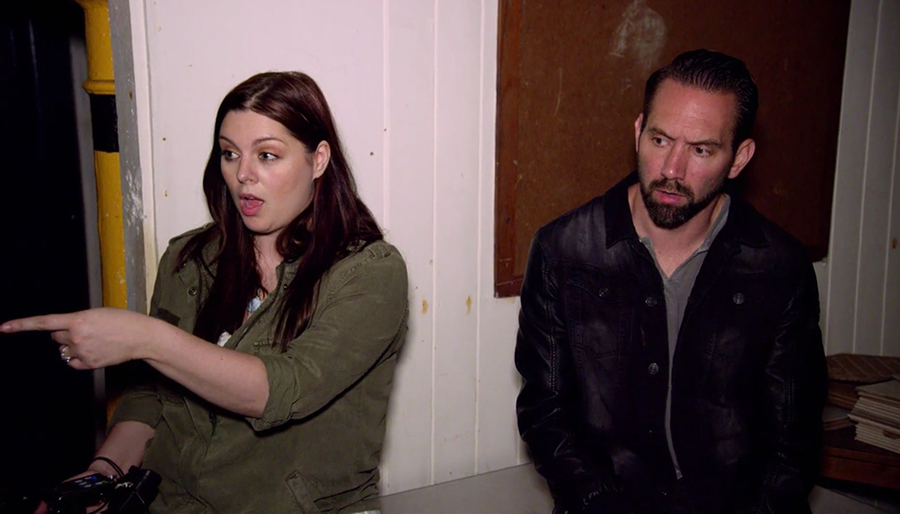 Nick Groff and Katrina Weidman visit the Mill Street Barracks in St. Helens, which has been home to thousands of soldiers since its construction in 1861. They'll spend 72 hours locked inside the building validating the building's haunted reputation.
The barracks saw active service during both world wars and soldiers were stationed there for months before being deployed to the frontline, many never returning home to their loved ones. After WWI it was used as an isolation unit for tuberculosis patients, housing men, women and children as they struggled with the terminal disease. During the German bombing raids over industrial cities in Northern England during WWII, the cellar of the barracks was used as a mortuary for fallen citizens and soldiers, holding hundreds of bodies for weeks as they awaited burial.
The barracks is said to be home to plenty of paranormal activity, most notably the ghost of a former caretaker's dog, called Bruce. The building's largest room is the drill hall, where visitors report phantom footsteps, marching and disembodied voices. Tables and chairs move on their own and shouts echo through the empty building. In the basement, many people have reported feeling a strong negative presence in the dark back rooms and the apparition of a woman known as Claire has been seen.
Before their investigation, Katrina said "I have a couple of goals for this investigation. I'd really like to find out about this negative energy. My other goal for this investigation is to a figure out who is Claire." 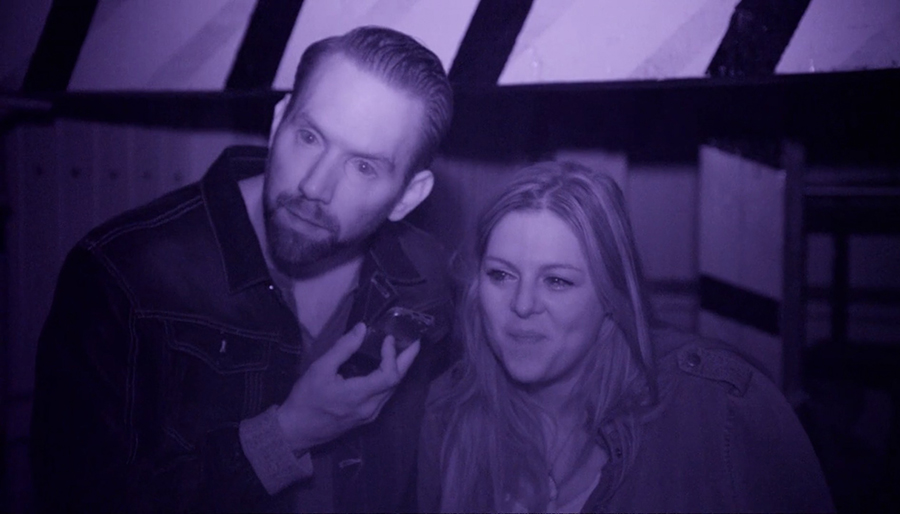 The duo started their investigation in the drill hall, where there are rumours that a nurse once hung herself here and the voices of children, believed to be TB sufferers, are heard. Nick and Katrina set up a circle of chairs in the middle of the room, as furniture as been said to move of its own accord.
After setting all this up, they called out to the spirits for a couple of minutes and then Nick said he was being drawn towards the basement door. So, they left a camera pointing at the chairs and went down to basement. However, they were only in the cellar for seconds before hearing something that they thought sounded like something being dragged on wood floor above them through the spirit box device they were using. They thought it might be a chair moving, so went back upstairs to check.
When they got back to the drill hall they found that one of the chairs in their circle had moved and the movement had been captured on the camera in the room. The footage was quite impressive, especially as it was shot with a very wide angle so you can seen that the whole large room is empty. Nick said, "I'm absolutely blown away by this. We've captured amazing evidence."
Later, back down to cellar, Nick and Katrina attempted to capture spirit voices as EVPs using an audio recorder. At one point, they captured what sounded like rustling or static, basically just noise, but they both agreed that it was a voice saying "I'm Claire". This was followed by what sounded like a dog panting.
They then split up to find somewhere to sleep for the evening. Katrina made camp in the middle of the circle of chairs in the drill hall and Nick stayed in the cellar. While sat on his camp bed, Nick said he saw a shadow rush past a door. "It moved so fast by this door. Right behind me I could see this shadow move." He went to investigate but found nothing.
After an uneventful and peaceful night, the pair awoke at what seemed to be the next morning, but should have technically been the next afternoon as the caption on screen said "hour 18" and they started their investigation the previous evening. During their second day they used a speech synthesis app. Nick explains that the app scans through random phonetics and spirits can interact and use it to form intelligent responses. They started by calling out, "is Claire down here?" and a voice through the device replied, "this way" which seemed fairly in context and relevant, perhaps and intelligent response.
They then got a very clear voice saying "Bruce," which is said to be the name of the ghostly dog that haunts the building. Katrina called out "Bruce, can you jump over those lights" and the motion detecting panel of LED lights that they had set up across the cellar floor instantly lit up. This is even more impressive because a living dog wouldn't understand that command. 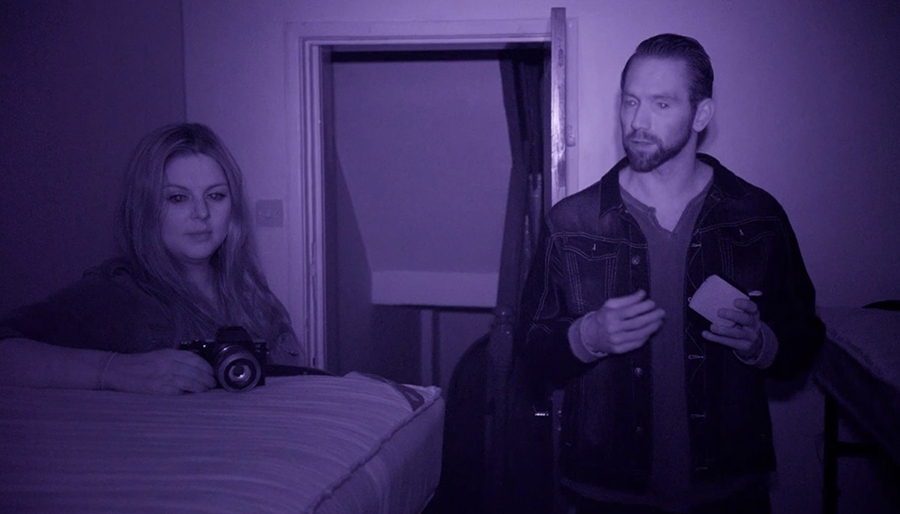 We then see a shot of the exterior of the building and the sun is setting, a caption on screen tells us that it has been 34 since they started their investigation at the previous sunset. Clearly, the spirits are effecting the flow of time in this building some how.
Back inside the building, Nick and Katrina were in the bunk room where people have heard whispering and footsteps on stairs. The investigators were using a device called a Phasmabox, another type of voice synthesis device and before long they heard the sound of a dog bark through the device. Katrina then reported seeing a light anomaly, which she described as being crescent moon-like.
That night Katrina slept in the bunk room, while Nick slept in the drill hall. But, not only did he sleep there, the next morning he did a bit of a workout there, a few pushups, a bit of running around... it was a little odd to include it in the show, but this week's episode did feel a little light on content and padded out with additional recaps during an evidence review session.
On the final night in the barracks, Nick and Katrina investigate the cellar one more time. First off they hear a noise comes through their device which Nick thinks sounds like "f**k that". Then they both freak out over seemingly nothing, after Nick says that they had heard what sounded like "a lightning bolt strike the room", but it just sounded like the usual kind of distorted noises that speech synthesis devices make.
Katrina then asked "what's behind these walls?" And a slightly clearer voice said "portal", but then they were distracted by a beeping sound which was coming from a motion detector they'd set up on a chair in the drill hall. There chair didn't seem to have moved, perhaps the alarm scared him off.
After just seconds in the drill hall, they heard a voice through the device which said "downstairs", so it was back to the basement. Where Nick says "I feel like suddenly all the energy we were interacting with has become calm." This signalled an end to the pair's investigation. It was an interesting episode and a unique location, in that it hasn't featured in any other paranormal shows, but the episode wasn't as strong as others in the series.
Paranormal Lockdown continues on Thursday 25th October at 9pm on Quest Red. Watch on Sky channel 149, Virgin Media channel 215 and Freeview channel 38, or on demand via QuestOD.
Tags:
paranormaltelevisionparanormal lockdownmerseysidetopicalnick groffkatrina weidman