The ParaPod Special 2018: Robert The Doll 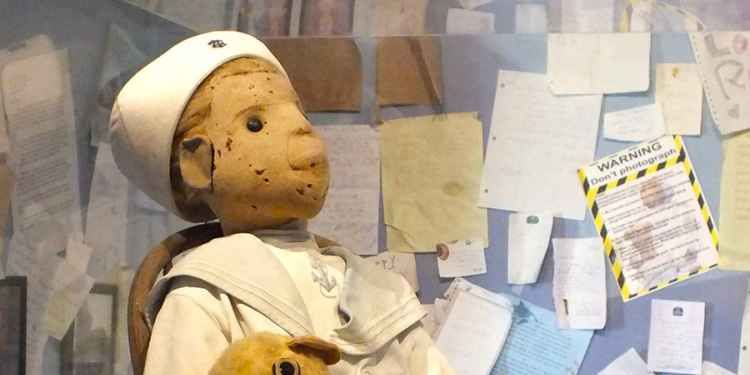 Photo: © Cayobo
With the excitement of the ParaPod movie looming at some point in the future, Ian Boldsworth and Barry Dodds return for a one-off special edition of the podcast. The episode was released exclusively to Ian's Patreon backers a week ahead of its general release and it included an additional 20 minutes of audio.
The podcast returns to its origins with hardcore believer, Barry, trying to convince skeptical Ian that his ghost story, or "featured hauntings" is true example of the paranormal. This time, Barry wanted to share with us the story of a creepy doll, known as Robert.
Barry starts off by telling us, "I came across something that I thought was interesting. I didn't just want to bring a ghost story, so I started thinking about haunted toys and I found out about Robert the doll." According to Barry, the three-foot tall doll was owned by Eugene Otto, of Key West, Florida.
The doll is dressed in a sailor's costume and holds a dog, and Barry says no one knows exactly where it came from, but Barry said Eugene got it as a gift from his gran from Germany.
Barry says that the Ottos' maid was sacked after she was caught doing voodoo, which he describes as "magic from Jamaica... or Haiti and all them places." Ian stepped in at this point and told Barry that if he doesn't know what voodoo is then he has to acknowledge it, he told him, "later on, it's going to be put down that this doll was all f**ked up because of the lady doing voodoo, but you don't even know what voodoo is."
But Barry promises, "I'll come to it," and continues... "they caught her doing voodoo, so they sacked her. On her way out, she did another spell, which cursed the doll." At this point Eugene was still a child, he loved the doll and carried it everywhere with him, took it to bed every night, and even used to whisper to him, but then Robert started whispering back.
According to the legend, the doll then started trashing Eugene's bedroom and the rest of the house. According to Barry, when the boy's parents ran upstairs after hearing the noise, Eugene was just sat there and said "Robert did it." Ian obviously questioned this, wanting to know why the parents believed that a doll destroyed the room, when the more logical explanation is that Eugene did it.
But as Barry went on, the story didn't make any more sense. He said that "eventually Eugene's aunty came round and was like, 'this doll's not good, stick it in the attic'." After doing so, apparently, she died. Ian couldn't understand why they wouldn't just bin, burn or otherwise destroy this evil doll, rather than just sticking it in the attic. Ian said, "it doesn't make any sense that they would put a doll that was being destructive in the house just in the loft, because it's still in the house, it would just trash the loft."
Eventually Barry said, "OK, I admit the loft move was weird," but he maintained that the story is real and tells Ian that the doll is now on display in a museum, the East Martello Museum in fact. According to Barry, Eugene forgave the doll for killing his aunty and kept it on his window sill until his death in 1974. Something else Ian thought was odd.
Weirdly, it seems that after his death, the house was sold on to Myrtle Reuter and that sale included the doll, another point Ian picks Barry up on, "it doesn't happen that, mate. The doll wouldn't come with the house," Barry agreed.
Eventually in 1994, Myrtle donated the doll to the museum, where it sits in a glass case today and is said to still roam around at night. Ian points out there's obviously not any security cameras at the museum, or we'd have seen the footage.

As usual, it was a clear win for Ian. He picked Barry up on many parts of the story that were just ridiculous. Why did the family put a destructive doll in the attic? Why did Eugene forgive the doll after it killed his aunty? Why haven't we seen footage of the doll running around the museum?
Barry basically admitted defeat by agreeing with Ian on every point he raised during the story. Ian told him after, "you've acknowledged every single thing that's been ridiculous." Barry does offer one final possibility in his defence that could explain the lack of CCTV footage, "maybe the physical doll isn't moving but the ghost or whatever haunts it, maybe it's the sound of that moving around."
Robert the doll is quite a famous ghost story and it was great to hear Barry tell it from his perspective and to hear Ian's more rational thoughts on the subject.
It was great to hear the duo back and the podcast only helps build the excitement ahead of the release of the ParaPod Movie. The extended version of the podcast and the early release is another good reason to support Ian on Patreon. You can get access to this exclusive content by supporting his work for as little as $1 a month and you'll also get behind the scenes news, gossip and photo from the podcast and the movie, as well as his other projects.
Ian 1 - Barry 0.