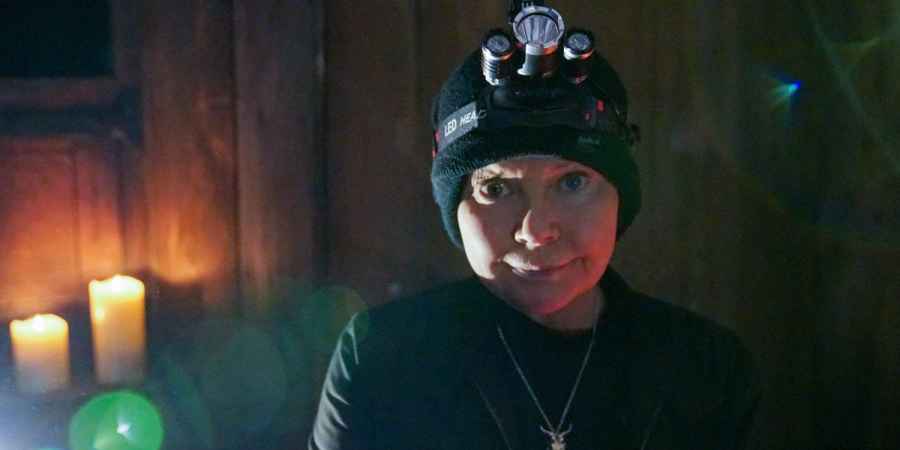 Photo: © Discovery+
'Spooked Scotland' continues on the Really channel and this week Gail Porter takes her team to Culross in Fife as they attempt to contact the tortured souls of those wrongfully accused of making a pact with the devil.
Culross is said to be a hotbed of paranormal activity due to its dark and shameful history at the centre of one of the most infamous witch hunts in Europe. The show's psychic medium, Chris Fleming, tells us, "the town shamefully saw women and men accused of witchcraft imprisoned, tortured and sentenced to death."
According to Gail, "residents here are plagued by disturbing phenomena," and the paranormal epicentre seems to be Culross Palace, where there are reports of a dark presence in nearly every room and visitors have seen an apparition believed to be Sir George Bruce, a former resident and supporter of the witch trials.
The team will also focus on the old Tolbooth next door. It is here that the innocent souls of the accused were hung from the rafters and ever since their disembodied screams have been heard coming from the building.
Chris said, "when dealing with witches, sometimes people were persecuted and they were completely innocent, they weren't a witch or they were just doing healings and trying to help people." He added, "when there's trauma, where there's physical or some type of major event, that leaves an impression." Here in the UK we call this Stone Tape Theory, but being American Chris refers to it as Place Memory.
Chris hopes he can connect with the memory of Culross and communicate with it, to enable him to help those trapped by the past. He hopes to bring them peace and hold those responsible for such unspeakable cruelty to account.
Gail started out in the palace with its caretaker, Linda. She became quite overwhelmed in George Bruce's former bedroom where she felt an unnerving presence. Later as they walked around, Gail felt something touch the top of her head. According to Linda, it's not uncommon for women to feel a cobweb-like sensation on their faces and it's believed this is George touching the women. 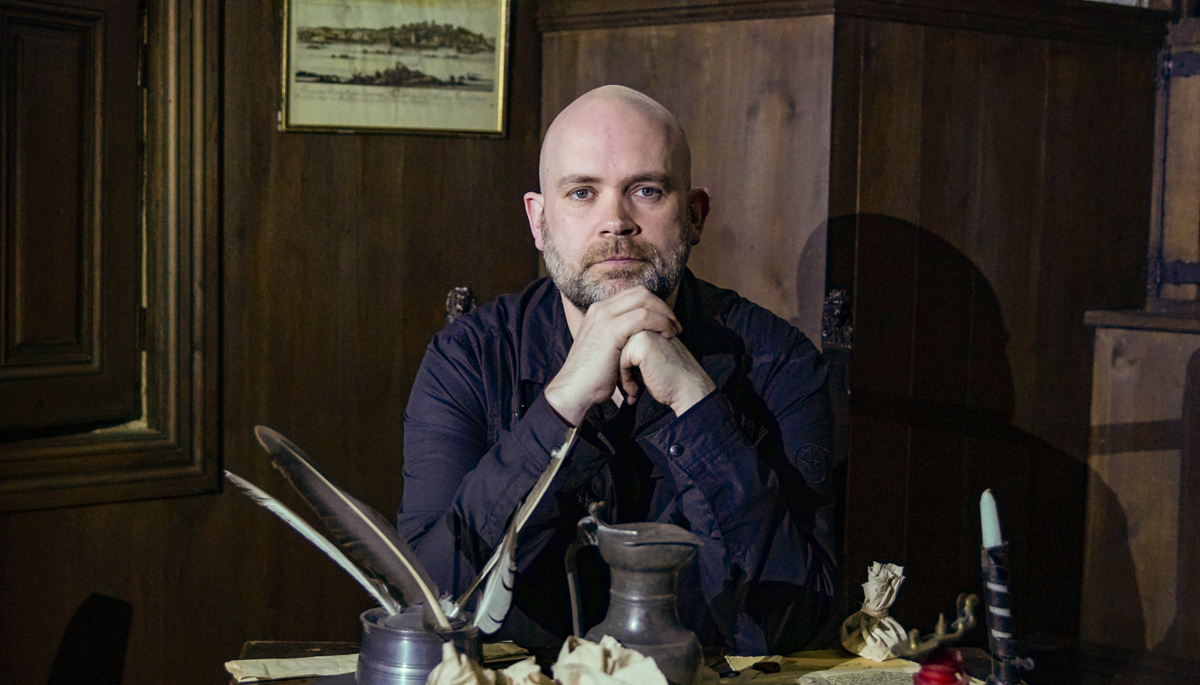 Photo: © Discovery+
Meanwhile, Chris and the show's resident technical expert, Ryan O'Neill, went to check out the Tolbooth next door. Ryan was initially armed with an SLS camera, a special type of camera that uses 3D mapping technology to detect human shapes and highlights them on its screen in the form of a stick figure.
While Chris attempted to communicate with any spirits that might be present, Ryan's camera showed a figure on the screen which they took as confirmation that it was the entity Chris was communicating with showing itself.
This lead the pair to believe that the entities in the Tolbooth are active or intelligent hauntings, rather than residual energy. This should make it easier to communicate with them during their full investigation later in the night.
Before they got underway, Ryan did a sweep of the palace, placing environmental detection devices to measure temperature, humidity, electromagnetism and vibration. 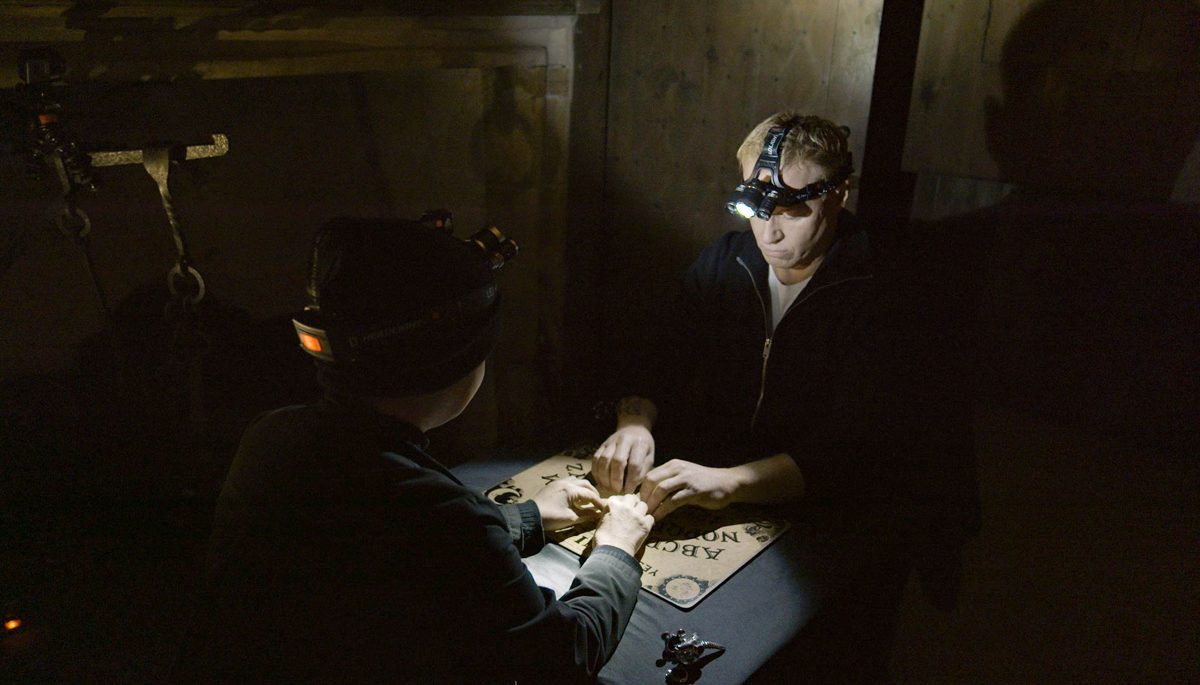 Photo: © Discovery+
After night fell, Gail and Chris began their nightlong investigation in the Tolbooth, where Chris became aware of several spirits and captured an interesting EVP. An EVP, or Electronic Voice Phenomenon, is believed to be spirit voices captured on a digital audio recording device.
As Chris talked about his intentions to communicate with the spirits a REM-Pod started beeping. A REM-Pod is a device that radiates its own electrostatic field, if anything conductive enters and disturbs this field the it beeps and lights up. Chris said, "it's rare to get such a strong response from a REM-Pod. I think it's a sign, they're asking for help."
Gail then took Chris and Ryan to George Bruce's former bedroom where she'd been unnerved earlier in the day. Gail once again became overwhelmed and emotional. A tearful Gail told Chris, "I feel like there's pressure on my chest." Moments later she felt like she was being touched again, this time on her neck. The incident was followed by what the team described as a running sound.
Ryan used is trusty Panasonic RR-DR60 audio recorder to try to find out who had caused the footsteps. They asked any spirits present if they were a woman or child. A sound was heard in the recording that they determined was a voice answering them with the response "woman". Using this same method they were able to determine that the female spirit was running from the more malevolent male spirit that women are scared of. They also believe they made contact with George Bruce in this room, meaning this malevolent spirit could be that of George.
Later in the night, Chris and Gail conducted a Ouija board session in an attempt to contact the spirit of George and give him the chance to seek forgiveness, something he rejected. Gail says "without forgiveness, surely he will continue to haunt the palace."
Chris summed up the investigation by saying, "not only is it one of the most haunted places, regarding a village, that I've ever been to, but the spirits here, many of them do want to seek forgiveness but the problem is, not every soul here will allow that."
'Spooked Scotland' continues next Friday at 9pm on Really and is available to stream on demand on Discovery+. Really is available on Sky 142, Virgin 128, BT 17, Freeview 17, Freesat 160.