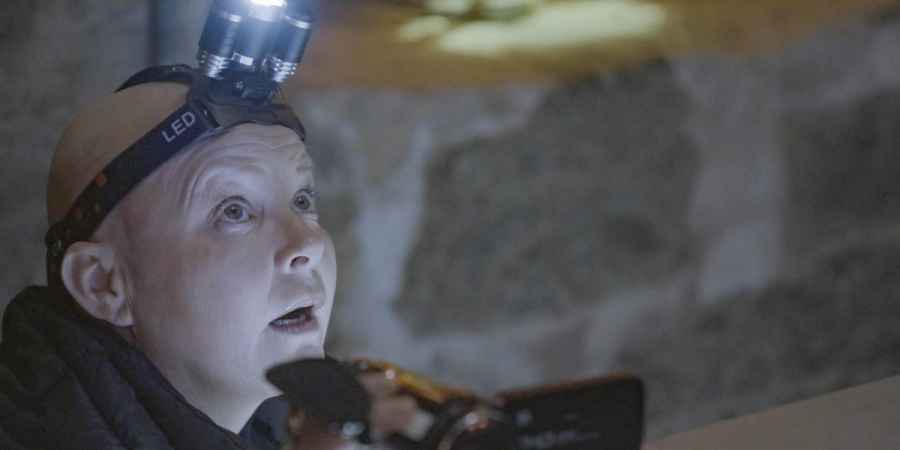 Photo: © Discovery+
'Spooked Scotland' continues on the Really channel and this week Gail Porter is terrified when she is seemingly tormented by the spirits of a castle in the Highlands. Along with her team of experts, the Scottish television presenter ventures into one of the most dramatic landscapes in Scotland, the legendary Glencoe, to investigate the site of a notorious massacre.
The team's investigation is focussed around Barcaldine Castle, which is said to be plagued by the Campbell Curse. The castle is now a hotel, but 300 years ago it was the scene of a brutal betrayal, which set the stage for the treacherous massacre of Glencoe, where Clan Campbell murdered over thirty MacDonalds in cold blood as they slept. Gail explains, "the Campbells turned on their hosts, the MacDonalds in the middle of the night, killing 38 of them." She adds, "this is where the curse of the Campbells comes from."
Psychic medium, Chris Fleming is missing from this episode, but Gail has the rest of her usual team with her. Technical specialist Ryan O'Neill, and parapsychologist Evelyn Hollow. They're also joined for this episode by an expert on Highland hauntings, medium Ryan "RG" Griffiths, who Gail tells us has spent a lifetime studying the fallout of centuries-old clan warfare. 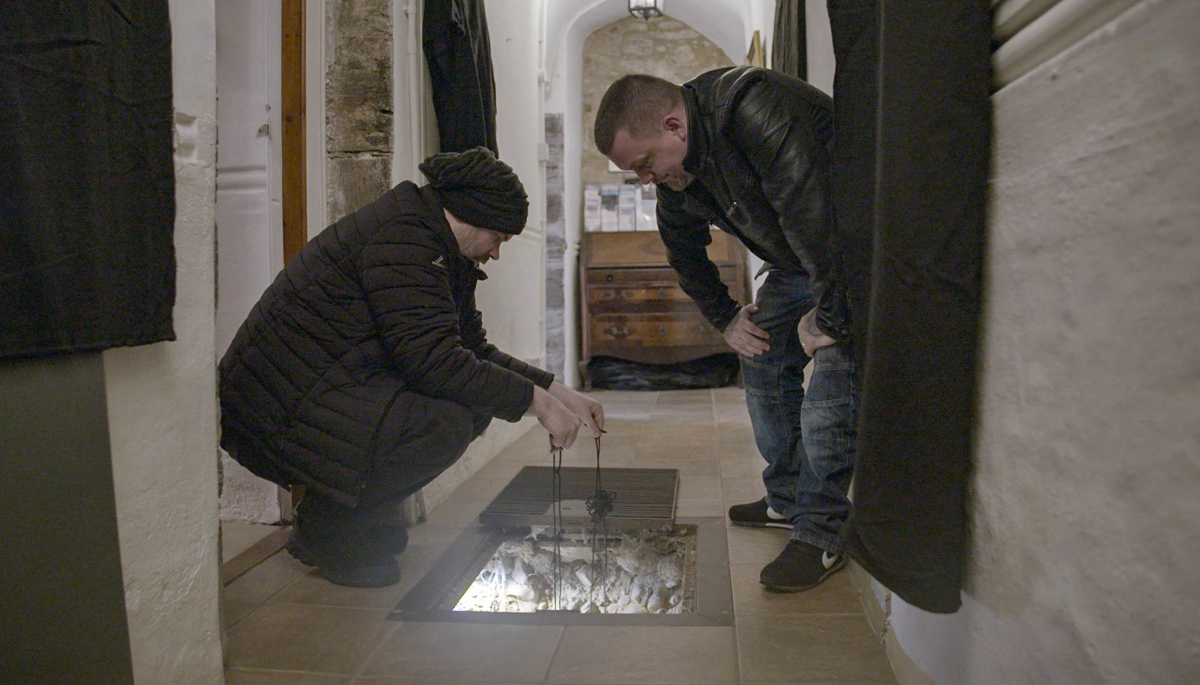 Photo: © Discovery+
Guest medium, RG, gets the investigation started as he and Ryan head out to conduct a psychic sweep. Stood outside the castle, straight away he says, "I can feel the energy just off the place being right beside it now." He added, "they're waiting for us to go inside, without a doubt. What happens when we go in, well, we'll just have to wait and see."
Once inside, they head to the Barcaldine bedroom, where guests have reported being held down on the bed at night. RG said, "the energy in here, you can feel it already, and it does feel like it's putting intense pressure on my head. In fact, more so than that, I feel like it's pushing down on my shoulders now." RG felt there was an individual spirit in this room.
Later, on the top floor in the Kinloss Room, RG picked up on a more aggressive atmosphere. He said that he felt Ryan should watch himself as he wasn't welcome in the castle. Next in the Caithness room, which is said to be the most haunted in the castle, RG felt a restless energy surging through the room. He said, "I'd be very surprised if we didn't have things being moved in here."
In the castle's basement they lower a night vision camera into the infamous Bottle Dungeon, named due to its shape, open only at the top.
Later while conducting a full walk-around the castle with Evelyn, Ryan is back at the grill leading down to the bottle dungeon. He's armed with a TriField meter, which measures electromagnetic field strength. He tells us, "there's a thought that high levels can cause the brain to produce hallucinations." The device spiked when placed at the opening of the dungeon, this means the team should be very wary of experiences here as it may be an electromagnetically-induced hallucination. 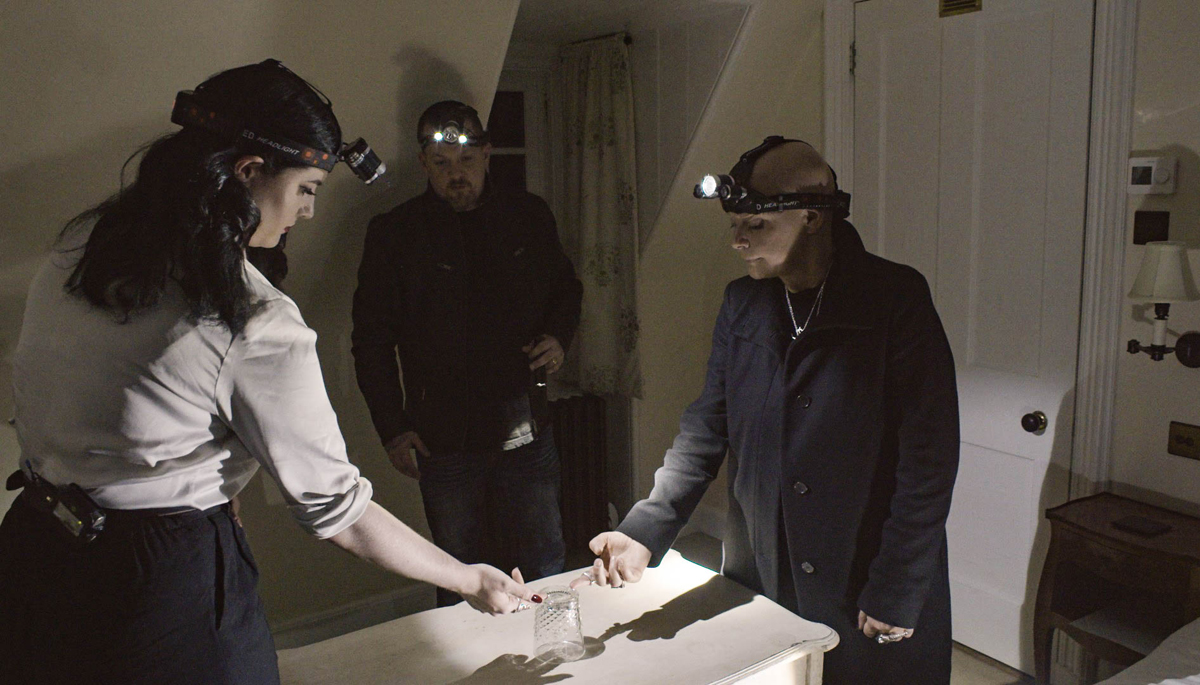 Photo: © Discovery+
After speaking to some local witnesses and investigating the site of the massacre in the glen itself, the team got stuck into their full night vigil at the castle. Evelyn and RG start in the Barcaldine bedroom where straight away they hear an odd rattling noise that they couldn't explain coming from the back of the bathroom. Seconds later the unexplained sound occurs again.
A little while later a towel seemed to have fallen off of the side of the bath. Evelyn was sure no one was near the towel at the time it moved.
Meanwhile, Gail and Ryan headed to the Caithness room, where a REM-Pod triggers as soon as they walk into the room. A REM-Pod radiates its own electrostatic field and if anything conductive enters this field the device alerts the investigators by emitting a sound and flashing lights.
Gail asks, "do you want us to go away?" and the REM-Pod flashes again. Gail says again, "do you want me to go?" and once again it flashed. It's not clear if this means yes or no, and the following question added to the confusion when Gail asks "do you want to speak to me?" and the REM-Pod beeps again. A beep can't mean 'yes' it wants Gail to leave and 'yes' it wants to talk to her, but the direct responses does seem to show some kind of communication.
Ryan then asks about the Campbells, and the device lights up, but again it's hard to tell for sure what this flashing means, but the interactions seem to terrify Gail. Later a green light was taken to mean that Gail should go down into the dungeon, but when she asked if she'd be safe there and the device lit up green again it was taken to mean she wouldn't be safe. Even Ryan seemed pretty confused by the end of this.
As Gail left the bedroom, she saw what she thought was a shadow of a large man in the hallway. She retreated back into the bedroom and radioed through to Evelyn and RG and asked them to join them for backup. The team finally left the room when RG started to feel uncomfortable there.
As the night went on, Gail felt that the energy in the castle is targeting her. She said, "I have to pluck up my courage and go out with Evelyn and investigate the lower floors." Meanwhile, Ryan and RG watch on from the base room via night vision cameras. They soon spot orbs on the screen, which RG thinks are "etheric manifestations captured on infrared but invisible to the naked eye."
After this the team head back up to the Caithness, which Gail calls "the room with the talking pod thing," where RG has one last technique he wants to try in order to make contact with the spirit in the room. They are trying glass divination, which works in a similar way to a Ouija board and involves placing an upturned glass on a table, each placing a finger on it and encouraging the spirits to move it.
Gail and Evelyn conduct the experiment with a finger lightly placed on the glass, but despite their best attempts to encourage the spirit to move the glass, it remained motionless. The investigation ends as the activity seems to drop off and the castle falls silent.
'Spooked Scotland' continues next Friday at 9pm on Really and is available to stream on demand on Discovery+. Really is available on Sky 142, Virgin 128, BT 17, Freeview 17, Freesat 160. 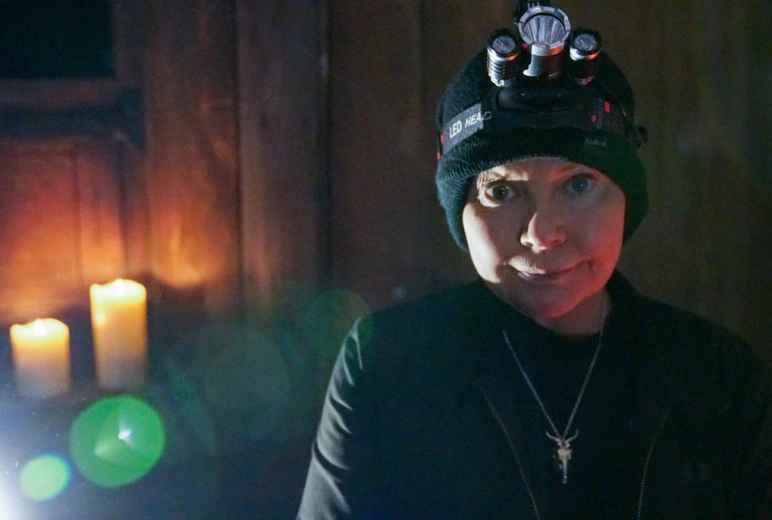