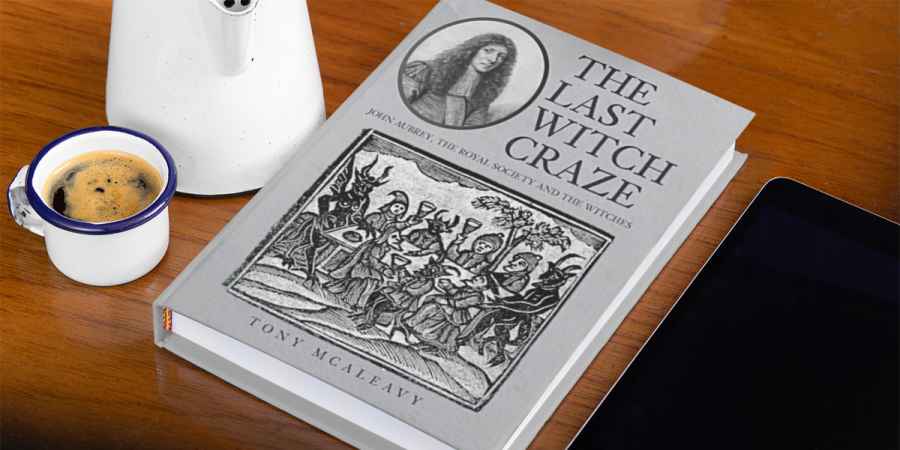 Tony McAleavy's new book, 'The Last Witch Craze', explores the influence that writer John Aubrey had over England's 17th century witch craze and reveals a shocking revelation about Aubrey's own black magic practices.
In a time when many educated people were beginning to have doubts about the spirit world and the power of witchcraft, Aubrey argued strongly that the paranormal was a reality. He was obsessed with the craft and believed that black magic could be explained in scientific terms, and he was taken seriously having previously written ground-breaking works of biography, history, archaeology and science.
Aubrey wrote about ways of countering witchcraft through horseshoe magic and suggested that gifted schoolboys should be taught to communicate with good spirits through the use of crystal balls. But by endorsing witchcraft beliefs, Aubrey, along with other leading English intellectuals, encouraged the persecution and execution of those suspected as witches.
Growing up in rural Wiltshire, Aubrey was surrounded by belief in the supernatural. In the mid-1640s a lethal witch hunt broke out in the area. At this time, Wiltshire was one of the last places in England where women were routinely executed for witchcraft, and as the book explores, the county was the setting for a spectacular outbreak of witchcraft hysteria.
Three cases in particular reinforced Aubrey's belief in the reality of the paranormal. The execution of Anne Bodenham known as the Witch of Salisbury in 1653, the demonic poltergeist in Tidworth in 1661, and the witches of Malmesbury 1643-72.
Later, as he moved in the elite world of Oxford University and London high society, Aubrey's belief in angels, demons and witches was confirmed.
At this point in his life he was spending considerable time in the company of his cultured, aristocratic cousin, Sir John Danvers. The book reveals how Danvers played a sinister role in the trial and execution in 1652 of Joan Peterson, the so-called Witch of Wapping. Aubrey had no apparent qualms about the death of Joan and no doubts about the authenticity of witchcraft.
Aubrey was heavily involved in the establishment of the Royal Society, an organisation dedicated to the promotion of modern experimental science. Many other prominent members of the society supported his beliefs, particularly Robert Boyle, the celebrated scientist who is credited as being one of the founders of modern chemistry.
Together, they investigated cases of witchcraft in Wiltshire and Somerset and that concluded the witches deserved to die because they were, beyond doubt, guilty of satanism. They explained how they were able to harm others and perform their dark magic in ways that were consistent with the laws of nature.
Their strange ideas about the scientific basis of satanism were taken seriously by others and were influential not only in England and Scotland, but also in North America. There they had a direct influence on the continuing persecution of witches in Massachusetts and contributed to the witchcraft hysteria that swept through the town of Salem in 1692. The book investigates the way that these ideas contributed to the death of twenty people in the infamous Salem trials.
Throughout all of this, Aubrey had a dark secret. McAleavy reveals that publicly, Aubrey was a respectable figure and a leading member of the Royal Society. In private, he was a practicing wizard, guilty of a terrible double standard, who used black magic rituals to attempt to summon demons and try to harness their power.
'The Last Witch Craze' is a fascinating read for anyone with an interest in witchcraft in 17th century England. It is available from Amazon now and explores Aubrey's fixation with black magic and examines how dangerous a man he really was. Find out more at amberley-books.com.
Tags:
bookstopicalwitchcraft