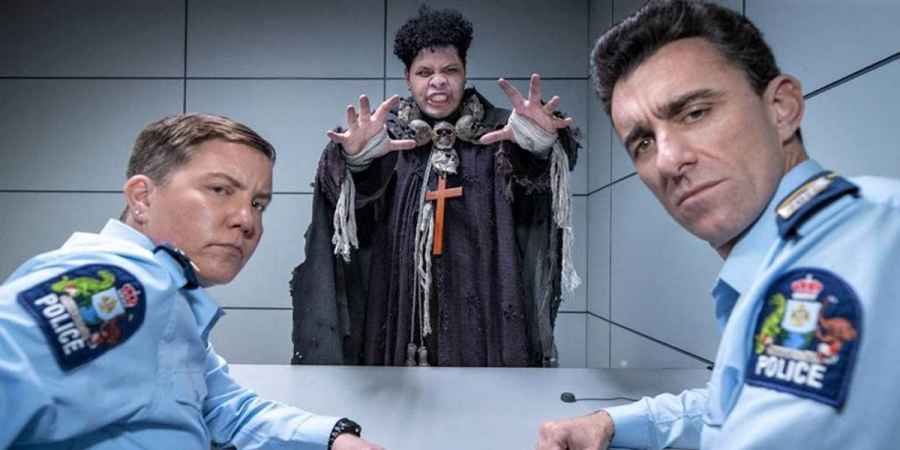 In the fourth season of the kiwi comedy series, 'Wellington Paranormal', we catch up with the adventures of officers Minogue and O'Leary as they tackle a half-bird, half-woman that's been stealing shiny objects from around Wellington, deal with a haunted leather jacket that makes whoever wears it cool, and attempt to get to the bottom of a series of mysterious curses while Officer Parker gets a new partner.
Test your knowledge of the comedy series with our 20 tricky trivia questions on series one of 'Wellington Paranormal' and let us know your score in the comments below...

1. Officer Minogue sacrificed his own personal possession to try to catch the Bird Woman, which of these did he offer to the cause?

2. What is the name of the budgie that Parker's brings into the station?

3. Where did the Birdwoman build her nest?

4. What is the name of the skipper who takes the officers over to Sales Island?

5. What was strange about the Elders on Sales Island?

7. Which of these was NOT a member of the community on Sales Island?

8. What colour was the jacket that makes whoever wears it cool that the officers confiscated from the school?

9. While wearing the cool jacket, what did office Minogue perform on the roof of the police station?

10. Under the influence of the cool jacket, offices Minogue and O'Leary broke into what kind of store?


11. Who was the owner of the cool jacket before he died in a dance battle?

12. What do the officers discover the police station is built on?

13. What do the officers use to try to contact the entities that are haunting the police station?

14. Which room do the officers repeatedly run into while trying to escape the ghosts of the police station?

15. Parker gets a new partner in season four, but what is his name?

16. At one point in the season officers Minogue and O'Leary apprehend a pale man walking from Wellington, but what is he carrying?

17. Officer O'Leary played a version of which game with Satan in an attempt to win back the stolen souls?

18. What was the name of the club night where Wellington residents were having their souls taken by the Devil?

19. What year did the officers travel back to after stepping through a time portal?

20. Which seemingly innocuous object caused the timeline to be drastically altered when Minogue and O'Leary gave one to Sergeant Maaka in the past?