A few weeks ago, 'This Morning' presenters Eamonn Holmes and Ruth Langsford were spooked by a Victorian-style doll. After being sold on eBay the creepy doll is back and this time Yvette Fielding is on hand to give her opinion on the toy.
It's been called "the world's most famous haunted doll", although personally I think I'd give Annabelle that title. She caused quite a stir last time she was on the show when the rocking chair she was perched in started moving on its own. 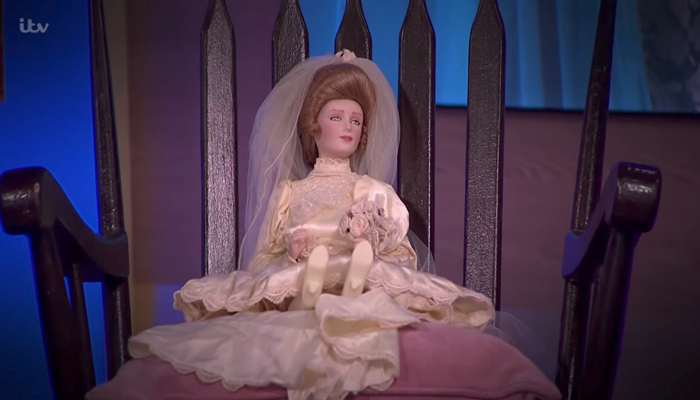 Photo: youtube.com
Paranormal researchers, Lee Steer won the doll in the online auction. Lee paid £866 for the eerie bridal doll and it seems it took her no time to get back to her old tricks. After several strange happenings, Lee has forced to hand her over to a psychic to investigate.
After the doll arrived in his house, Lee started experiencing odd things, such as a picture frame moving on his wall. He also claims his father was mysteriously scratched by the doll. He called in psychic Deborah Davies to take a look at the doll. Since taking it home, she has also experienced a host of spooky goings on, including jewellery going missing and the scratching of skin.
Deborah says she can feel the spirit of a little girl in the doll, she doesn't know if it's the owner or not but feels the girl was murdered. She could also picked up the spirit of the little girls mother. But most disturbingly, Deborah said she felt an evil in the doll that comes and goes. She believes this energy is left behind by the man who murdered the girl.
Deborah brought the doll back to 'This Morning' where the nation's favourite ghost hunter, Yvette Fielding was ready to give her opinion. It seems Yvette is far from convinced that the doll is "haunted". The 'Most Haunted' presenter said that she thinks this is a case of "psychometric". She thinks Deborah is "picking up on feelings of an object, the people that owned it," and that "it's not necessarily haunted."
Although Yvette wouldn't go as far as to say the doll was haunted, she was certainly interested in it. Yvette said she would like the opportunity to run experiments on it. She told the 'This Morning' host, "I'd like to film in constantly, live stream it. I'm prepared to sit with it for an hour every night on my own and see if anything happens."
Eamon asked the hardened ghost hunter if she was spooked by the doll, she said "not at all, I don't think that it is haunted. I think that, with all due respect, you're picking up on psychometry, which has been scientifically proven."
Yvette spoke exclusively to Express.co.uk about the doll's £866 price tag after her appearance on 'This Morning'. She told the paper, "I think anything where anyone is making money off an object and getting on TV and getting publicity then I'm very dubious. I think it could be a publicity stunt to make money."

The Doll's First Appearance On 'This Morning'