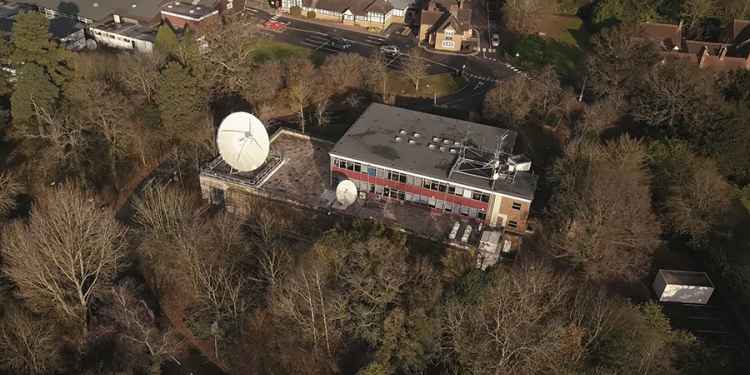 Situated not far from Evesham and hidden beneath a wooded hillside, a transmission tower is the only clue to motorists of its existence as they pass by on the busy A44 in Worcestershire, this is PAWN (Protected Area Wood Norton).

This site is active and in use by the BBC.

The BBC's Wartime Broadcasting Service first went in to operation during the Second World War. Staff and resources worked from a relocation site at Wood Norton near Evesham. The construction of a large bunker was completed in 1966, built housing four radio studios and accommodation for 100 staff, known within the organisation as "deferred facilities".
With the Cold War came a new threat, the threat of nuclear attack and the BBC revised its plans accordingly. It was decided that the broadcasting service could be used to provide the population with instructions, information, guidance, news and Central Government announcements.
It was also hoped that the service would give encouragement and relieve stress and strain, this was to have been achieved through pre-recorded entertainment programmes and records which would have made up 50 percent of the BBC's wartime programming. Until 1993, 100 days worth of programmes were lined up and ready to play if the worse happened, a mix of comedy, drama and religious programmes, as well as the Julie Andrews classic, The Sound of Music.
Wood Norton would provide a continuous national programme. BBC staff posted at Regional Government Headquarters around the UK could opt in to this service at any point when the regional commissioner did not require use of the system. In this way the maximum number of listeners would hear the vital life-saving information broadcasted in these transmissions. The BBC's regional staff were also prepared to provide programming should the region be cut off from the central national output.
Only a select few within the BBC knew of the existence of the PAWN bunker, those that were let in on the secret were first vetted by the Ministry Of Defence and were asked to sign the Official Secrets Act.
Today, Wood Norton Hall is still in use by the BBC who keep details of the site top secret, claiming the site is used as nothing more than a BBC training site, a weekend retreat for the organisation's engineers.
From above, the compound consists of a complex of modern buildings which are equipped with the latest in broadcast technology, within the complex there's also a large canteen, the rest of the site at Wood Norton is buried beneath the hill.
The nuclear blast proof bunker is built into the hillside, over 50 meters long and constantly on stand-by in case of an attack on the Beeb's Central London studios. As well as radio studios, the bunker also has dormitories and facilities to comfortably house the 100 staff underground for a sustained period of time.
The bunker has rarely been used, apart from as back-up studios while work was being carried out on the BBC's Broadcasting House in London and in 1999 when staff were relocated from London and generators were put on stand-by with the threat of the Millennium Bug looming.

Very little is known about the current state of the bunker. In fact it is still one of the best kept secrets in the underground world, this is because the site is still active and classified to this day.
Security at the site is lowkey and fairly minimal. At the end of 2019 'bunker buster' Matthew Williams ventured on to the site in search of the entrance to the bunker. Matthew was able to park in the carpark of the neighbouring hotel, walk through the woods and simply stroll into the BBC's Wood Norton site from behind - no gates, no security.
Of course it didn't take long for the Beeb's security to arrive when he was spotted on camera wandering around between outbuildings containing services like heating, ventilation, and air conditioning. The buildings also had less-than-subtle satellite dishes on their roofs.
Although the BBC took a dim view of Matthew's exploration of their land, there was nothing they could do but ask him to leave. They did also request that he deleted the video he'd taken on site, but they didn't have any legal basis to force this request, hence the video ended up on his YouTube channel, Secret Vault, as well as drone footage showing the entrance to the bunker - you can watch the video above.
Despite rumours that the BBC's operations at Wood Norton had been wound down, the active and touchy security, running ventilation equipment, and the broadcast dish indicate that this site definitely still houses something more than just an engineers' training retreat.
Add A Comment
Tags:
undergroundworcestershireurbex