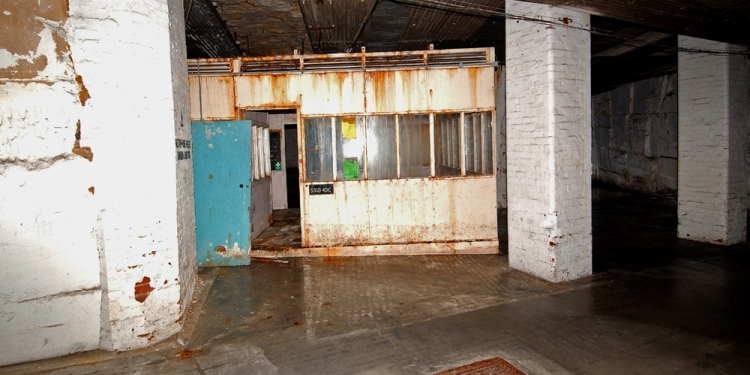 A large stone quarry which was converted by the air ministry during WWII, the quarry housed the world's largest underground factory. Later it became Royal Navy stores and part of the factory was converted in the government's emergency relocation site in the event of nuclear attack. Spring Quarry joins the south edge Tunnel Quarry, it also joins the smaller abandoned Sands Quarry.

Parts of the quarry are used by a private company, the rest is secured by the Ministry Of Defence as it borders some of their active underground areas.

Located South-East of Bath, Spring Quarry forms part of the area beneath JSU Corsham (formerly known as RAF Rudloe).
The Ministry of Aircraft production first acquired Spring Quarry in 1940 from the Bath and Portland Stone Company who had been extracting building stone from the quarry for the last century.
In 1941 worked started in the old stone quarry converting it in to what was at the time the largest underground factory in the world.
The Beaverbrook underground aircraft factory within Spring Quarry housed the Bristol Aerospace Company and a BSA's gun barrel factory . The vast caverns had some 2,250,000ftsq of space, divided into many smaller chambers for different companies operating underground.
A year later conversion work continued underground but by this stage the threat from German bombing had decreased so parts of the quarry were never used, the main area being the Dowty section in the North-West of the quarry which was intended for Dowty Engineering, the conversion of the Dowty section was never completed.
The factory finally closed and the companies moved out in 1945 after the Second World War had finished leaving a bill of over £20,000,000 after having very little use.
Spring Quarry was then passed over to the Ministry of Supplies who used most of the site for Admiralty stores until the early 90s.
Spring Quarry joins to other quarries, the MOD's Tunnel Quarry and an old stone quarry called Sands Quarry which was used as an emergency exit during the factories opporational days.
In the build up to Cold War the British government began a programme to strengthen and secure their facilities within Spring Quarry to try to ensure the safety of the government. The northern area of Spring Quarry was chosen as the wartime seat of power in case of nuclear war, this area became known as the Hawthorn Central Government War Headquarters. Hawthorn was later known by such names as 'Burlington' and more recently 'Site 3', for more details on this area of Spring Quarry please click here.
The future of Spring Quarry is at the moment uncertain, it is still secured and owned by MOD, most of the underground area is now abandoned. One area in the western side of the quarry is still in use today, it now forms part of Corsham Media Park's underground studio complex.