After a ghost hunt in a disused railway tunnel, a team of paranormal investigators encounter a man with a torch who moments later vanished in front of their eyes. 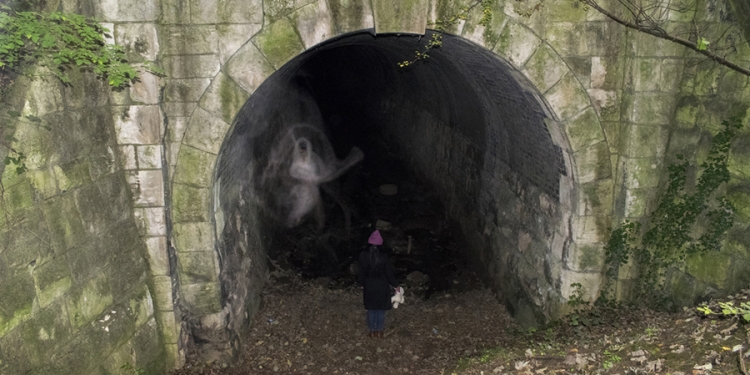 Photo: © iStock
You've probably heard of ghost stories that involve a family visiting a historic castle and upon leaving, the youngest member of the family says to their parents "I liked the man dressed as an old soldier," only for the parents to look concerned and tell the child, "there wasn't a man dressed up."
It's not uncommon for people to spot dark shadowy figures and unexplained movement out of the corner of their eye, but seeing a full apparition is very rare. However when it does happen, the majority of witnesses of credible sightings tend to report a solid figure that was indistinguishable from a living person.
There's also countless tales of unassuming members of the public walking up to a solid-looking human, only to find they disappear right in front of their eyes.
This leaves us with the question... would you know if you came face to face with a ghost?
Well that's what a bunch of ghost hunters have been left wondering after a paranormal investigation in South Yorkshire where they witnessed a man identifying himself as a police officer, but moments later he seemed to disappear without a trace.
Charlene, Chrissie and Aimee from the Paranormal Hauntings team witnessed the incident that left them shaken during an investigation at a disused railway tunnel on the outskirts of Doncaster. Cadeby Tunnel is said to be haunted by the ghost of a young girl known as the Mexborough Ragger, who was allegedly killed by a train in the tunnel.
The team were broadcasting their investigation live on Facebook while on the hunt for the ghost of the girl, but near the end of their live stream they made contact with what they believed to be the spirit of a male using their ghost hunting equipment.
After more than two hours at the location the team headed back to their cars that were parked off of nearby Garden Lane. They wrapped up their investigation and ended their live stream, but moments later they were unexpectedly confronted by the man, who left them wondering what they had just seen.
After the incident, the girls jumped in their cars and drove somewhere safe and resumed their live stream to tell their audience what had just happened. They all look shaken by the series of events, especially Charlene who literally looked like she'd just seen a ghost. 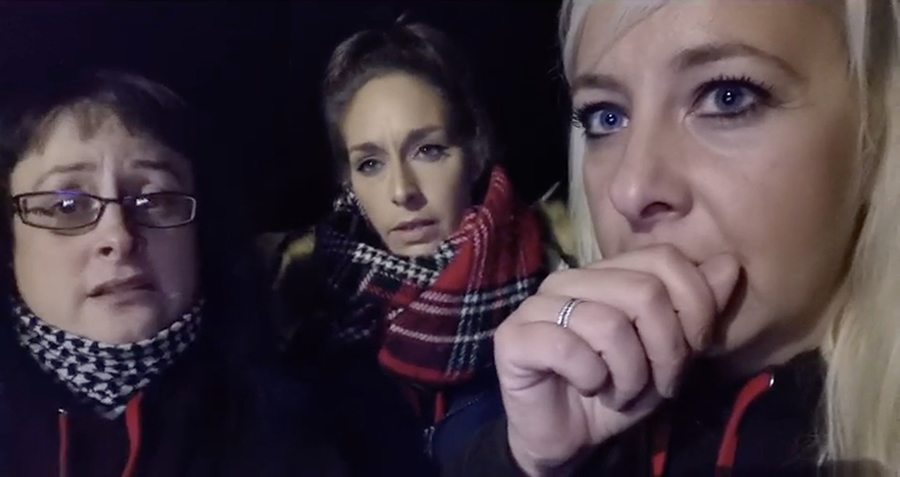 Photo: © Paranormal Hauntings
Chrissie told viewers that she was "flabbergasted, shocked, and freaked out." She explained, "we finished the live, we started to do a clearing." Then, Charlene said, "I heard footsteps first." Apparently this isn't uncommon during one of their cleansing rituals, so they didn't think much of it.
Then, they were suddenly blinded by bright torch light coming from the direction of their cars. The team turned to face the source of the light, they were unable to see who was holding the torch because it was shining directly at them, but Charlene said she was able to make out a bald head.
Then they heard a deep voice say "South Yorkshire police." Chrissie challenged this and said "go on then, show us your ID," but then to her surprise the man and the light disappeared. She said, "he just vanished. His light disappeared. There was no footsteps away."
Charlene, who was close to tears, added, "he just vanished and we don't know where he went." Chrissie said, "we went to the cars to make sure the cars were safe. We felt like maybe he was hiding around the cars. He wasn't." The girls even checked under the cars with their torches.
So where did this mysterious man go? Well, that's the confusing part. The girls' cars were parked on a lane with just one way in. On one side of the lane was a steep drop, and there was thick brambles on the other side.
Could he have made a dash for the brambles? Chrissie doesn't think so, "if he'd hidden in a bush we'd have heard him." Aimee pointed out how difficult that would be in the dark, "there's no light from houses or streetlights. He would have needed to use his torch to get away."
Chrissie said, "for him to have disappeared that quickly, he's got to have run. There was no footsteps, there was no running noise." He could have driven though, right? Aimee doesn't think so, she said "there were no cars." After the incident the team drove along the road to see if any cars were parked up. There wasn't and no headlights were seen throughout the incident.
The location is fairly remote, so it's unlikely anyone would just happen to be walking by at close to midnight. The nearest home is almost a mile up the lane or quarter of a mile away if you don't mind swimming across the River Don.
Once safely huddled under the light of a streetlamp in a nearby town, speaking on camera Charlene said "we cannot be 100% certain that it wasn't a real person," but added, "I don't know if I've just seen my first ghost." Aimee, who admitted she was more confused than anything, agreed with Charlene's conclusion that "we've either encountered some weird strange person or seen a ghost."
Whoever or whatever they encountered clearly wasn't a policeman, so who was it? Well, there are reports that the same thing has happened to others in the area. Although this is known locally, nothing is documented. Charlene is still trying to investigate these claims further and track down the witness statements.
There is one similar documented story, that of the ghost of a lantern boy based around the old coal mines that once operated in the area. At one time children were a part of the mines' workforce and were responsible for opening and closing the wooden doors underground to let the mine carts through.
The ghost of one such child is said to haunt the isolated areas near Cadeby Tunnel. He's described as being dressed in tattered clothing and is seen carrying a bright light. Similar, but a lantern wouldn't produce the blinding light the girls saw, so we can probably rule out the "Lantern Boy", unless he's upgraded is 19th century lantern for a modern flashlight.
There's also a story of a murder which took place near Conisbrough Viaduct, which is situated just a two-minute walk away from the tunnel, but as the victim was female that doesn't seem to match the incident the investigators experienced. Unless of course the figure they encountered was the ghost of the South Yorkshire police officer who in life was the first to arrive at the scene of the crime.
For now exactly what the Paranormal Hauntings team saw remains a mystery, but Charlene said she's still searching for answers and that they're planning on going back to the same spot on the lane to see if there's any conceivable way that someone could have quickly and quietly escaped in the darkness.
You can watch back the team's full investigation of Cadeby Tunnel below...

Have you experienced anything weird near Caedby Tunnel?