'Ghost Stories For Christmas' Returns From The Grave 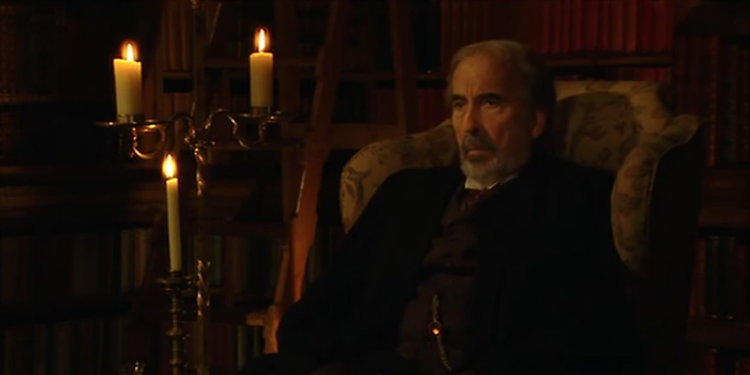 It may give you the winter chills to hear that Ghost Stories at Christmas is back on our tellies this festive season. The strand began back in 1971 with the M.R. James adaptation 'The Stalls of Barchester' and ran regularly until 'The Ice House' in 1978. It's an absolute must-see if you are a fan of the dubious tradition of scaring yourself silly on Christmas Eve. But be warned, if you're easily disturbed it might be best to say 'ho ho no' and change the channel immediately after the Top of the Pops 1973 Christmas Special.
Montague Rhodes James (1862-1936) was one of England's finest writers of short ghost stories, and it is a delight to see one of England's finest genre actors Christopher Lee, portraying the author in two episodes from 'Christopher Lee's Ghost Stories for Christmas' as part of Aunty Beeb's spectral line-up. I remember staying up, snowed in and sat by the fireside, to watch these the first time they aired. They haven't lost any of their impact - 'A Warning to the Curious' indeed.
Now included in the must-own 'Ghost Stories at Christmas' box set (although originally broadcast in the decidedly un-Festive May, 1968) one of the the most infamous M.R. James adaptations is 'Oh Whistle and I'll Come to you My Lad', with its breathless refrain of "Oh no! Oh no!" performed so memorably by Michael Hordern. This disturbing story of an academic meeting unspeakable, unnamable terror via a mysterious artefact offers a monochromatic glimpse into the abyss. It's atmosphere defines what a Christmas ghost story should be - whimsical, to the point of out-and-out campery, but with enough genuine chills to send Santa scurrying back up your chimney.
'Oh Whistle…' was updated for a HD-viewing audience in 2010, with John Hurt in the lead role as an estranged retiree revisiting the seaside hotel of his honeymoon from happier years. Trust me, if you watch this one, you'll never look at hotel room pillows in quite the same way again. Perhaps less campy than its predecessor (and also far less subtle) this version of James's story makes a perfect double bill with the 60s version. Try it, but don't blame me if you have to sleep with the lights on, and the sheets firmly tucked under the mattress.
The series deviated from M.R. James's stories in 1976, with an outstanding adaptation of Charles Dickens' immortal tale 'The Signalman', also screening on Christmas Eve. Superb character actor Denholm Elliott gives a spellbinding performance as the titular signalman who is haunted by an imposing hooded figure, which seems hellbent on scaring him to death - until the full meaning of the apparition is revealed. When you've watched this one, reach for a copy of the original story and marvel at how effortlessly Dickens ratchets up the impending sense of dread. Two original tales followed after 'The Signalman' - the stone circle spooker 'Stigma' and the 70s gothic of 'The Ice House' - but despite their overall effect, these stories failed to sustain any further entries in the series until a brief revival with 'A View From The Hill' (2005) and 'Number 13' (2006).
Ghost stories was once again revived (briefly) for Mark Gatiss's adaptation of M.R. James's 'The Tractate Middoth' in 2013 and you can see this again as part of BBC4's eerie extravaganza. Well worth catching - of all the adaptations released on shiny disc over the years, this is the one that is conspicuous by its absence. First adapted of US television in the 1950s (and featuring a youthful Leslie Nielsen) and by ITV in the 60s as part of the network's 'Mystery and Imagination' series, the story centres on a mysterious tome in a dusty old library. To say any more would be to stray into spoiler territory, but suffice it to say - avoid this story if you dislike doom-laden familial curses, and creepy crawlies!
And Gatiss himself can be seen on Christmas Eve in a welcome re-run of the hour long documentary 'M.R. James - Ghost Writer', which charts the progress of the author and his influences from his Suffolk home to Eton, Cambridge and beyond into France. It is fascinating viewing and may help you to rid yourself of the night terrors… Well, until the Top of the Pops 1973 Christmas Special airs again, that is.
» BBC Four's full Ghost Stories on Christmas Eve schedule

Frazer Lee's debut novel 'The Lamplighters' was a Bram Stoker Award finalist for 'Best First Novel' and a Book Pipeline finalist. His other published works include the Amazon No. 1 horror/thriller 'Panic Button: The Official Movie Novelization', novels 'The Jack in the Green' and 'The Skintaker', and the 'Daniel Gates Adventures' series of novellas.
His screenwriting credits include the acclaimed horror/thriller feature film 'Panic Button', and award-winning short films 'Simone' and 'The Stay'. His film and television directing credits include multiple award-winning films 'On Edge' and 'Red Lines' (starring Doug "Pinhead" from Hellraiser Bradley) and the promo campaign for Discovery Channel's 'True Horror With Anthony Head'. His script doctor and story consultant engagements include commissions from The Asylum, Mediente Films International, Movie Mogul, and others.
Frazer is Head of Creative Writing at Brunel University London and is an active member of the Horror Writers Association and International Thriller Writers. His guest speaking engagements have included StokerCon, World Horror Con, London Screenwriters Festival, and the Guerilla Filmmakers Masterclass. He lives with his family in Buckinghamshire, England just across the cemetery from the actual Hammer House of Horror.
Official website: frazerlee.com
Twitter: @frazer_lee
Facebook: /AuthorFrazerLee
Goodreads: Frazer_Lee
Amazon: Author page
Tags:
paranormalchristmastelevisiontopical