This is the second part of a two-part investigation of the Moat House. You can read about the first half of the investigation here, or read more reviews, and episode guides in the Most Haunted section. 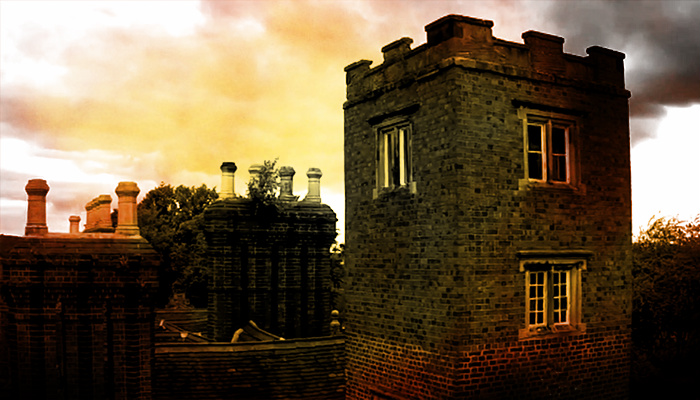 This week's episode is the conclusion of Yvette Fielding's investigation of a building, which started its life as a private house, before becoming an asylum. Today it is a thriving bar and restaurant in the heart of Tamworth.
With so much history, it's no surprise that the building has such a reputation for being haunted. In the restaurant area, guests have reported hearing their name whispered in their ear, and the ghost of an elderly man smoking a cigar has been seen walking around.
The upper floor of the building is empty and many of the rooms are in a state of disrepair. It's said that this floor is haunted by a dishevelled old woman who is believed to be a former inmate of the asylum.
The house has a distinctive embattled tower that is haunted by the ghost of a little girl, she's said to have died in a fire after being locked in the tower by her father. 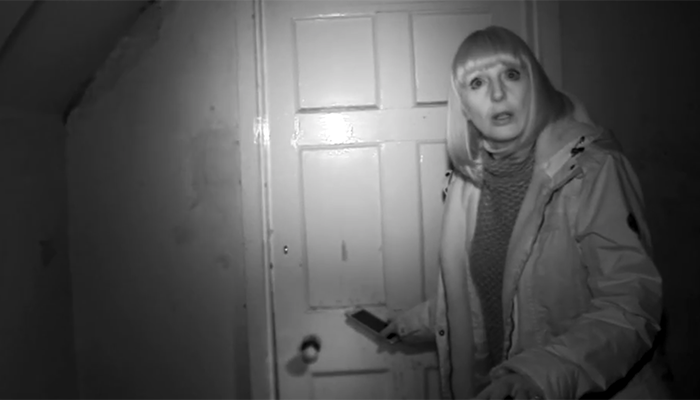 The action in the first half of the investigation started even before the lights were turned out. While filming in the restaurant, a chair fell over with a crash and almost hit the show's producer Louise Jones as she walked past. The team unanimously agreed that Lou wasn't the cause. They stood the chair back up and moments later it fell again, this time there was no one near it at all, not even passing.
On the upper floor the team heard a crash and spun around to find that a dinner plate had been seemingly thrown behind the camera men. With the lights out the investigation began, but Yvette's dog Watson refused to stay on this floor.
The team experienced knocks, bangs and footsteps in this area and, towards the end of the episode, another plate was thrown, which coincided with an EVP recording. The eerie voice which was captured on a laptop sounded like it was saying "get out."
Karl Beattie tackled the embattled tower alone, where he repeatedly heard giggles, wheezy laughter, and other unexplained sounds. 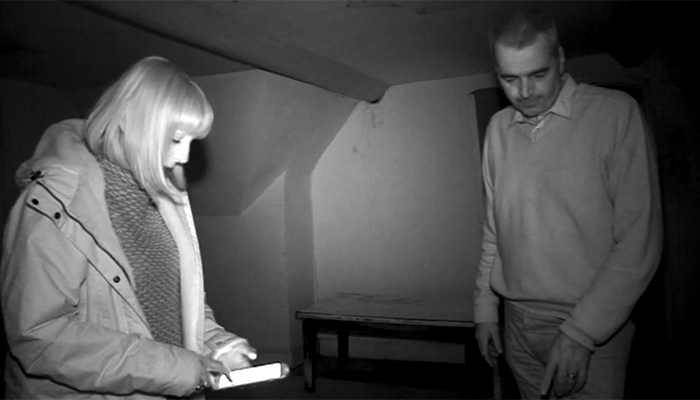 The episode picked up where we left off, with Yvette, Karl and Gregg Smith on the upper floor where they were trying to make contact with the spirits of the house.
Yvette was asking the spirits to respond to her questions with one knock for no and two for yes. Using this method she managed to deduce that they were in the presence of one of the former patients who would have spent time in the house when it was an asylum.
The vigil suddenly ended when Karl saw a shadow at the end of the corridor and ran off to investigate. Reaching the end of the corridor, it was clear there was no one upstairs with them, but the odd occurrences continued as they experienced several very loud bangs from beneath their feet.
After moving back into one of the rooms, they then heard the clear sound of footsteps which sounded like they came from the end of the corridor and into the room with them. Yvette said it was like "something walked up to us." Gregg added his thoughts, "it followed us into the room."
The team speculated that they were being toyed with, being drawn from one place to the other. Yvette shouted out, "you're loving this aren't you, are you laughing?" A really eerie child's laugh could be heard in response.
For the rest of their time on the upper floor they experienced a huge amount of unexplained knocks and bangs. 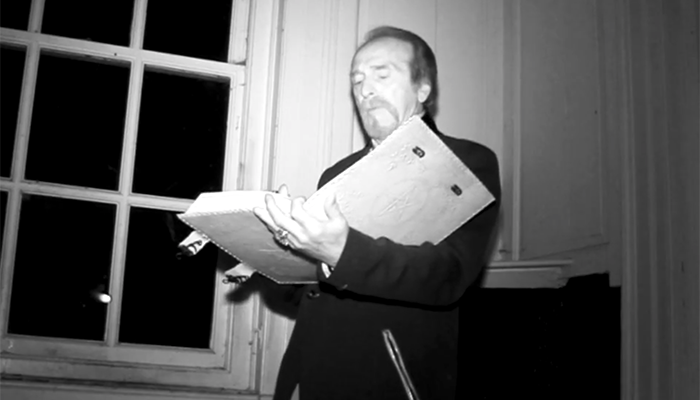 Glen Hunt and Darren Hutchinson were conducting a vigil in the restaurant area where Stuart Torevell caught the old Most Haunted favourite on camera, an orb. Meanwhile, Fred Batt was alone performing an incantation.
With his big book of demonology open in front of him, he read aloud for the spirits of the Moat House to hear, "spirits of the witches who worked this place many years ago, I stir thee from thy sleep, and command thee to come forward from the darkness of the other world." 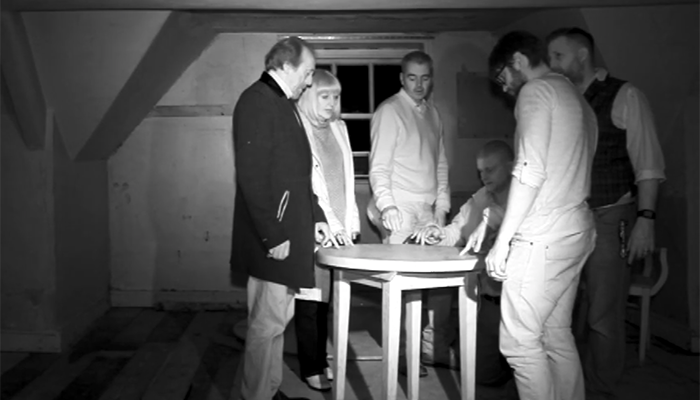 The whole team regroup upstairs to conduct a séance including a table tipping exercise. Although the spirits were quiet, something did seem to be moving the table to music. Knowing one of the spirits which is said to haunt the building is a child, Yvette was singing "twinkle twinkle little star."
Straight after this Yvette heard a very sinister growl, seconds later Fred thought he saw something at the end of the corridor. Karl speculated that again the spirits were giving them the run around and trying to split them up... and that's exactly what they ended up doing. 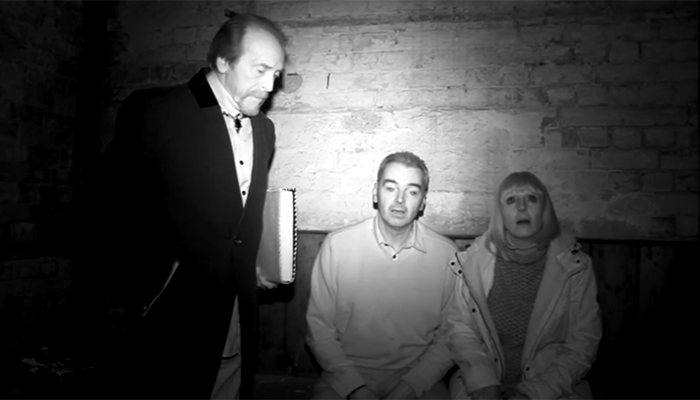 Yvette, Karl, Fred and Gregg went to the tower where they tried to make contact with the little girl who was said to have died in a fire there. As they climbed the narrow stairs there was a crash which seemed to be a smashed wine glass.
The team were now on a floor of the tower that they hadn't previously been to, and there was a surprise waiting for them. In the middle of the wooden floor was a large bucket with a few centimetres of water in the bottom, and face down in the bucket was a creepy doll. 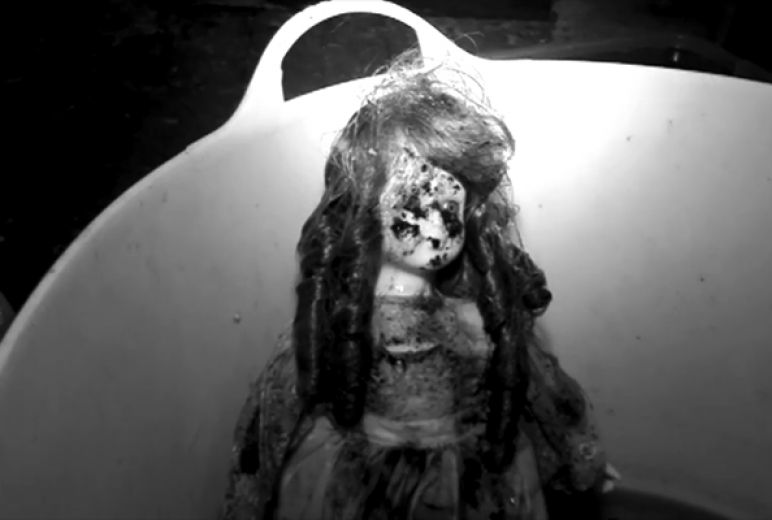 As Karl tentatively reached in and turned her over a strange child-like cry could clearly be heard. Leaning in to examine it, Fred said "it stinks doesn't it, it must have been here years." He added, "it looks like there was some kind of ritual carried out up here, and there was a girl killed up here."
He went as far as saying it was "some kind of sacrifice thing," based on the presence of empty beer bottles on the floor.
As they left the room there was panic as Karl was suddenly hit on the head by a wine glass, despite the fact there was no wine glass to be seen anywhere in the room before the incident.
Gregg said, "I felt what was like a breeze or a draught come up the stairs, and then something went over the top of my head..." but his sentence was cut short when something else spontaneously smashed, this time it was a plate, which had broken on the top of the stairs.
Things were a little quieter for Glen, Stuart and Darren, who remained on the upper floor of the building, but they did have some very clear and distinctive knocks in response to their questions. 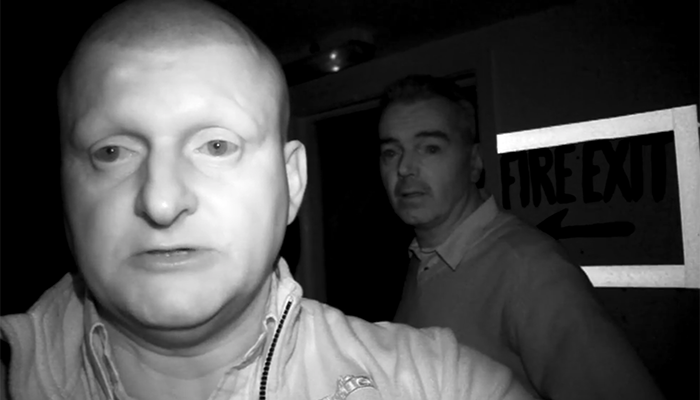 After a short break the team re-grouped and Yvette went back to the tower with Darren and Glen, where another plate was mysteriously thrown.
Meanwhile, Karl and Stuart headed to the derelict upper floor where they straight away broke a promise they'd previously made to Yvette and started calling out to the spirits asking them to "do their worst" and hurt them.
Bizarrely they started hearing things smashing, being thrown and doors closing, even though there was no physical signs of these things actually occurring. It was like an audio-only example of stone tape theory. This is when events from the past are stored in the building and are mysteriously played back.
With that, the 22nd series of Most Haunted came to an end.
For reviews of all of the new episodes, plus highlights and evidence from the shows, and to find out when Most Haunted is on next, visit the Most Haunted episode guide.
»Most Haunted At The Moat House - Part One