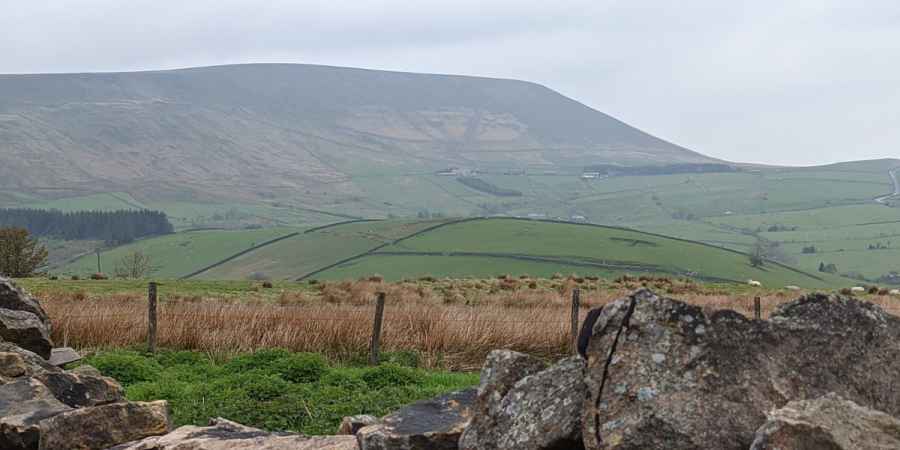 Pendle Hill has become a legendary supernatural location due to its connections to the infamous witch trials that took places there. It's a popular location for paranormal investigators hoping to encounter the lingering energy of the witches who were persecuted there.
Although there are several allegedly haunted buildings around Pendle Hill, none are open to the public and are all private dwellings. The privacy of the present day inhabitants should be respected. However, there are signs of the area's dark past scattered around the villages in the shadow of the hill.
We've planned out your perfect day trip to Pendle Hill taking in the history of witchcraft in Newchurch-in-Pendle and Barley, a great place to grab a bite to eat, and for the brave, a walk up the hill itself. 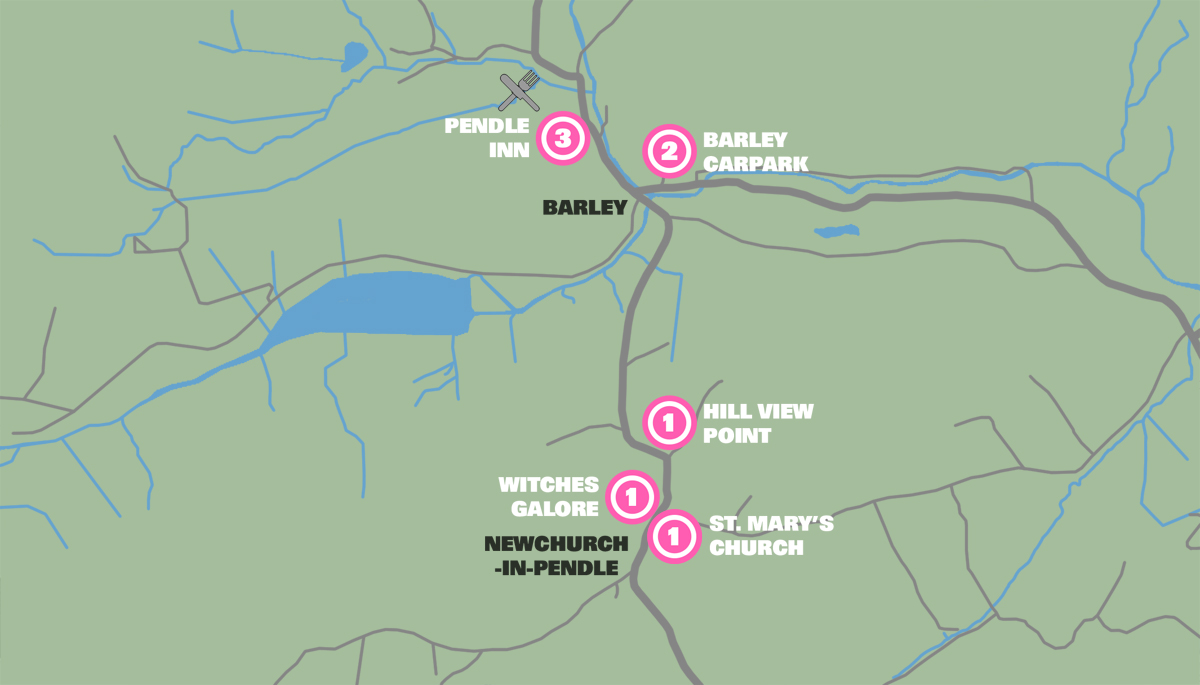 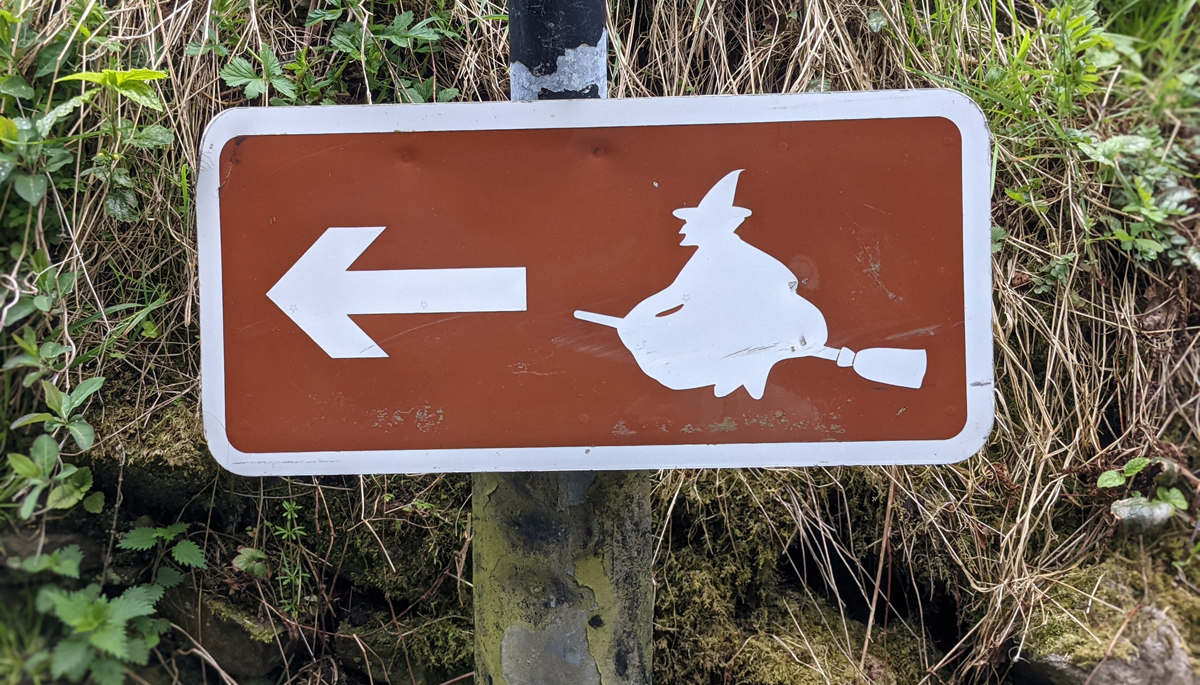 Before you head off on your day exploring rural Lancashire, you should know a little about Pendle Hill's grim past. The whole area is famous for its history of witchcraft and the area's witch trials are some of the most famous and best recorded in British history.
The story of suffering, execution and witchcraft at Pendle Hill dates back to 1612 and the reign of King James I. At this time England was living in fear of witchcraft and evil spirits, and those found guilty of witchcraft were executed.
Under the order of the king, local magistrates conducted witch hunts in Lancashire. Following a spate of murders in the area, 12 locals living in the villages surrounding Pendle Hill were amongst the accused in what became one of the most famous witch trials in English history.
The accused were all imprisoned at Lancaster Castle where one of them, Isobel Southerns known as Demdike, died awaiting trial in prison. The other 11, nine women and two men, were tried for witchcraft. Ten were found guilty and publicly hanged.
400 years later, many now believe that the areas surrounding Pendle Hill are still haunted by the spirits of the accused and their victims. Over the years the hill and the surrounding homes have been investigated by prominent paranormal investigators.
Most recently Danny Moss lead his team there in 'The Haunted Hunts', but perhaps the most famous of these investigations was Yvette Fielding's in the long-running ghost hunting show, 'Most Haunted'.
Yvette took her team to the home of the Pendle witches for a live show which aired over Halloween 2004. During the broadcast, which was spread over three nights, the team held vigils at Clitheroe Castle, Church Brow, Trinity Youth Centre, Lower Well Head Farm, Bull Hole Farm, and Waddow Hall, but it was Tynedale Farm house where things got really terrifying.
During the live investigation of the house several team members said they felt like they were being choked and one-by-one left the location. Team member, Stuart Torevell was the first to experience difficulties breathing and left the house, he was followed by a further three crew members who also reported the feeling of being suffocated. 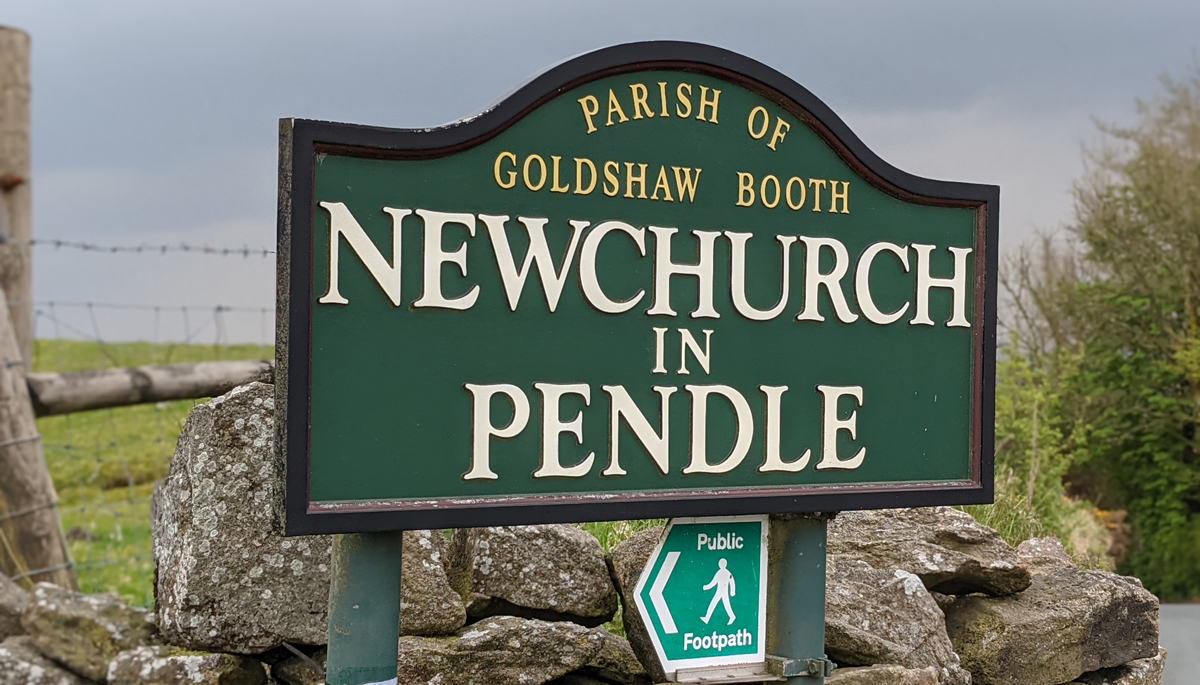 Location: View on map
Parking: Free on-street parking
Walk: < 15 mins
Your first three stops are in Newchurch-in-Pendle, famous for the Demdike family of Pendle witches who lived here in the 17th century. You should be able to find some free on-street parking here and the village is very small, so it won't take you long to walk between the three locations.
Your first stop is the graveyard of the historic St. Mary's Church. Against the south wall of the church you'll find a gravestone with a skull and crossbones carved into it. According to local legend, this is the grave of accused witch, Alice Nutter - although this fact is disputed. It's also said that another of the accused witches, Anne Whittle, desecrated graves in this churchyard to steal teeth to use in her occult rituals. 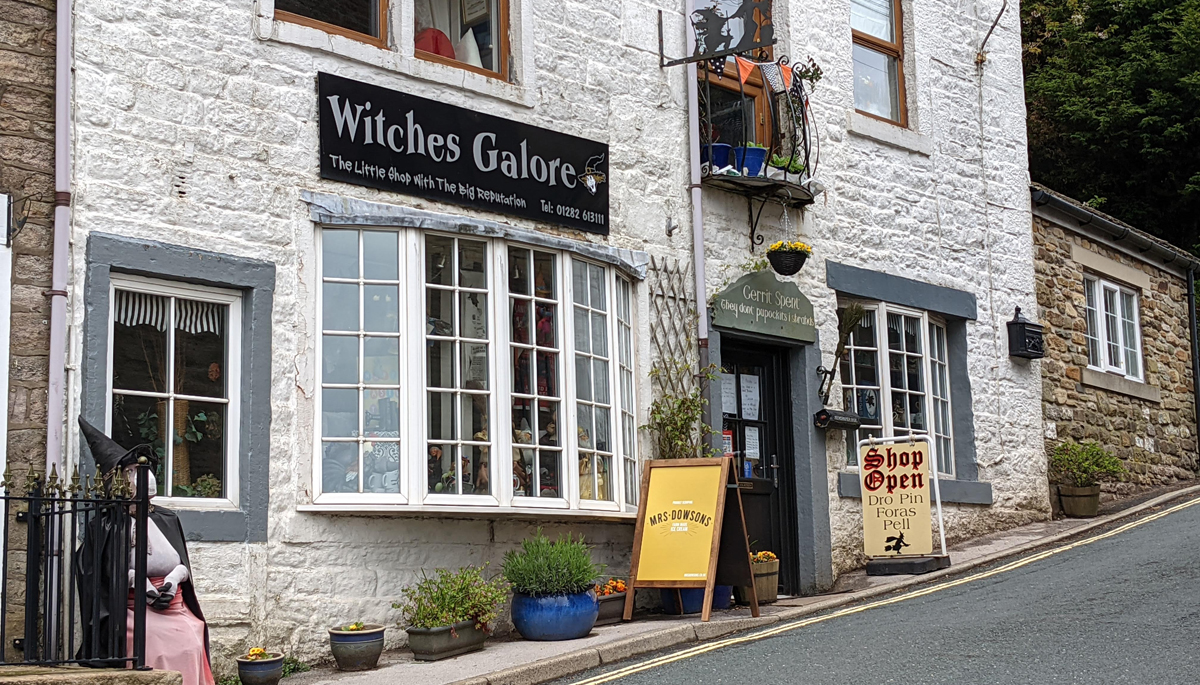 Once you've had a look around the graveyard, walk up the hill to your next stop, a little shop that's big on witches. Witches Galore is a must-visit shop that sells witch-related gifts and collectables, including Pendle Hill souvenirs, local interest books and a selection of witchcraft products.
After leaving the shop, continue up the hill and after a short walk you'll reach a bend in the road. This is the best place to see the famous Pendle Hill itself in all its glory.
Once you've soaked in the view, walk back down the hill to your car and get ready to get up close and personal with the hill. 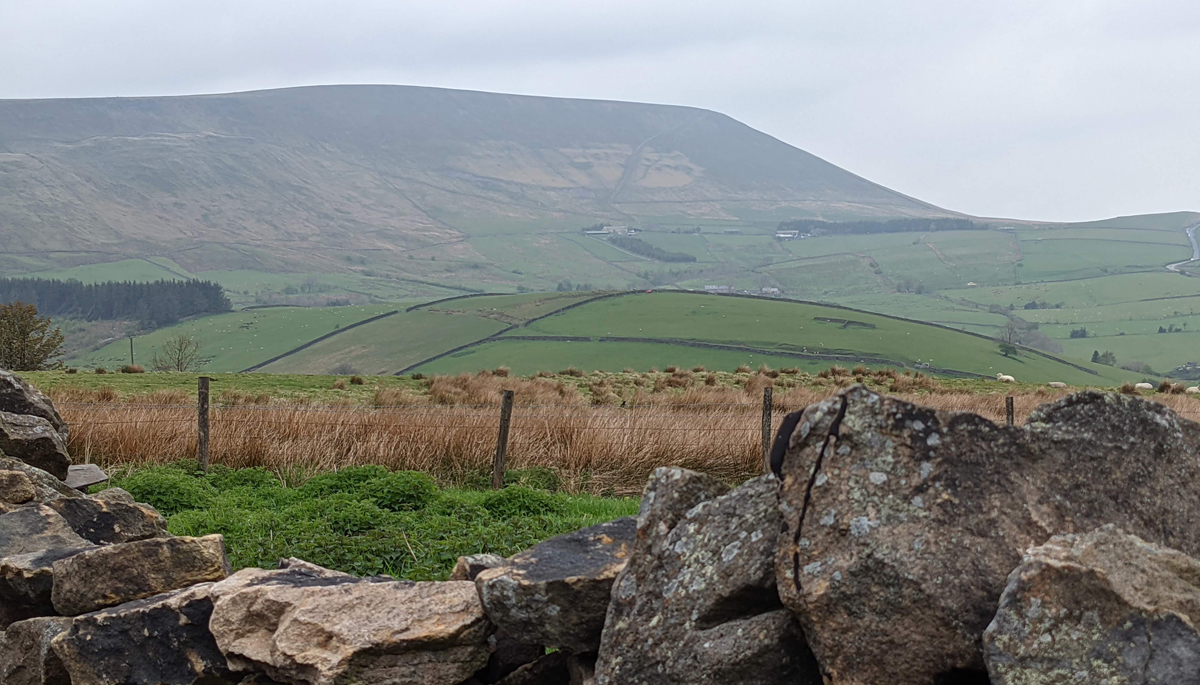 Location: View on map (Parking)
Parking: £1 honesty box
Walk: 2.5 hours
From Newchurch it's just a short drive to the neighbouring village of Barley. Head for the carpark in the heart of the village where an honesty box parking charge operates. The carpark has a great little cafe in it called The Cabin, which is the perfect place to grab a coffee or a snack before your walk up the hill. There's also handy public toilets in the carpark.
There are several routes up the hill, the easiest is a five mile long circular walk which takes about two and a half hours. Obviously the walk is very steep in places and covers rugged terrain across moors.
For specific details on the walk and route, we'll hand you over to the experts at Walks in Lancashire, who have already written a detailed step-by-step guide to this circular walk. 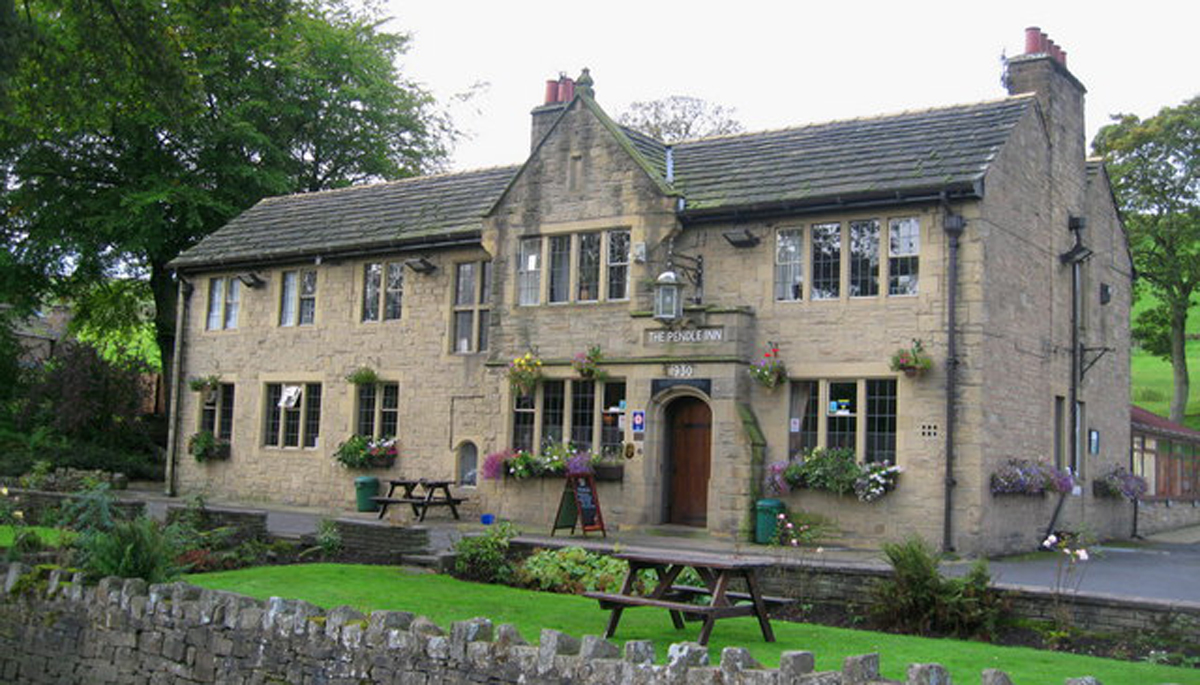 Photo: © Paul Anderson
Location: View on map
Parking: Stay at Barley carpark
Walk: 2 mins from carpark
Your final stop of the day is the Pendle Inn, a pub in the village of Barley just a couple of minutes walk from the carpark. The pub is popular with walkers and cyclists and prides itself on its honest Lancashire pub food. We highly recommend the incredibly meaty homemade Pendle pie and the outstanding beer battered onion rings.
Tags:
lancashirependle hillwitchcraftparanormal