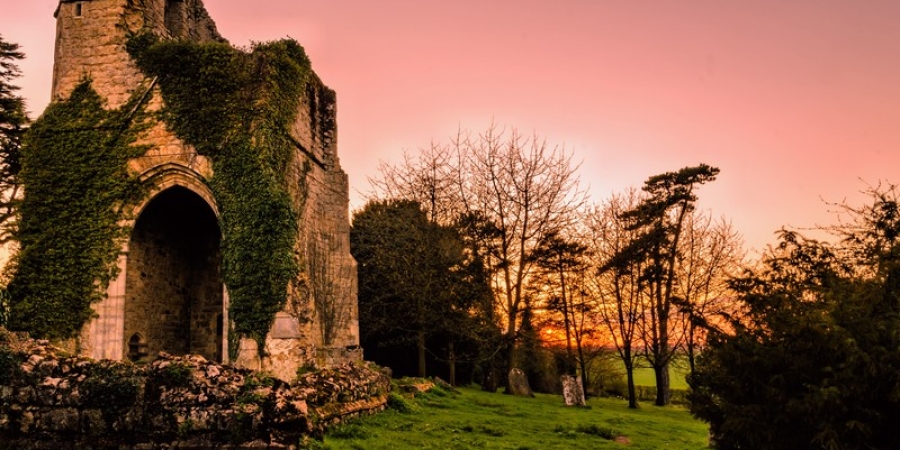 Photo: © Can Stock Photo / Jez22
The hauntings in the picturesque village of Pluckley include sightings of Lady Dering, a sinister monk, a gypsy woman and a highwayman. But, how much do you know about the hauntings that earned the small Kent village the title of the most haunted village in England?
We've put together a quiz consisting of 20 tricky questions about the village's ghost stories. Test your knowledge below...

1. Dering Woods, situated between Pluckley and one of its neighbouring villages is also known as what?

2. The ghost of a murdered 18th century highwayman is said to be seen in which part of the village?

3. What was the name of the celebrity Halloween television special that was broadcast from Pluckley in 2016?

4. The ghost of a small white dog has been seen at which of these buildings in the village?

5. What is the name of the house where the ghost of a threatening monk has been seen?

6. The white lady of St Nicholas' Church is said to be a member of which former famous local family?

7. Where has the ghost of colonel who is said to have hanged himself from a tree been spotted?

8. Which of the village's ghosts is sometimes seen as a faint pink glow at the location where she died?

9. Miller, Richard 'Dicky' Buss, is said to haunt the ruins of his windmill, but what happened to the mill?

10. How is the ghost known as the Lady of Rose Court said to have died?


11. Which of these is the name of a haunted pub in the village?

12. In which part of the village did a drive report hearing the phantom sound of horses hooves on the road?

13. Which of these phantom vehicles has been seen around the village?

14. According to Guinness World Records, how many apparitions haunt Pluckley?

15. The misty figure of a gypsy has been seen at Pinock Bridge. In life what did she collect from the stream and make a living selling?

16. The screams of a worker crushed to death are still heard on the site of what former workplace?

17. Where does the ghost of the Red Lady of St Nicholas' graveyard get her name from?

18. In what year was Pluckley named the most haunted village in England by Guinness World Records?

19. The apparition of a hanging body has been seen in Dicky Buss's Lane, but what was his profession?

20. Which of these apparitions has NOT been reported at The Blacksmith's Arms?