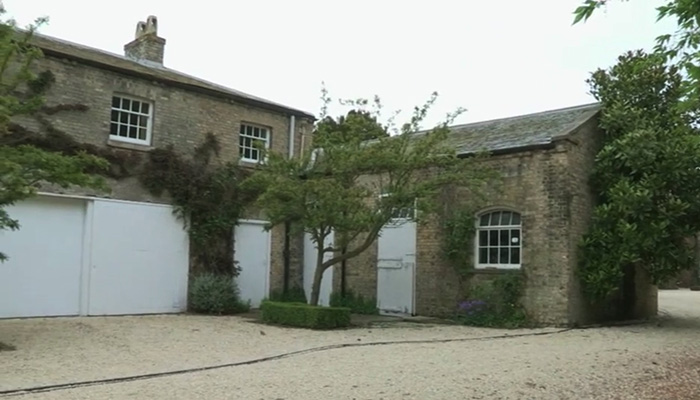 The current series of Most Haunted comes to an end with the second half of the team's mammoth two-part investigation of a Grade II listed regency house in East Yorkshire.
The house gets its name from Sir Lionel Saltmarshe, who was knighted in 1067 by William the Conqueror and given the hall, it remained in the same family for over 900 years.
The hall is said to be home to plenty of paranormal activity including sightings of dark shadowy figures, strange sounds, and even apparitions, including the ghost of a lady in white.
The north wing of the property, which houses eerie cellars and disused stables, has been abandoned for over 70 years. The second floor of this wing has been sealed up for years, in fact the current owners of the property won't even venture in, but in this episode Yvette and her team will conduct the first ever paranormal investigation in this part of the house. 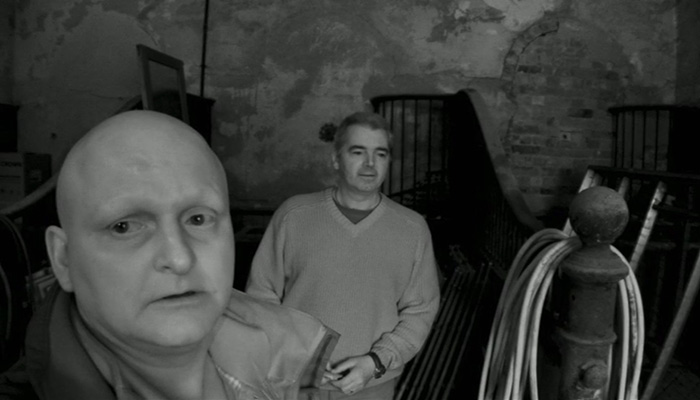 In the first half of the investigation, the team had already encounter plenty of activity. Karl Beattie and Stuart Torevell conducted lone vigils in the cellar, where a very aggressive male spirit is said to haunt. Their vigils ended in them fleeing for safety after hearing knocks and bangs all around them. The others witnesses objects being thrown, including a lightbulb.
The episode ended with Karl and Stuart in the stables where they heard footsteps, which could be clearly heard on camera and lasted for several seconds. Karl said, "those were some of the most proper footsteps I've ever heard." 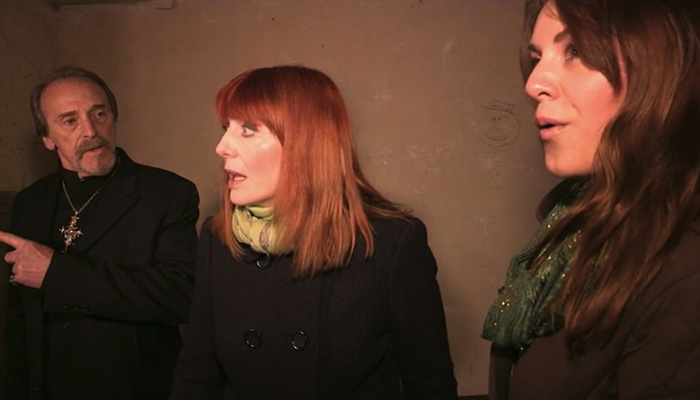 The team's experiences at Saltmarshe Hall continues in the abandoned north wing, which demonologist Fred Batt likens to the Mary Celeste. It's as if the residents just upped and left. The rooms still have furniture and even wall paper on the walls, but the building hasn't been used in decades.
While on the first floor early in the episode, the team heard the clear sound of disembodied footsteps coming from the hallways outside the room they were in. Yvette asked the spirits to tap out how many of them were present, there were 11 knocks in response, and all this before they even turned the lights out.
The house then started producing a sequence of 20 taps, the spirits seemed to answer everything question with 20 taps, regardless of what the question was. Why 20 taps? Yvette and the team were confused by this, but hoped it would become clear as the night went on.
Just as the team finished their initial walk around the wing, an old door knob was thrown at them from an unknown source. 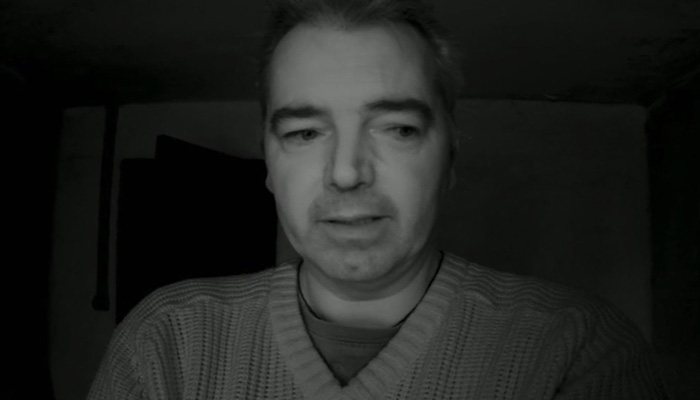 Now with the lights out, Karl was the first to get stuck into the investigation on the first floor alone. Once again he heard banging around him. He called out, "if it's you that's making the noise, can you come closer?"
Perhaps the spirit heard him, as it seemed the bangs turned into footsteps. Backing himself into a corner, Karl said, "these aren't the normal banging sounds, these are footsteps. They're footsteps and they're coming closer."
Karl listened as the footsteps continued for quite some time, until they became faster as if something were running towards him. When they eventually stopped, he said "they were some of the biggest footsteps I've ever heard."
Stood out in the corridor now, it all went very quite and then all of a sudden Karl jumped and shouted, "for crying out loud!" It's not too clear what happened, but obviously something freaked him out. Karl ran back in to the room he'd been in perviously. Looking into the camera he said "I can't see anything, but I can hear it. It's getting louder and louder, I really don't like it."
It was clear that Karl was panicked, but it was about to get worse. He shouted, "it's right on top of me!" And then ran out of the building. 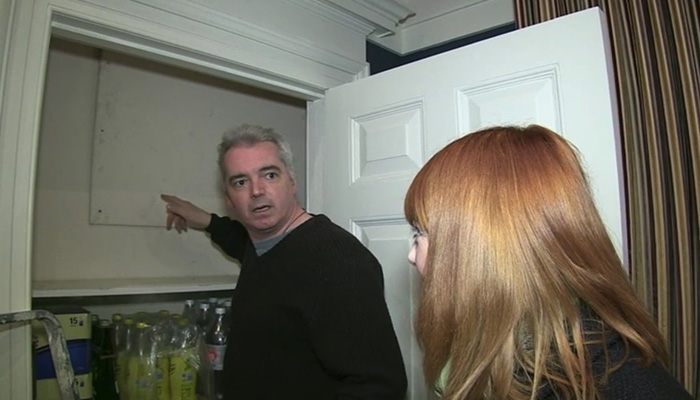 Now it was time to open up the wall that had encased another abandoned part of the building. Before Karl even started unscrewing the panel, which was hidden at the back of a cupboard, they heard knocks coming from the other side of it.
Armed with a screwdriver, Karl removed the screws and removed the panel giving them access to a corridor that no one has stepped in for years. As soon as they got inside they started to hear bangs at the end of the hallway and an object was thrown in their direction. 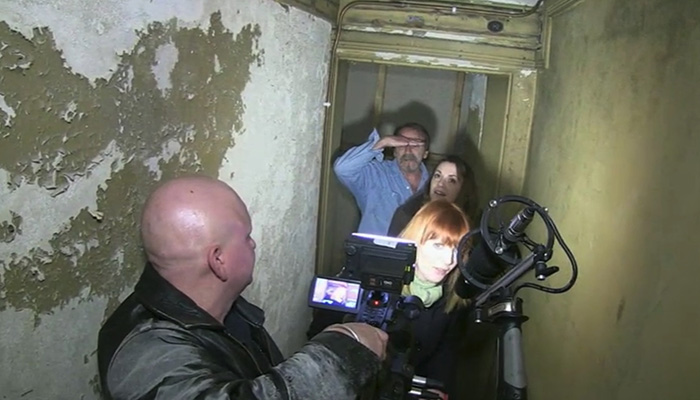 Karl and Stuart were first to crawl through the hatch, followed by Darren Hutchinson, Yvette, Mel Crump and Fred. The eerie abandoned place was made all the more creepy by the skeleton of a dead bird, which was led on the floor.
The team first walked to the end of the corridor to get an idea of how big the floor was, passing several rooms as they did. They stopped in a room at the end of the corridor and Yvette started to call out. They the heard several loud, constant bangs, at least 30 in total.
While they checked out another room, they heard another loud bang out in the corridor. Yvette said, "that was something big."
The team didn't last long on this second floor and before long squeezed one-by-one back out through the hole. 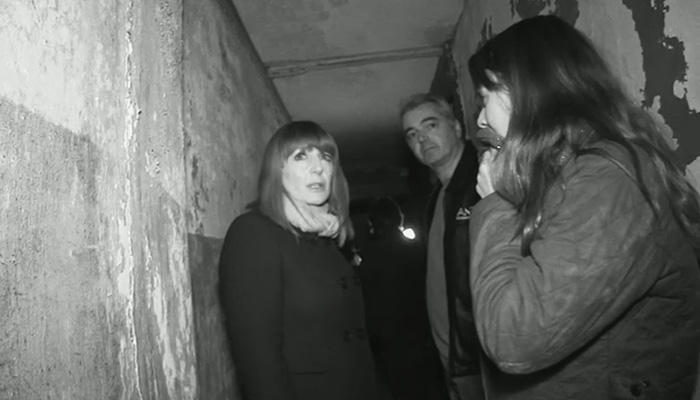 The team then made their way back to the first floor, where straight away they heard and felt knocks coming from the wooden floor, but Yvette wanted more, "it would be great if you could show yourself to us," she called out.
They then heard something land on the floor in one of the rooms as if it had been thrown. They went into the room, but couldn't find anything out of place.
Darren then heard a "jingling" sound, which he said sounded like a servants' bell. Next they heard something else being thrown and found a ball on the floor, Yvette had thrown the balls around the building earlier in the investigation as trigger objects in the hopes that the spirits would move them. Second later the same ball came rolling towards them.
Stuart was impressed by the incident, he said "so that billiard ball actually came towards you guys? I didn't see it, because I was focussed on the other billiard ball, when we saw that, then we heard the other one."
Karl the reported a drop in temperature, but Yvette was ready to call it a night. She said, "I just want to go now, I've had enough. It's just been one fright after another."
The team started discussing the mood in this part of the building, Stuart was just about to make a point, "I'm not a ghost, so I don't know..." and as the team laughed at his comment, they heard another ball hitting a wall at their feet.
It's not clear where the ball had come from this time, presumably from outside the room they were standing in at the time. Darren looked terrified by all of this and said, "I don't want to go back in there." Mel was also ready to leave, so with that the team called it a night.
For reviews of all of the new episodes, plus highlights and evidence from the shows, and to find out when Most Haunted is on next, visit the Most Haunted episode guide.
»Most Haunted At Saltmarshe Hall - Part One