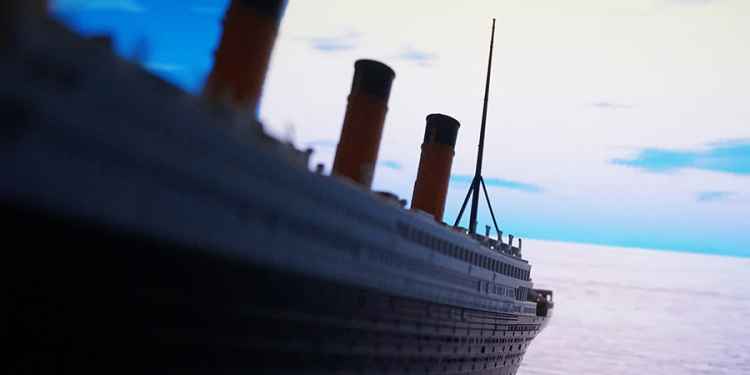 Photo: pixabay.com
It's been almost three years since the last series of the ParaPod ended, but now Ian Boldsworth and Barry Dodds are back with a new series, and in its first episode Barry tells Ian his version of the story of Titanic's maiden voyage.
We've previously had a series of ghosts, mysteries and conspiracies, but this time round there is no theme across the series, other than the ongoing news and updates to build the excitement around the ParaPod Movie. However, in episode one, Barry attempts to bring us all three topics by telling us about a conspiracy, a ghost story and a mystery that all link to the Titanic.
Barry starts off with the basics, telling us that Titanic is "a big ship that sank... supposedly." Over 1,500 passengers died when the White Star Line steamer sank in 1912 on its maiden voyage.
He then gets stuck in with the conspiracy, telling us that there's a theory that it never actually sank. Barry explains, "people believe it was its sister ship, the Olympic."
According to Barry, the Titanic was part of a "trilogy of ships," and on its fifth voyage the Olympic crashed into another ship. The conspiracy states that the ship wasn't insured, which is why they "took the name Titanic, whacked it on the Olympic," as Barry put it. While their newest ship that was destine to become the Titanic ended up being called the Olympic.
Meanwhile the original Olympic, now with the Titanic name plate, was sent off on its final voyage, when it was intentionally sunk as a massive insurance job.
Barry then adds to the conspiracy by telling us that at the time the Titanic first sailed, the American financier J. P. Morgan, who controlled the White Star Line's parent corporation, was trying to set up the Federal Reserve Bank, but three men opposed it - John Jacob Astor, Benjamin Guggenheim and Isidor Straus. These three men were amongst the victims of the disaster. Coincidence?
Then Barry takes us into "the realm of the supernatural". He tells us about a mummy that was donated to the British Museum in 1889, the Princess of Amen-Ra. Barry says that once the artefact arrived at the museum unexplained and unfortunate things started to happen. Barry said, "the staff would hear banging and crying. The watchman who looks after the museum, he died. Things got thrown around the room." It's also been blamed for several deaths.
But what does all this have to do with the Titanic? Well, Barry tells us that when the Egyptian coffin left the museum, it was sent to America on the Titanic, and therefore could be responsible for its sinking.
With the conspiracy and the supernatural story done, all that was left for Barry to tell us about was the mystery surrounding the Titanic disaster. He tells us, "there's a school of thought that says that it was always doomed". He explains that the number on the ship's hull cursed it, "3909 04, you turn it upside-down... 'no pope'." After laughing hysterically, Ian is quick to point out that 3090 04 upside-down doesn't say "no pope," what Barry actually means is when it's reflect in a mirror it vaguely resembles the phrase.

Ian summed up after Barry's story by saying, "I personally think the original story is probably what happened," but didn't rip the story to shreds as much as he has in past episodes. Perhaps his level of frustration with Barry has dropped as they haven't recorded together in a while, or perhaps it was because Barry didn't really believe all of the stories himself.
Speaking about the conspiracy element to Barry's story, Ian said "that's not a conspiracy theory, because the second you put the name Titanic on it that then becomes the Titanic," and as we all know, the Titanic DID sink.
As for the theory that the purpose of the ship's maiden voyage was to murder three businessmen who opposed the plan of J. P. Morgan, Ian points out that building a boat isn't the most logical way to kill someone.
Ian was also able to use logic to cause Barry to question his story about the cursed mummy, he asked Barry, "did they take any other things into the British museum around that time? Why aren't they blaming them things?" But Barry defended the claim, "you don't get like a spooky dinosaur bone or something do you".
However, Ian blew the story out of the water when he told Barry that the mummy was "in the British Museum until 1990" and therefore could have never been on Titanic. On top of this, 3909 04 was not the hull number of the Titanic, any other part of the ship, or the boat yard.
It was great to hear Ian and Barry back with a new series, and while the Titanic as the main thread wasn't the most interesting of topics, the banter at the start of the episode, the titbits about the movie, and the return of BD Files made for a very entertaining listen.
The first episode of the new series was released exclusively to Ian's Patreon backers ahead of its general release and it included an additional 25 minutes of audio. Ian will also be giving backers early access to future episodes, you can get access to this exclusive content by joining Ian on Patreon.