Most Haunted At The Tivoli Venue - Series 17, Episode 1 Review 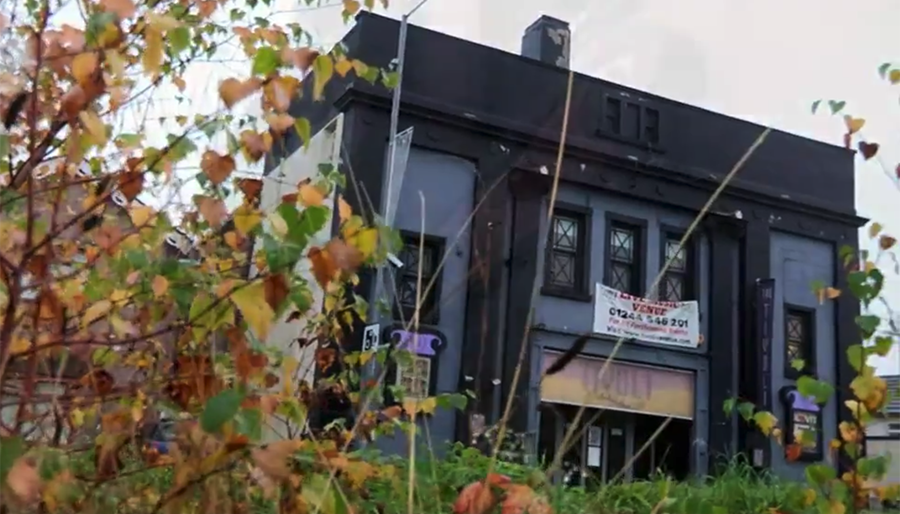 The owners of the Tivoli Venue in North Wales called Yvette Fielding and her team in to investigate the claims of paranormal activity there. The building was once the town hall serving Buckley, but after it was demolished, a cinema and music hall was built on the site in 1925.
As well as rumours of residents spooks, the building has also played host to some of the biggest bands in the world, including The Beatles, The Rolling Stones, and Coldplay.

Is The Tivoli Venue Haunted? 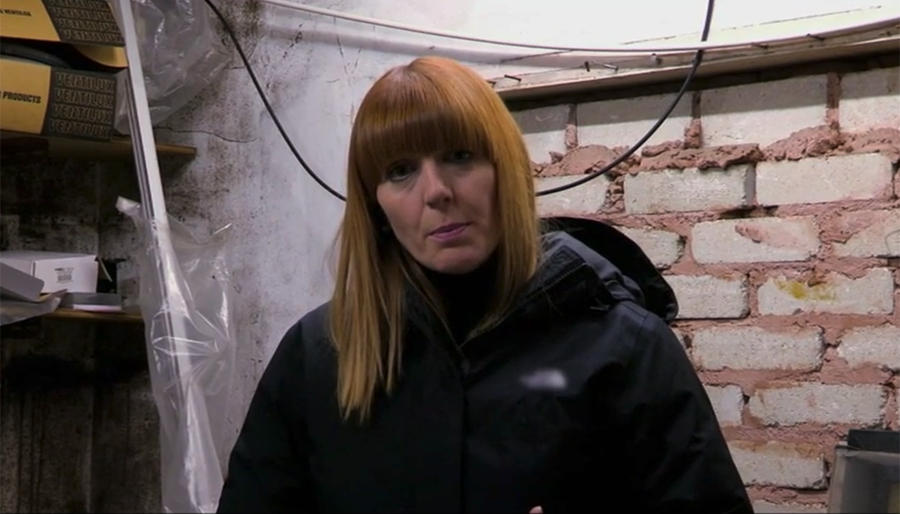 During her initial walk round, Yvette filled us in on the haunted history of the location. Staff have reported seeing the figure of an old man walking down a flight of stairs on numerous occasions, usually when the building has been locked up and customers have left.
A small office room plays host to the image of a hanged man, he's been spotted on security camera by members of staff, but when the owner rushed in to check, he found the room was completely empty. No one know who he was or why his terrifying image haunt the building?
In 1945 a fire destroyed the top half of building, resulting in a death of a projectionist who was trapped in the projection room. Some visitors to the building say they feel the sensation of being burnt when entering this room and many have seen or smelt smoke.
The show's demonologist, Fred Batt, is very excited about this location. He said, "there is so much paranormal activity in this building that it's hard to know where to begin. Tonight is going to be a great investigation. We've got three new people on board, we've got new equipment on board, and apart from anything else, this place is really haunted." 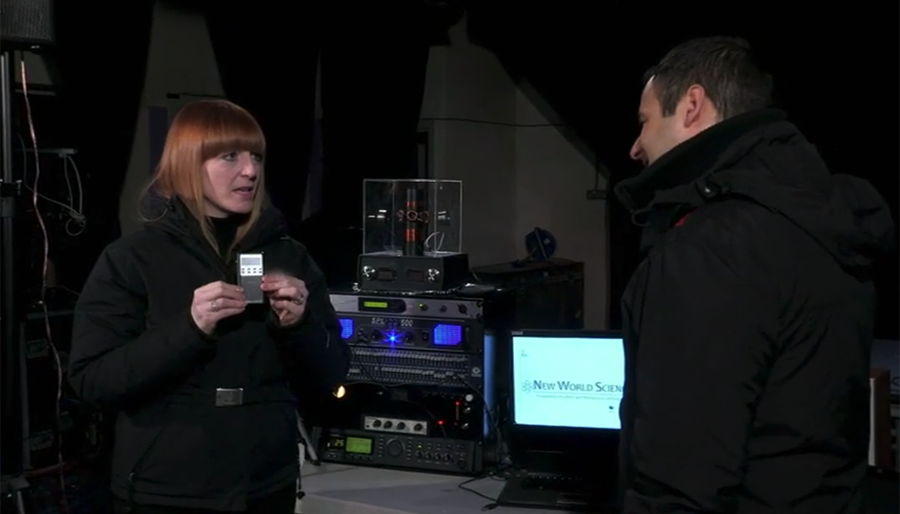 Yvette then introduces us to the first new member of the Most Haunted team. Eamonn Vann-Harris is an EVP specialist, which basically means he's very good at capturing recordings of spirit voices using an array of specialist equipment.
Yvette explains that they used to use a device called a Ghost Box on the show around eight years ago. This gadget scans through radio waves and is said to give spirits the opportunity to communicate using words. But, Yvette wanted to go bigger and better, which is where Eamonn comes in.
Eamonn isn't convinced that devices like the Ghost Box works, he says "we decided to take a more scientific approach," before explaining how his device works.
It take a few different inputs, including an artificially generated carrier wave, white noise, and an odd looking electromagnetic coil-like antenna on top picks up "scalar wave," a form of energy which spirits are said to use to communicate.
A computer processes all of this audio, even in frequencies outside of the human hearing range. The carrier and scalar waves are then filtered out and the frequency is changed and amplified to make it audible to us. 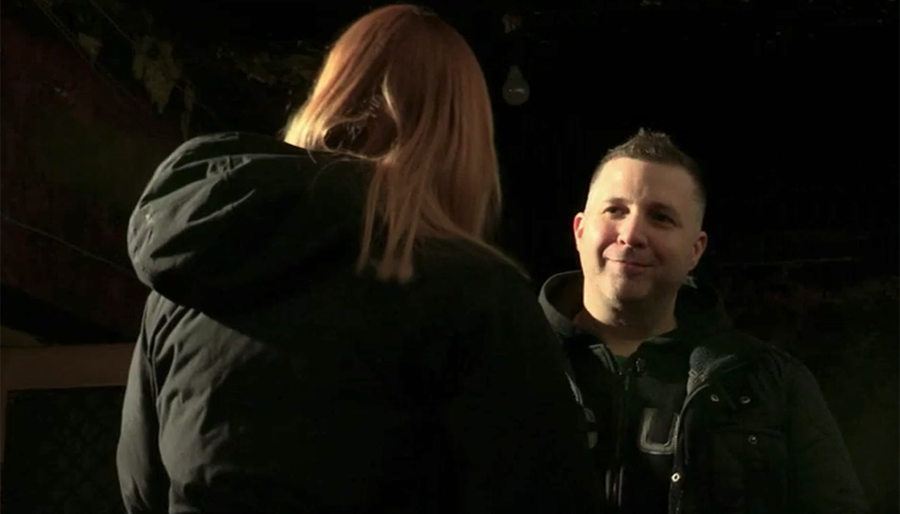 Then it's on to the next new member of the team, Glen Hunt, who Yvette introduces to us as a broadcaster and skeptic. Glen's here for the rest of the series to look at the logical side of everything.
Glen explains that his role is to answer some of the viewers' questions, when they wonder whether the sounds the team hear and the things they experience might be the result of something that's not paranormal, like creaking floorboards.
Glen says, "I'm the lucky viewer, I suppose, inside the TV right now, just having a look at this and saying 'can I be more objective whilst I'm actually on the location with you?'"
Yvette tells us that during filming earlier in the day a crew members Karl Beattie and Stuart Torevell were filming in the location when a mirror smashed. We see the clip from earlier, the sound of the mirror smashing can be heard even though they are no where near it.
Glen gives his take on this incident, "before Karl and Stuart were actually down those stairs, and they did work their way back up again and it's quite possible they might have dislodged something on the floor that was supporting the mirror."
Glen adds, "I think the role of a skeptic is to keep a level head when everything around you is going off and people are putting two and two together and possibly making five. It's easy in a situation like this to jump to conclusions and assume something of a paranormal issue." 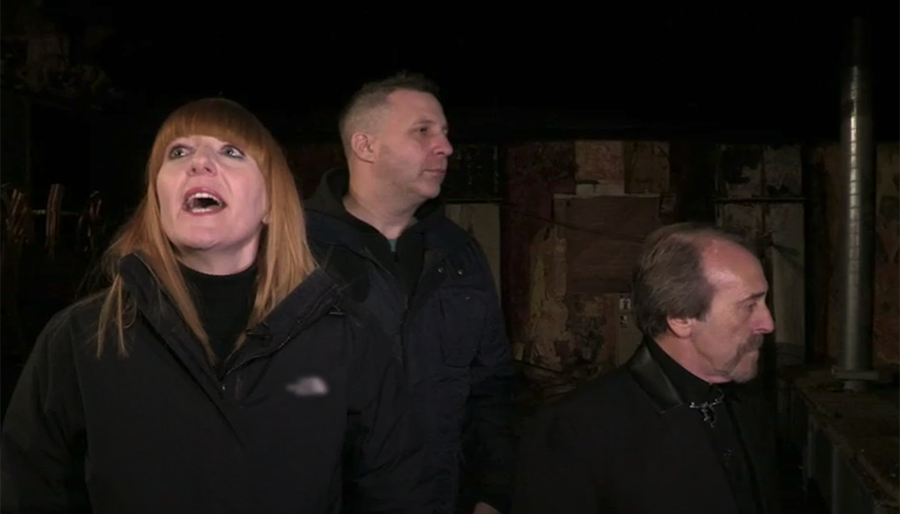 With new boy Glen along for the ride, the team head upstairs where she starts the investigation by calling out to the spirits, along with Fred. Straight away they heard a whistle in response to Yvette's calls. Minutes later they heard and unexplained knock and more whistles.
From behind the camera, sound man Darren Hutchinson confirmed he was hearing the sounds on camera and another new member of the team Leah Walton said she was clearly hearing the sounds. 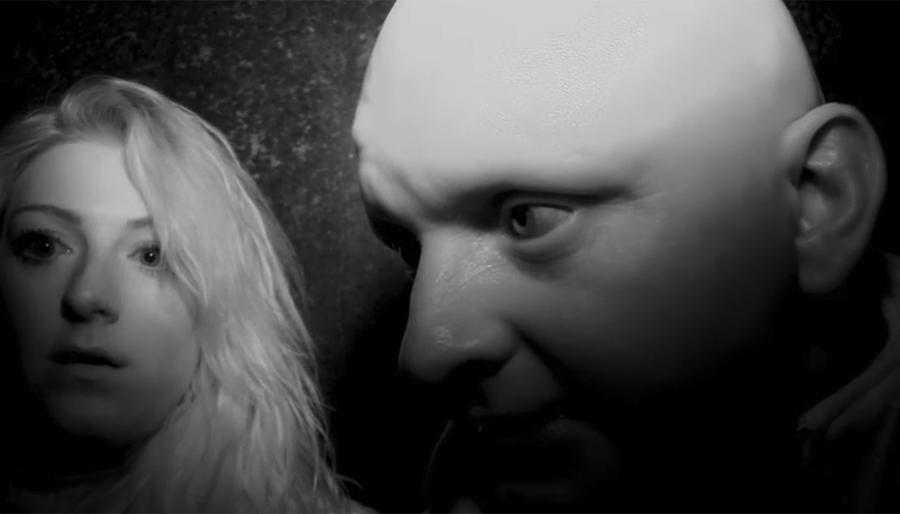 With the lights out, the investigation proper began, and Yvette wanted new girl Leah, whose primary role is hair and makeup, to jump in head first. So, she was sent off with old pro, Stuart and straight away she was freaking out on the upper floor.
Almost straight away Stuart told her, "listen, calm down because you're going to have an accident." Stuart suggests that they walk forward, but Leah snaps, "no." So, Stuart asks, "would you like to call out," to which she says "no, no. I'm scared." Well, seems Leah is going to be a real team player then.
Stuart starts to call out, "can you show yourself..." but is interrupted by a bang, causing Leah to scream and swear uncontrollably, before saying "no, I'm not going down there, no way." This was followed by much more screaming, before she ran off. 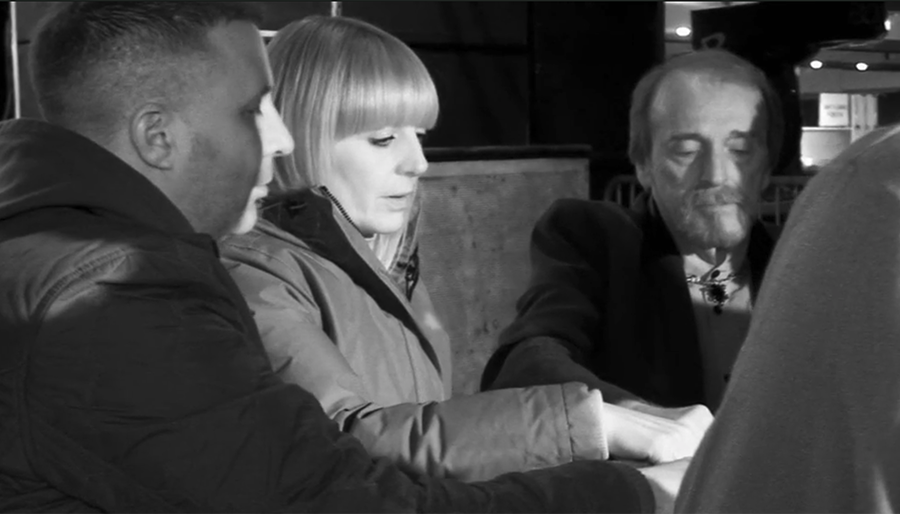 Yvette then gathered the team to conduct a ouija board session alongside Eamonn's EVP equipment. Sat between Fred and Glen, and with Karl, Glen and Leah also sat around the board, Yvette started calling out, "if there's anybody here with us now, that can hear my voice, that can see us, and you are here in this place, come towards us now."
Yvette asked how many spirits were present, and the glass that the team were lightly resting a finger on moved to the number three. Eamonn sat behind them monitoring the audio coming in through his equipment. Eamonn started asking question, at one point he asked the spirit for its name and it seemed to say a garbled "Harry", meanwhile the rest of the team had spelt out the same night on the board. 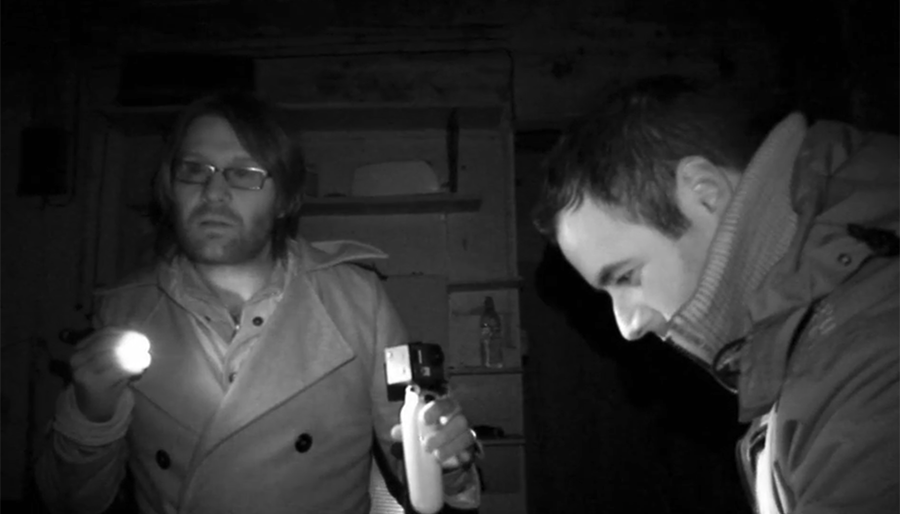 The team suspected that Harry was the projectionist who died in the fire, so they went to the projection room armed with another of Eamonn's gadgets. They called out to the spirit and recorded any potential responses from the spirits on a laptop. Upon playing it back another garbled screeching noise could be heard, it really was just a noise, but Yvette, Eamonn and Darren, especially, seemed to be very impressed by this.
They then ask a few more questions like, "Harry, can you hear me clearly?" and "is this the room that you died in?" They played back the audio and there seemed to be responses in reply, they were much less garbled than the previous audio, apparently because there was no white noise being used this time. 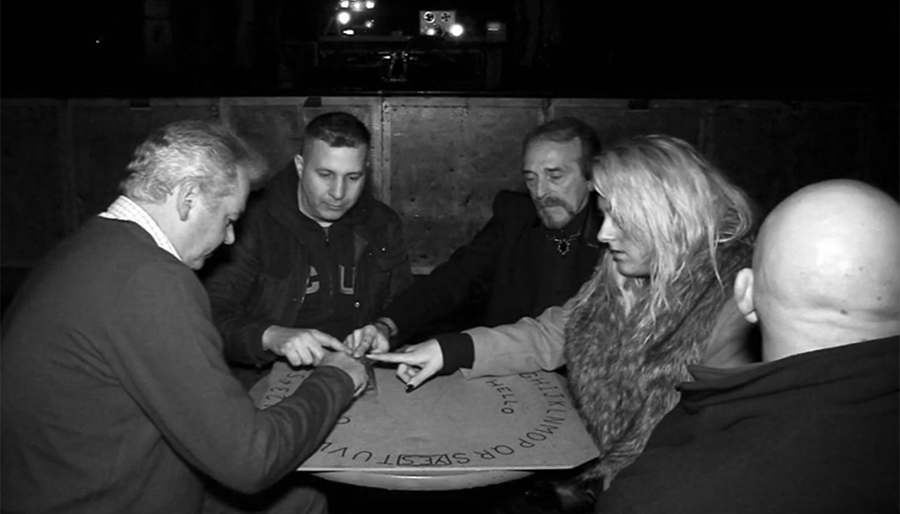 Meanwhile the rest of the team are still downstairs at the ouija board where Stuart spots something, which proves to be too emotional for him to even discuss, forcing him to temporarily leave the investigation.
Yvette and the others were called down to check on him. After taking a brief timeout, Stuart said, "I saw something over there, and whatever it was, I had to get up and go over." He then became emotional again and apologised, "I'm sorry, I can't talk."
He described it to Yvette, "I can't tell you what it was, whether it was male, female, I just saw an object going across the room. So I walked over there and it was almost like something was telling me to stop, because if I carried on, something bad would happen to me." Welling up he continued, "and then something whispered in my ear, 'get out now, before you die', so that's when I walked out." 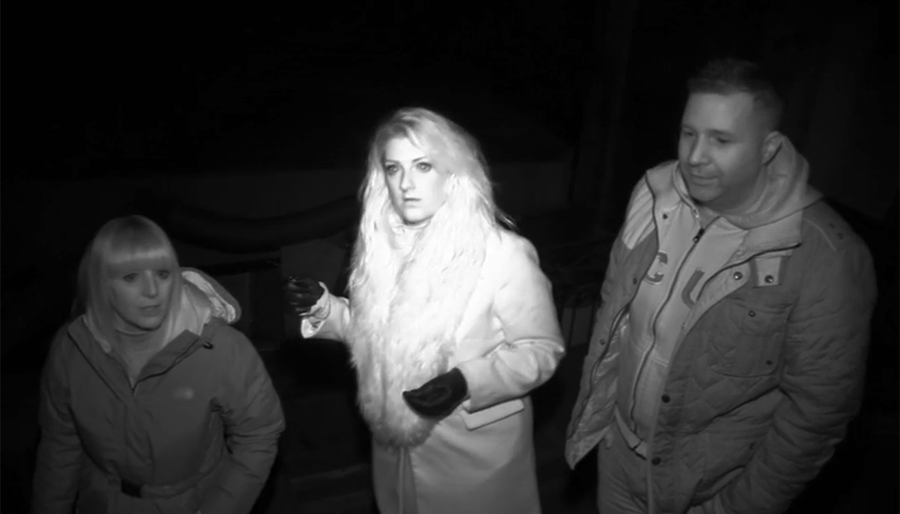 Yvette, Glen, Leah and Gregg went back up to the upper circle, where the team had previously heard the whistling sound and where the mirror had smashed earlier in the day. Yvette and Leah thought they saw somebody on the stairs. Yvette said she saw somebody lean into the room, and then lean out.
Running downstairs they bump into Karl who was investigating after he saw someone come through the door at the bottom of the stairs. Karl said, "Stuart and I were here, and those doors just banged." Excitedly, Yvette concludes, "well, if everyone is accounted for, then I have just seen a ghost."
Back in the upper circle, it wasn't long before Leah was screaming again after hearing what she described as sounding like a piano, this seemed to happen each time they tried to leave the room. Even skeptical Glen couldn't explain the source of the sound. 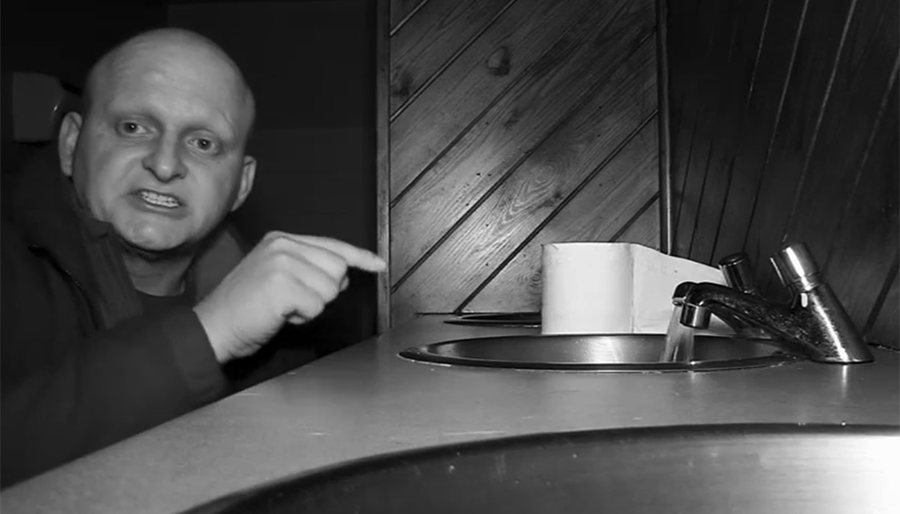 Unperturbed by his shock from earlier, Stuart went off on his own, he decided to investigate the men's toilets where apparently they'd had activity involving a tap and hand drier earlier in the day. He gives us a quick tour of the bathroom and then seconds later the tap was running, without Stuart touching it.
Stuart says, "this tap has come on by itself, I was over there. There's no reason for this to come on." Stuart took a seat on the toilet in the hope that more activity would present itself in the toilets, and it wasn't long before it did.
Stuart was calling out to the spirits, but his requests were cut short when the wall-mounted hand drier behind him spring to life on its own. This happened again moments later.
That was enough for Stuart, and he called an end to his vigil but joined Yvette, Karl and Leah in the cellar. The show ended with a quick investigation of this part of the building, where pretty early on a lightbulb smashed, even though no one could tell where the bulb had come from.
For reviews of all of the new episodes, plus highlights and evidence from the shows, and to find out when Most Haunted is on next, visit the Most Haunted episode guide.