Barry Dodds and Ray Peacock return for a one-off special edition of the podcast, Ray is now known by his real name Ian Boldsworth. This special is in no way special, the pair discuss Barry's encounter with Derren Brown, the latest from 30 East Drive, and a conspiracy surrounding Denver airport. 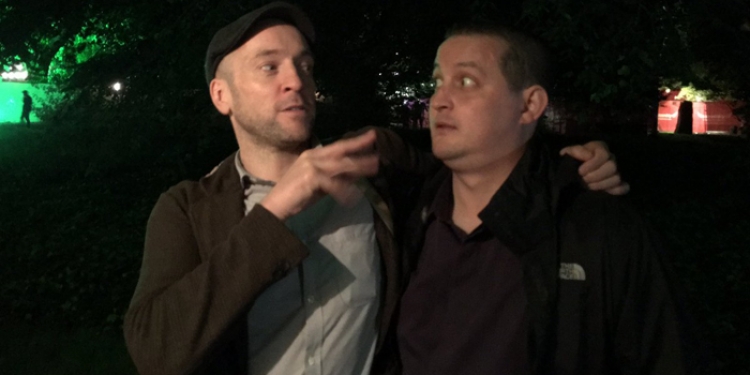 Photo: twitter.com
Unlike the special in the previous series when Barry and Ian visited 30 East Drive to record a ghost hunt, there was no theme for this podcast, apart from the fact it was unspecial.
The one-off Halloween episode was basically just a catch on the Barry's finding and observation on the paranormal since the end of the last series.
First Barry tells us that he bumped into a man who he'd previously described as "as close as we've got to the Devil on Earth." Of course, I'm talking about Derren Brown, who Barry thinks has got powers. After meeting Derren, Barry realised that actually Derren is a nice guy, so he retracted his statement.
Then Barry told us about the latest news from 30 East Drive. According to newspapers there has been a confirmed sighting of the Black Monk of Pontefract in the house. A dark shadow has been caught on camera on the stairs. But Barry isn't convinced, he thinks the it's actually a photo of Emma, the little girl who haunts the house.
Ian said the odd figure in the photo is nothing more than pareidolia, the human tendency to see patterns in random noise, usually a face. This lead Barry on to a really worrying topic.
Barry said he was messing around with a photo editing app called Prisma. He took a photo of his balls and unbelievably he sent it to his mum. He said you couldn't tell what it is, but still, that's a little bit odd.
Barry then went on to tell us that Bigfoot has been spotted in Wales and then again in Lincolnshire.
Then we were told about a Chinese man who stole a ghost from a pub in Bolton using a bottle. So presumably ghosts can pass through glass, which is obviously why you never hear about a haunted greenhouse.
Barry's next story is that of a wanking monkey... I have no idea why.
Barry finishes up with something to get us in the mood for the third series of the ParaPod which will focus on conspiracies. Barry brings is first conspiracy to the table and it revolves around Denver Airport.
Barry says not only does the airport look like a swastika from above, but it's also rumoured to have secret tunnels below the ground and has links to the New World Order, and Barry says the airport is full of "weird art."
The next series of the ParaPod will return on 18th January, 2017. If you haven't yet donated, you still can to show your support for the new series. Click here to donate to help the third series to become a reality.