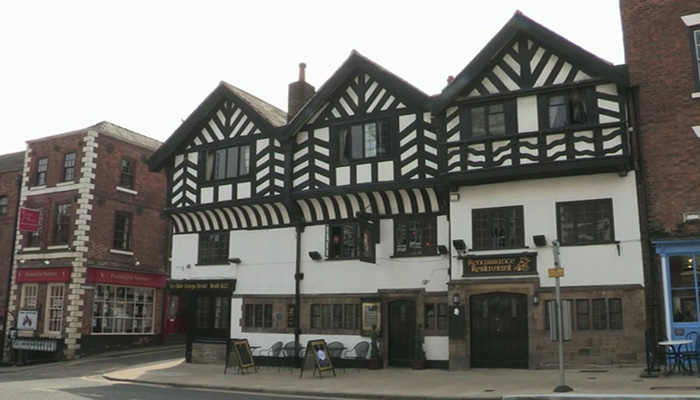 This week Yvette Fielding and her team spend a night in a 400-year-old pub, which is said to be one of the most haunted places, in Chester, one of the most haunted cities in the world.
Chester is known for its historic buildings, many of which are said to house the ghosts of the past, and Ye Olde Kings Head is no different. It was built in 1622, and named after King Charles I. The building became an inn in 1717, and as with all pubs, many different characters have come and gone. 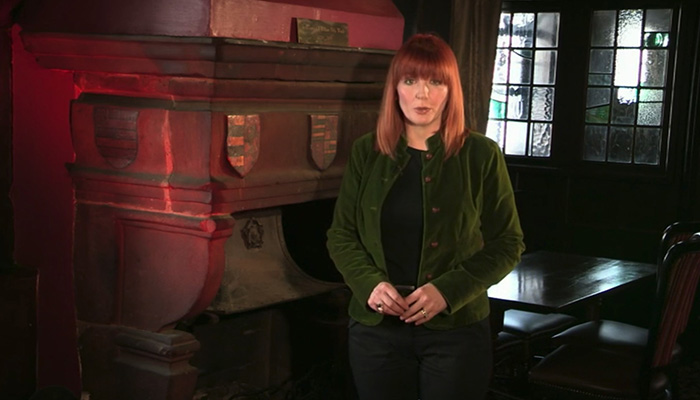 Not only is this pub extremely old, it's also said to be extremely haunted. There are allegedly 13 different ghosts that haunt the pub, some that need help and others that cause harm. From the ghost of a lost little boy to a dark entity that roams the whole building.
The most active part of the inn is the guest bedrooms, where guests have reported their covers being removed, to being shaken awake at night. Others have reported loud knocks on their doors, and unexplained bangs from in and around their rooms.
There's said to be a ghostly dog that stalks the guest rooms, and most terrifyingly of all, a floating corpse that appears over the bed in room three. In room four, a woman is said to appear in the window. It's said that two men took a liking to her and engaged in a duel to win her love, but they both died in the fight. The two men are also said to appear in spirit form in this room.
Apparitions are seen aimlessly wandering the stairs and corridors, including the ghost of a tall well-built man who has an unpleasant demeanour. Others activity includes disembodied voices, the sound of children laughing and playing in the dead of night, and poltergeists pranking the unsuspecting.
According to the landlord, Harry Achilleos, some of the paranormal activity is reported by staff and guests as frequently as once or twice a week.

"This, without a shadow of a doubt, has to be one of my most favourite pubs that we've ever investigated in all the years of Most Haunted."
Yvette Fielding 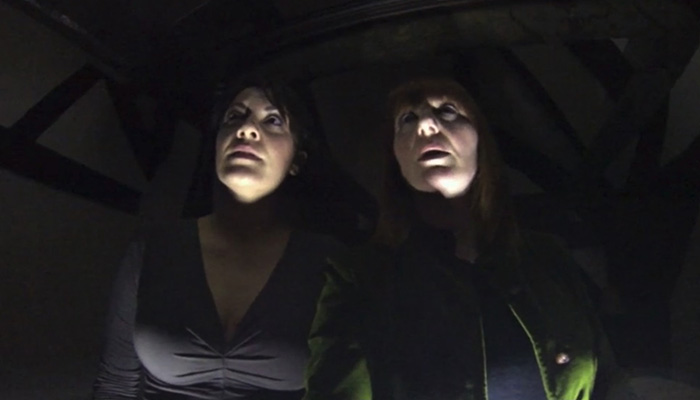 After hearing lots of knocks and bangs on their initial walk around, the team turned out the lights and the investigation began.
Yvette and Mel Crump went alone to the very haunted room six. During the initial walk around they established that an evil entity resides in this room who likes women and want to do harm to Yvette and Mel.
Alone in the dark, they started to call out to the spirits in the room, as they did, a dark shadow seemed to pass in front of Mel. Yvette the heard a faint, repeating thudding sound coming from behind Mel.
Yvette then used the kettle in the room to steam up a mirror on the wall, it's said that the ghosts of the inn have been said to write messages on the mirror. Yvette wrote the word "hello," but no other words appeared or were visible.

So, Yvette moved on to her next experiment. She threw a bar of soap into the corner of the room, in the hopes the spirits would throw it back. But it seemed the spirit didn't want to play along.
Meanwhile, Fred took Karl Beattie, Stuart Torevell and Darren Hutchinson to the cellar. Surrounded by barrels and equipment that runs the pumps in the bar above, the team started calling out to the spirits. Just as Karl said "if you're here, do something," there was a metallic crash. The team panicked and swore and found that a metal dog's bowl had fallen on the floor.
A few minutes later there was a similar crash as the bowl was thrown again, this time landing behind the beer barrels.
After a while, Karl said he had to get out of the cellar as he seemed to have developed a headache since the activity started.

Time For A Lie Down 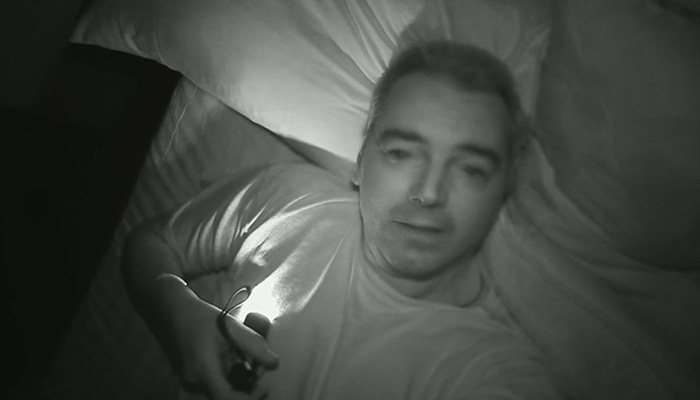 It wasn't long before Karl was back on his feet, he and Stuart headed off on their own lone vigils. Karl started in room six. It started by lying down on the bed and trying to tempt the spirits to repeat some of the most commonly reported activity. He called out, "if you're here, please shake the bed."
A few minutes later he said, "I'm sure I just heard... that's a scratching sound." But the noises wasn't picked up on camera. A few seconds later Karl jumped up when there was the sound of something falling on to the floor.
Then Karl got his wish, he said the bed was shaking. He put the camera down next to him on the bed, which did seem to be noticeably shaking.
Now stood beside the bed Karl said, "that bed's making a scratching sound," but no movement could be seen on camera. 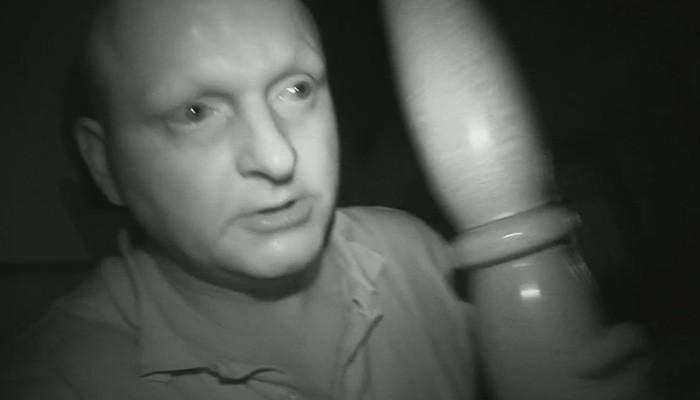 Stuart was alone in room one. Once inside with the door closed, it was seconds before he heard an almighty crash coming from outside the room. He went out into the corridor to investigate but found no one there. He was unable to work out what the sound was and as he investigated he heard sounds coming from inside the bedroom so went back inside.
Back inside the room, Stuart heard something being thrown but could see what it was or where it was in the darkness.
Stuart then noticed a bell on the ceiling and asked the spirits to move it, and seconds later the bell rung and was visibly seen to be swinging. Right after this he heard the sound of running water, he went into the bathroom and found that a tap was running after seemingly turning itself on.
It was all too much for Stuart at this point and he left the room to rejoin the rest of the team. 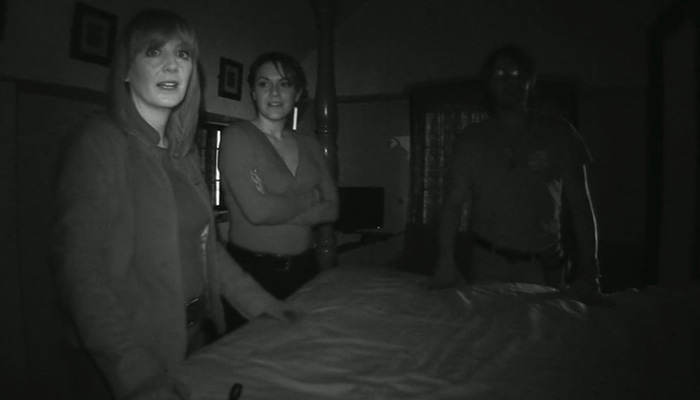 The whole team re-grouped in room six for one last vigil. Quite early on the television turned itself on, even though the remote control was next to the TV and no one was near it.
They then heard banging from the adjoining room, before noticing a coat hanger on the floor. All of the hangers in the cupboard were also swinging, none of the team touched them as far as they were aware.
They moved through into the next room to try to identify the source of the noise, but the room seemed empty and still, until Karl heard a breathing noise behind him coming from the bathroom.
Yvette then said she could hear crying and ran out into the corridor to investigate. It turned out not to be crying but was actually the television back in room six, which seemed to have turned itself on. So, Yvette switched it off but seconds later it turn itself back on.
This happened a few more times, the set seemingly switching itself on and it seem to coincide with Yvette turning the tap on in the bathroom, her theory was that the running water gave the spirits the energy it needed to make this happed. Karl suggested testing this theory by all standing in silence without asking the television to turn on or touching the bathroom taps. They did this for a few seconds and the TV remained off.
Once satisfied that it was not going to turn on again, Karl went into the bathroom and turned the tap on, and the television immediately turned on. The shocked team gasped, Stuart shouted "get lost! That's ridiculous." Karl said, "tell you what, leave it there, I'll turn the tap off and see if it goes off." Karl gave the tap a twist and the television did indeed power down.
The television then seemed to respond to by turning on and off as Karl turned the tap on and off. Weirdly, Karl then made a big deal about putting the remote control in front of the camera and ensuring himself and the television were also both in one single shot. But before he turned the tap on again the camera angle change so that you could see neither Karl or the remote control. I'm pretty sure the remote control wouldn't have moved as it was next to the television throughout anyway, but it's an odd thing to do if you're trying to prove something.
For reviews of all of the new episodes, plus highlights and evidence from the shows, and to find out when Most Haunted is on next, visit the Most Haunted episode guide.