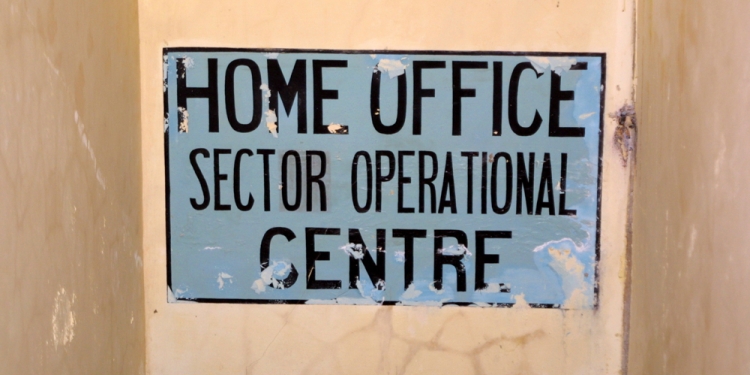 A small stone quarry to the north of tunnel quarry in Corsham which was converted and used as the underground headquarters of No. 10 Group Fighter Command and as a ROTOR training station, the site is now abandoned.

This is Ministry of Defence property, all the entrances are within their fences and the quarry adjoins active MOD facilities.

Browns Quarry is a small quarry to the north of Tunnel Quarry, although connected Browns Quarry has nothing to do with the ammunitions depot however it was constructed by the Royal Engineers at the same time. In 1940 it was converted, at great expense, into a secure underground Command Centre for No 10 Group, RAF Rudloe Manor.
Browns Quarry was one of the most challenging construction tasks undertaken at Corsham as the operations room called for two chambers, fifty feet square and forty-five feet high both with two mezzanine observation floors.
The walls of the operations room were finished in a special paint scheme consisting of greens and yellow, designed not to distract the operator. The control room centred around a plotting table, the controllers could monitor the progress of the enemy towards Britain from the two wooden mezzanine floors above.
The control room was responsible for nine fighter air fields in the West of England and Wales which were home to 19 squadrons using 113 aircraft. The group commander who sat in the gallery would scramble appropriate squadrons to intercept the enemy based on information given to him from fighter command headquarters at Bentley Priory in Stanmore, Middlesex.
In 1945 the room became a radar training centre and between 1951 and 1955 it was the Section Operations Centre for the United Kingdom Radar Air Defence System codenamed ROTOR but by late 1955 the control functions had been move elsewhere and the room was stripped of all of it's fittings.
Later in life the quarry became the Command Defence Communications Network (CDCN), a modern bunker which sits underneath the Skynet Drive where a modern building houses the hub of a hardened satellite communications network which primarily serves the UK armed forces but also to a range of other governments and organisations around the world.
© Crown Copyright Notice: This page includes images reproduced with the permission of the Controller of Her Majesty’s Stationery Office.
Tags:
undergroundwiltshirecorshamurbex