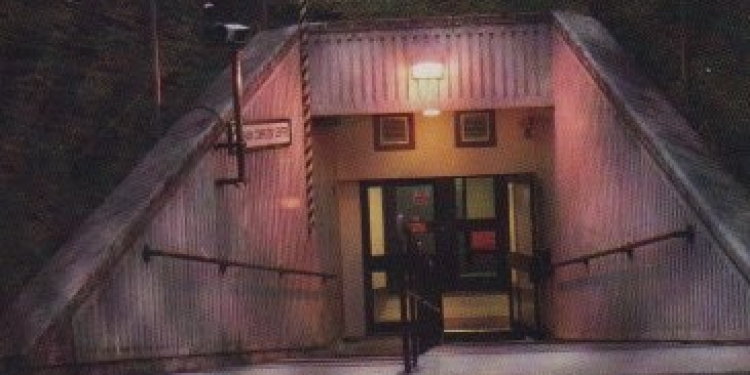 One of the UK's best kept secrets, CCC is an active government bunker located at Peel Circus in Corsham, above ground the site consists of nothing more than a doorway in to a mound of earth, obscured from public view by a ring of trees and vegetation.

This is an active Ministry Of Defence site, there is no public access and the high security presence means you can't even get close enough to this venue to see any surface buildings.

Even the name is shrouded in a small, a discreet plain white sign points to this secret bunker, its plain, black text simply reads "C.C.C." The locals know it as the Corsham Computer Centre, it's official name is the Command and Control Centre.
Passing by you'd never realise the bunker exists, let alone how secure it is and its importance to national security. CCC is built within a huge underground stone quarry beneath Corsham in Wiltshire. During the Second World War, the quarry was converted into a huge ammunition store.
The store, just one part of the Central Ammunition Depot consisted of almost 1 square kilometre of whitewashed, corridors lit with thousands of bulbs. Along these subterranean passageways, an enormous conveyor belt system transport the ammo into the many air-conditioned storage districts.
Following the war the site remained in the hands of the War Department and many areas are still used by the Ministry of Defence today, including a small area at the East end of the former quarry which is now sealed from its underground surroundings to house CCC.
The conversion work to build the self contained bunker was carried out in the 1980s, this included the installation of supports for the old quarry ceiling and concrete reinforcement to ensure that the bunker needed as little maintenance as possible in future.
At the time rumours circulated that the work being carried out in the area was to upgrade Burlington, the former government relocation bunker from the Cold War, however when Burlington was declassified in 2004 it became clear that there was never an upgrade and that since the 1980s, Burlington had been used as a decoy site to divert attention away from other facilities in Corsham such as CCC.
Today, other than emergency access, CCC is sealed off from the rest of the quarry and is accessible via a lift from a discreet bunker style entrance in Peel Circus. Security at the site appears to be low key, however two perimeter fences circle the entrance with a ring of dense vegetation and trees to obscure the facility from public view.
Curious members of the public passing-by can drive down the small road to CCC's gates, which are watched over by several CCTV cameras, this is about all you can see from ground level but from above you see that the beyond the gates is a large mound of earth, a concrete-reinforced entrance leads into the side of the artificial hill.
Anyone with the clearance to enter the bunker would be faced with a plain reception, staff hidden behind tinted glass and two 'Spooks' style test tube doors leading to the bunker's personnel lift.
Of course, all this security and secrecy exists for a reason and there's very little solid fact about what CCC is actually used for. In the last few years it has been claimed that bunker houses a Royal Navy data processing facility or that the site could be a command bunker and alternative national seat of government in the event of a nuclear emergency.
The most likely role, or the Government's best cover story at present, is that CCC is part of the Submarine Command & Control (SMC2) programme, responsible for the maintenance of software linked to the UK's nuclear deterrent, Trident.
Whatever CCC is used for, it's clear that we don't need to know. The bunker doesn't officially exist and details of its interior are nothing more then rumours leaked out by sub-contractors. Some claim that the lift takes you to a plain, whitewashed corridor which circles the outside of the bunker, revealing nothing more than a water cooler.
Beyond the corridor there are tales of a huge, open-plan, operations room with a wall of video displays and staff manning terminals 24/7.

CCC From The Air

This is never before seen footage of the CCC from the air by drone.

Over the years there has been several requests made to the MOD asking for information about the bunker, but most have been refused on the grounds of national security.
The response usually states, "This letter is to inform you that the MOD holds information related to your request, but that we believe the information falls within the scope of the following qualified exemption(s): Section 24 (National Security), Section 26 (Defence). "

Which organisation is primarily in charge of CCC and when did the operation of CCC begin?

Corsham Computer Centre (CCC), which opened in 1990, is a Ministry of Defence owned data processing facility supporting Royal Navy operations.
Under Section 16 of the Act (Advice and Assistance), you may find it helpful to note that former  Secretary of State for Defence, Des Browne, provided a written statement regarding CCC to Parliament in November 2007. The statement represents the MOD’s enduring position regarding CCC and can be found on the Hansard website.

Are there any photos or videos of the inside of the CCC?