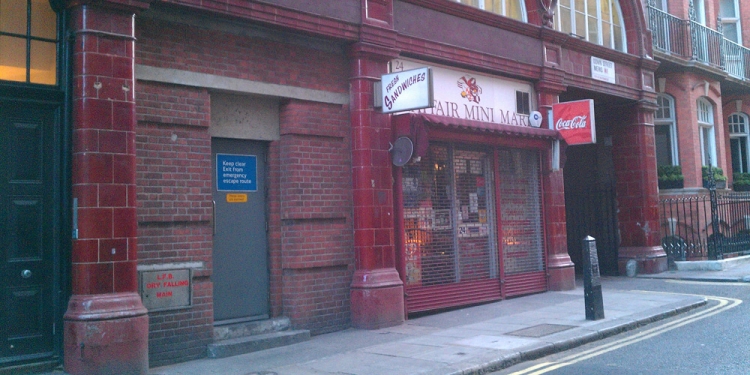 Down Street is a London Underground station between Hyde Park Corner and Green Park on the Piccadilly line, it was closed in 1932 and later used as an air raid shelter.

The site is still owned and operated by London Underground. Transport for London do not allow any tours of disused stations.

Down Street is a London Underground station between Hyde Park Corner and Green Park on the Piccadilly line, it was closed in 1932 and later used as an air raid shelter.
Construction of this stretch of the Piccadilly line started in Knightsbridge in the summer of 1902, the station opened in 1907 with it's surface structure located just off of Piccadilly.
In 1929 plans emerged to extend and improve the Piccadilly line. As part of these redevelopments, Down Street's neighbouring stations were rebuilt. As it was situated in the middle of a wealthy residential area, locals preferred not to use the tube, this couple with the proximity of Green Park (or Dover Street as it was known at the time) and Hyde Park Corner stations are the reasons why Down Street was refused an upgrade and instead closed three years later.
This wasn't the end of Down Street's existence, of course trains still pass through the old platforms on the Piccadilly line, passengers may notice the tunnel lining change a black colour to brickwork.
Originally the pedestrian passageways at Down Street were built, supposedly in error, to a width meant to accommodate trains, this made it a perfect site for redevelopment as the UK braised for the onset of War World II.
In 1939 the station underwent a change at the hands of the War Department, the platforms were walled off from the tunnels leaving a space which could be transformed in to an air raid shelter.
The shelter, which was consisted of office space, kitchens, toilets and wash facilities and dormitories, was designed to house the Emergency Railway Committee, a board put together by the Ministry of Transport as part of the government's planning for Air Raid Precautions.
The committee brought together senior staff from the countries rail companies, their role was to advice the government on how the rail network could be kept operational during wartime Britain.
Before the shelter could be completed, war broke out but one area of the bunker was put in to frequent use. Known as "number 10", one custom designed part of Down Street became the wartime office of Winston Churchill himself.
At this time the Cabinet War Rooms under Whitehall hadn't been completed, so until that time Churchill and his cabinet used the offices available in the shelter.
Since the war the old station entrance has provided access to the Piccadilly line for contractors through a doorway in the clearly identifiable station building at street level. Part of the old station building space at ground level is now occupied by a small shop.