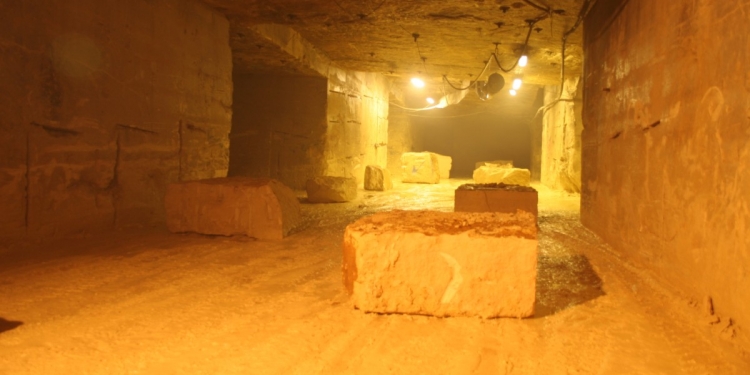 Also known as Hartham Park, it was Bath stone until 1939 when it became a temporary naval store, the stores were then transferred to Dean Hill and quarrying continued. In the 80s the quarry became a quarry museum.

There is no access to this site, it is an active stone quarry.

The Bath Stone Firms began quarrying Bath stone from Pickwick Quarry in 1899. In 1939 as part of the war effort the quarry was used as a temporary naval store holding 10,000 tons of naval ammunition along with Brocklease Quarry in Neston.
As the Navy were unsure about using underground storage modifications needed to be made to suite their needs. A new drift was blasted through in to Travellers Rest quarry, this was because Travellers Rest was originally only access by two vertical shafts. The roof was strengthened throughout, lighting was installed and in the wet areas metal sheeting at roof level was used to deflect the dripping water away from the ammo stocks.
The naval store closed in 1949 when stocks were relocated to Dean Hill and Trecwn. The quarry then went back in to operation as a stone quarry until 1961.
Signs of the former naval use can still be seen in the older parts of the quarry, these parts are not been changed by further quarry work but are being maintained for their historical interest. The mine was opened as a museum in 1986 however it was closed by the end of the 90s.
Hanson now use the original Pickwick slope shaft as an entrance to a new area which they are quarrying to the North of the original quarry.