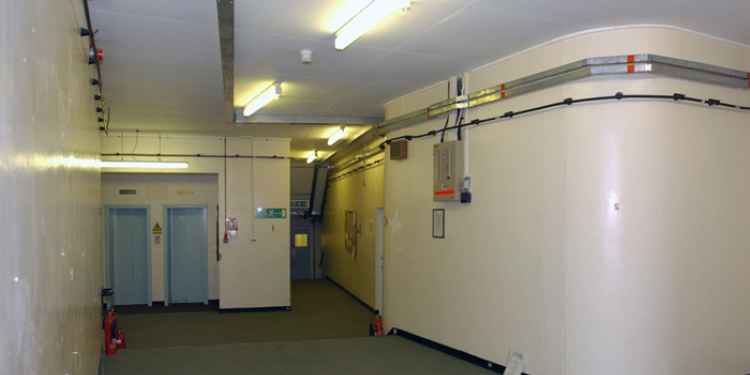 To the Western end of Tunnel Quarry was an area which was the proposed number 1 district as part of the ammo stores, however due to a severe geological fault this area was never developed by Royal Engineers however the air ministry did make use of it 1943 when they converted it in to South West Control, a military communications centre which operated up until the 1990s.

This is an active Ministry of Defence site, there is no access.

Tunnel Quarry is the only part of Corsham tunnel complex which still holds secrets today, the Command and Control Centre (CCC) is situated in the Eastern end of Tunnel Quarry. At the opposite end of the quarry is another area which until recently has been classified.
The ammunitions depot was divided up in to separate, numbered storage districts. The area was designated for district 1 was never developed by the Royal Engineers due to a sever geo-logical fault.
In 1943 the Air Ministry took over the area in 1943, because of the fault running through the area converting the area of Bath stone quarry was challenging, galleries from mining days had to be skilfully squared up and the floor graded an electric lift from the surface was also installed for access. This gave approximately 30,000 sq feet of office space.
This area was used by the Air Ministry as a telephone exchange serving he South West of England, it was known as South West Control, the bunker housed communications switching equipment, telephone switch boards and teleprinter equipment.
The site later became known as PNCC (Primary Network Control Centre) as it continued it's life as a military communication centre until it closed in the 1990s.