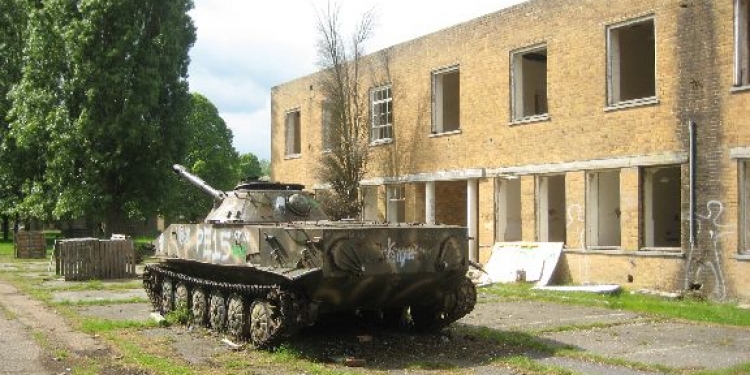 Upwood is a former non-flying RAF station near the village of Upwood. The site as it stands today started its life under the control of the US Air Force in 1981, much of the site was closed in the mid-90s, leaving it many buildings and underground spaces to decay. The site consists of several derelict buildings, four of which have underground bunkers, there's a hospital, police station, a water tower and much more.

There may be some limited access to this site, however the current state is unknown.

Originally the site was used by the Royal Flying Corps as an airfield during the First World War, at this time there were no permanent buildings on the site. Following the war, the land was returned to the local community.
The site was brought back in to operation following the invasion of Poland in 1939, leading to the start of the Second World War.
The two squadrons stationed there were no involved in front-line combat, but on two occasions in 1940 and once in 1942 the airfield was attacked by Luftwaffe aircraft. At its WWII peak, Upwood had a working population of over 2,500 people.
The RAF continued to use Upwood following the Second World War and through the majority of the Cold War. In 1981, the Ministry Of Defence handed the base over to the United States Air Force.
Upwood acted as a satellite station for nearby RAF Alconbury, providing accommodation and support services for personnel. In 1986, all the support services from RAF Alconbury moved to the headquarters building at RAF Upwood.
When the Cold War wound down in 1991, so was RAF Upwood which was handed back to the British government. It continued to house US airmen and their families until 2005.
The hospital building and medical facilities remained open as a medical flight unit until 2007. On 26th October 2012 RAF Upwood finally closed its doors.
Tags:
undergroundcambridgeshireurbex