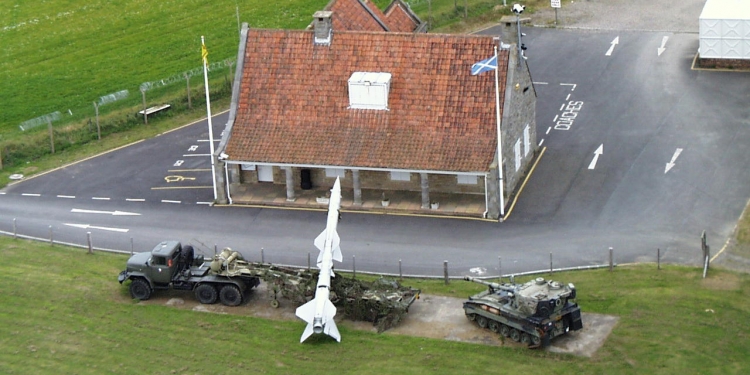 One of the UK's biggest and most secret bunkers was hidden in the small Scottish town of Anstruther, near Troywood in Fife. Like Kelvedon Hatch, this regional government hideout was hidden beneath an innocent-looking Scottish farmhouse.

The bunker was originally built as a radar station during the Second World War II but was later rebuilt as part of the ROTOR project in the 50s before coming a civil defence bunker in the 60s.
The Northern Zone Regional War Room took over the site in 1973 and remained in use during until the collapse of the Soviet Union as the Cold War came to an end in the mid 80s.
The bunker which was kept secret for over 50 years and in use until 1993. It would have been occupied by UK Armed Forces and civil servants in preparation for a potential nuclear emergency.
A 3 ton bomb-proof blast door protects the entrance to the bunker, once passed the blast door and beyond the bunker's three meter thick walls you enter in to a protected space, suitable to house 300 staff, spread over 24,000 square feet and two levels.
Complete with a sophisticated air filtration system, back-up generator and catering facilities keeping Senior Ministers and civil servants safe for an extended period of time. Ministers would have evacuated to the bunker from Edinburgh.
The lower level of the bunker, the main command floor offered office space for the emergency services and scientific advisors, there were also station for the Met office and an office for the Minister Of State while the Secretary Of State would have been housed upstairs in his own office suite.
The bunker's primary purpose was to maintain communications with the rest of the UK, operational status information would be shown on maps and wall charts in the Civil Defence Operations Room.
The bunker was fitted with original, manually operated telephone switchboards boasting 2,800 outside lines and 500 internal extensions. These lines were essential to maintain communications with the Prime Minister's office and various military and civilian organisations locally and nationally. There was a BBC radio studio which could be used to broadcast vital information to the public.
To ensure all the bunker's technology remained in working order, the whole facility was enclosed in a Faraday Cage, a conductive shield which protects electronic equipment from the electromagnetic pulse of a nuclear detonation.
Six dormitories contained enough beds for the bunker's inhabitants using a "hot bed" system, working shifts and making use of a bunk while other staff members were on duty, this would become their lives for over three months.
Following the Cold War, the bunker was unused for a decade before being reopened, this time to the public as a museum in 1994. It is now known as Scotland's Secret Bunker.

See inside one of the UK's biggest and most secret bunkers was hidden in the small Scottish town of Anstruther.