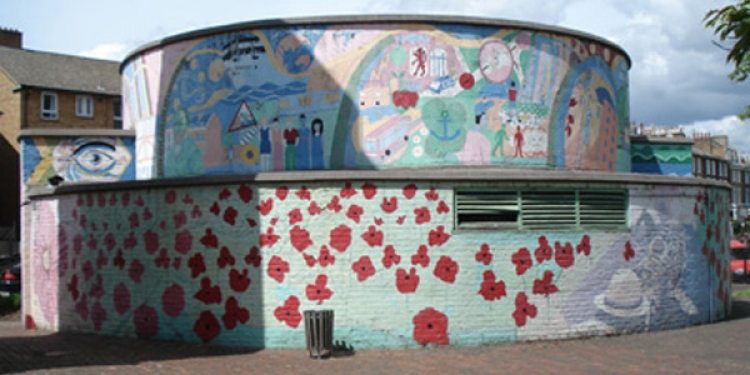 During the Second World War eight deep level shelters were built underneath stations on the Northern Line. The Stockwell shelter was completed in 1942 and was used as a public shelter for a year in 1944. The shelter is now used as document archiving warehouse.

The shelter is in private hands and operated as a document archiving business. Public access is not permitted.

Originally there were plans for deep level shelters to be built under ten of the London underground stations on the Northern Line. Construction started in 1940, within two years the shelter at Stockwell was completed, as well as seven others at Belsize Park, Camden Town, Goodge Street, Chancery Lane, Clapham North, Clapham Common and Clapham South.
The shelter was originally put to use by the government, but by 1944 as bombing increased in London, the shelter was used for a year as a public shelter with the capacity to house around 1600 people.
The shelter was constructed under Stockwell's existing underground station platforms. It consists of two tunnel, which were much larger in diameter than those of the underground station. The tunnels larger diameter meant that it could be divided in half horizontally, doubling the capacity with an upper and lower level.
The two tunnels, which ran in parallel were joined at various points throughout their 427 meter length with smaller service tunnels. There was also offshoots for services such as ventilation, toilets, plant rooms and medical facilities.
As well as entry from station level, the shelter had stairwells at each end for access. Both of these access shafts surface in circular, purpose-built brick buildings. The southern access building now stands behind a row of garages in Studley Road, the northern building can be seen beside South Lambeth Road.
After the war the shelter was put to use as barracks for American troops. It's currently used as a secure document warehouse.
As it's situated between the busy Clapham Road and South Lambeth Road, the northern entrance to the shelter is a local landmark. It has now been decorate with a brightly coloured mural, incorporating the designs of pupils from a local school. A clock tower has been built near-by and the building now sits in a small grassed garden area.
Add A Comment
Tags:
undergroundlondonurbex