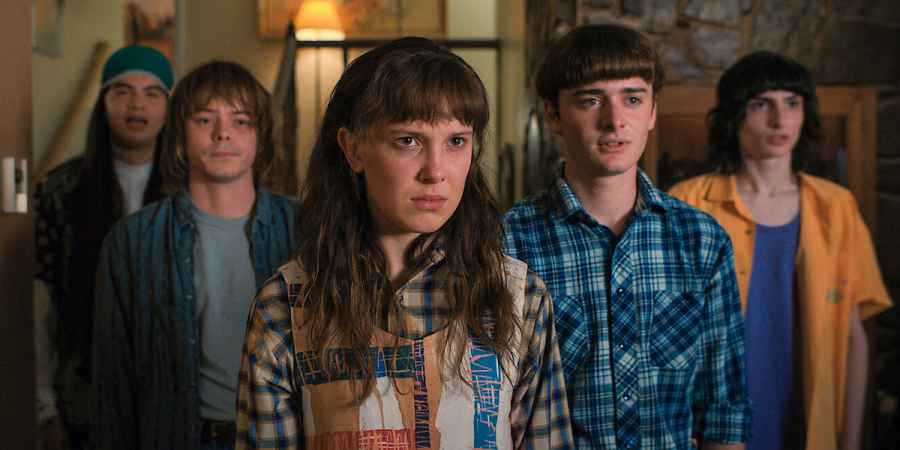 Photo: © Netflix
Have you made it to episode three of #StrangerThings 4 yet? There's nine new episodes to work through, but how much can you remember about the new season's third episode, 'The Monster & The Superhero'? Test your knowledge with this tricky Stranger Things season four trivia quiz.
Murray and Joyce fly to Alaska, and Eleven faces serious consequences. Robin and Nancy dig up dirt on Hawkins' demons. Dr. Owens delivers sobering news.

1. Whose house in Nevada is raided at the start of the episode?

2. Which word did Jonathan and Argyle get far too excited by on the drive home from Rink-O-Mania?

3. What did Murray cook Joyce and the kids for dinner?

4. What did Jonathan mistake for wine for at the dinner table with Murray?

5. What does the graffiti on the outside of Benny's Burgers say?

6. Which retro cereal did Eddie eat while hiding out in the boathouse?

7. Where was the mutilated body of Fred Benson found?

8. Which 80s comedy film does Jonathan suggest the gang go and see?

9. What were Will and Jonathan watching on television as they lazed around before the police arrived?

10. During their interrupted rehearsal, Eddie's band have a poster up on the wall for which British band?

11. What injury did Eleven leave Angela with after hitting her with the skate?

12. What does Hopper trade for help getting out of his shackles?

13. Who intercepts the police van transporting Eleven and rescues her?

14. Where do Nancy and Robin go to research Victor Creel?

15. What's the name of the publication in which Robin reads a headline about Elvis being abducted by aliens?

16. What was the slogan on the poster on Ms. Kelly's office wall?

17. Where does Lucas lead the basketball players to steer them away from Eddie?

18. What symptom is reported by the victims of Vecna before he kills them?

19. What is the slogan on Dustin baseball cap throughout this episode?

20. Who finds the Creel Clock embedded in a wall in the school at the end of the episode?