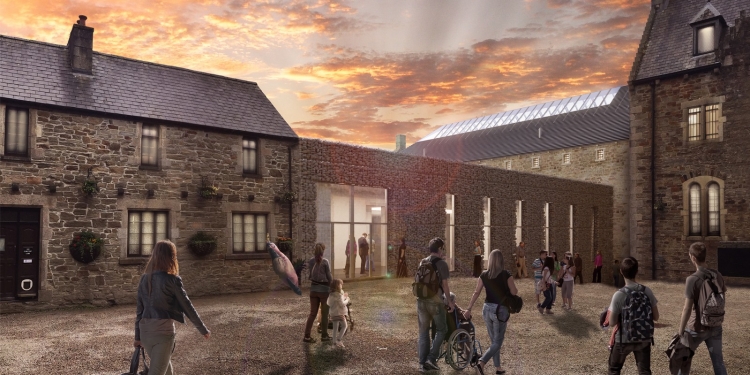 Photo: facebook.com
Bodmin's historic haunted jail will be closing its doors to visitors and temporarily suspending all ghost hunting events for six months from November.
The closure comes in to effect on 4th November as part of an on-going £40 million upgrade to the popular Cornish tourist attraction. The work will not only give the old prison given a new lease of life, but also help to preserve some of the jail's unique features and restore the important heritage site to its former glory.
Although work has been taking place at the site in the village of Bodmin for some time now, winter 2019/2020 will be the first time the jail has closed its doors to visitors. The current restaurant and gift shop will remain open for diners and pre-booked events only until 1st December 2019.
The up-coming closure is to allow for the construction of a brand new, £8.5 million attractions called Dark Walk to be completed. The new attraction is set to open when the rest of the jail re-opens on 1st May, 2020 and will give visitors the chance to take a journey through an interactive, educational, fun and punishing depiction of life in 18th and 19th century Cornwall.
Dark Walk will feature ghostly voices from Cornwall's murky past, including highway robbers, smugglers, miners and tales of the legendary Beast of Bodmin Moor. The attraction promises to be packed full of the latest technology and theatrical effects, allowing guests to experience life and death within the prison walls and Cornwall as a whole.
The attraction runs regular "After Dark Events", which allow visitors to follow in the footsteps of the countless paranormal investigators who have previously visited the jail. From November these events will be on hold until the re-opening in May.
The jail has become a popular location for ghost hunters due to its grim history as a prison for almost 150 years where over 50 public hangings were carried out. One notable group to investigate the location was Yvette Fielding and the 'Most Haunted' team, who came to Cornwall in their sixth series in 2005.

Bodmin Jail | After Dark from Panoptic Motion on Vimeo.

Even visitors in the daytime can get a taste of the jail's ghostly goings-on as there's an area dedicated to the supernatural. The 'paranormal room' gives a brief history of paranormal investigation. On display are some of the tools of the trade, including a Ouija board, several electronic ghost hunting gadgets, and on one wall, a large scrying mirror.
Visitors and staff have reported plenty of spooky happenings in the Grade II listed building. Objects are said to fly across the cells, as if thrown by unseen hands. Also murderous screams have been heard causing people to run in absolute terror. The ghostly figure of a priest has been seen in what used to be the prison's chapel.
There's one last chance to hunt spooks before the jail's temporary closure. The attraction have invited local enthusiasts to join them for a charity open day with free entry on Sunday, 3rd November in aid of Cornwall Hospice.
Once the work is complete visitors will be able to enjoy a complete overhaul of the main attraction, a brand new visitor centre, and four new linked experiences. The site will also include a new boutique hotel, which is due to open in late 2020. The four-star hotel will retain many of the jail's original features including bars on the windows.
In case you're wondering, you won't be cooped up in a tiny prison cell, each of the 70 rooms will be built within three of the existing cells in what was once the civil, naval and women's wings.
If you're in the area, we highly recommend a visit to Bodmin Jail before it closes next month, and be sure to come back and find out what the attraction has in store for visitors in 2020. You can find out more details at the attraction's official website, bodminjail.org.
Tags:
paranormalbodmin jailcornwalltopical