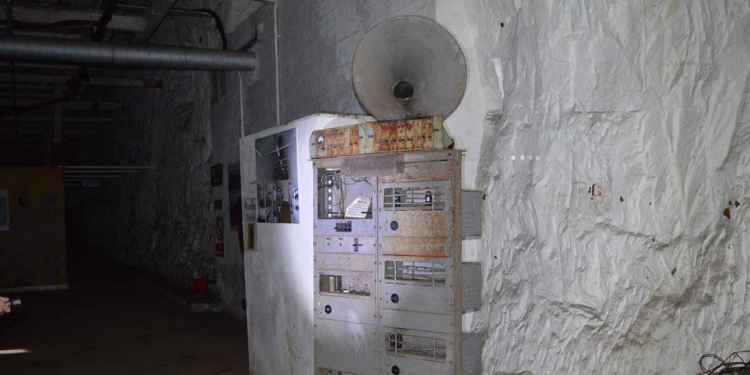 How much do you know about the eerie network of interconnecting tunnels that were carved under a sandstone hill near the town of Kidderminster?
The passageways make up a disorientating maze of 3.5 miles of tunnels, covering over 26,000 square meters and were originally excavated ito house the Drakelow Underground Dispersal Factory which was used by more than 500 employees of the Rover Motor Company to manufacture aircraft engines for the Ministry of Aircraft during the WWII.
After the war, Drakelow Depot, as it was then known, was put on standby by the Home Office as a nuclear bunker during the Cold War. The facility was kitted out with everything needed to house 325 local government officials, armed forces and heads of emergency services in the event of a nuclear strike on the United Kingdom.
According to newspaper reports at the time, at least three men were killed by a roof fall while digging out the tunnels in the 1940s, there are reports since of factory workers being killed undergrounds. So, it's no surprise that the tunnels are also said to house a plethora of ghosts, but how much do you know about the hauntings at Drakelow Tunnels? Take the test...

1. A demon guardian is said to protect the tunnels because part of them were dug out under what?

2. The site's owner, Sid Robinson, describes this demon as looking like what?

3. Through which of these means has the demon NOT made its presence known to visitors in the tunnel?

4. What is the nickname given to a ghost of a worker who died during the excavation of the tunnels when a rock fall crushed his head?

5. One ghost is said to physically push guests, who is he thought to be?

6. The ghost of a lady who is quite often seen near the entrance with a child, but how did she die?

7. The most commonly reported ghost of the tunnels is said to interact with visitors in what way?

8. One ghost is said to be accompanied by his pet dog, what was his job in the tunnels in life?

9. What happened to the current site's owner while working alone in the tunnels?

10. When television show, 'Most Haunted' visited the tunnels in 2014, what old object was thrown, hitting the show's host Yvette Fielding on the shoulder?