Most Haunted At Hill House, Part One - Series 18, Episode 6 Review 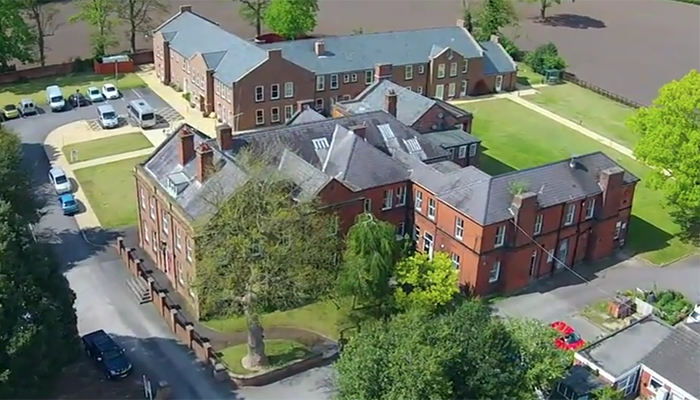 Yvette Field and the Most Haunted team embark on a two-part investigation of a large former family residence in Cheshire which now stands empty. The house is near the rural town of Sandbach. An area steeped in history with Roman settlements and medieval battles in years gone by.
The house itself dates back to the 17th century and was a family home until 1960 when it was purchased by a charity and became the Leonard Cheshire Home. It's been used as a care facility for elderly until it recently closed, having become superseded by a newer purpose-built facility next door. It is now vacant, but reputedly haunted by the ghosts of former residents. 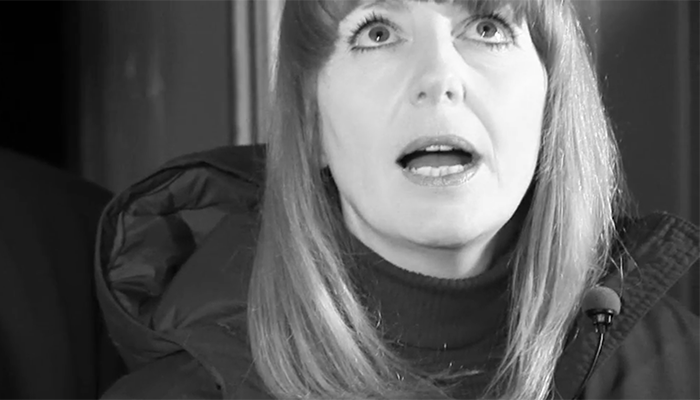 It is said that the corridors of this mammoth property echo with the voices of the long dead. People have reported hearing moaning, whispering voices, shouts, cries for help, and the sound of children running and playing.
People have also experienced icy blasts of cold air, doors slamming on their own, and have seen the elaborate light fittings throughout the house swinging on their own. Eye witnesses have feeling uneasy in certain parts of the house, a feeling like they're being watched.
It is rumoured that someone once hanged themselves on the upper landing. Their true identity is not known, some people think it could be a butler, while others says it's the spirit of a pregnant woman.
The show's demonologist Fred Batt is excited about the opportunity to investigate the house, "this is the first time it's been investigated, we've been given full access to this place. And already since being here things have happened, we've seen a chandelier moving and someone running away from it, we've seen dark shadows."
However, resident skeptic Glen Hunt thinks there might be a rational explanation for some of the activity in the house, "let's not forget, we're right next to a very very busy road, it's a main arterial road between towns and villages here." Glen said it's not hard to imagine how heavy traffic, especially farm machinery could affect the fittings in the house. 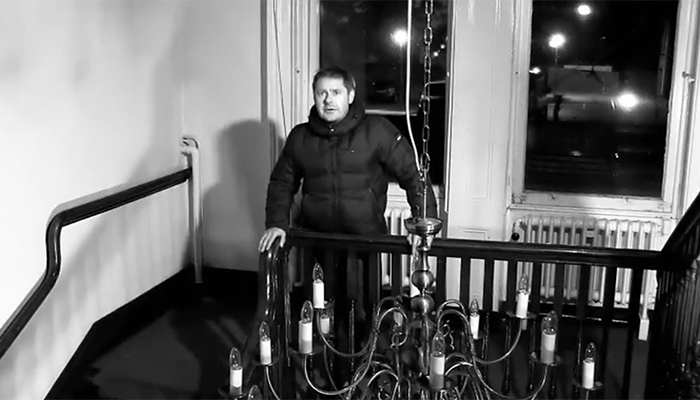 Before the lights even went out for the investigation one of the crew saw something odd on the stairs. Camera man Gregg Smith asked, "where's Eamonn, is he upstairs?" Karl Beattie answered from behind the camera confirming that team member Eamonn Vann-Harris was upstairs. Gregg then asked, "so who did I just see walk across here?"
Apparently Gregg was stood halfway up the stairs and he saw a shadow going across the bottom of the stairs, despite the fact that Karl said "everyone is accounted for."
Gregg said he also saw something while filming earlier in the day, "I saw a figure or a shadow or something grab this chandelier and pull it and start it rocking. I thought it was one of the crew messing about so I raced up here," he could see no one at the top of the stairs.
Gregg described the figure he saw as being dark and without colour, and said there wasn't a light source that could have created a shadow in the location he'd seen it.

While Yvette was filming her walk around on the first floor with Glen and Fred, it was Glen who then saw something odd. The corridor is known to have a negative atmosphere and is right near the location where the unconfirmed hanging took place.
After hearing some tapping Yvette was calling out to the spirits, "hello, how many of you are there watching us right now?" There were four taps in response. Yvette then asked, "are you happy for us to be here? two for yes, one for no," but there were six taps.
Karl speculated that as there are four of them they might all have different answers, but they didn't get to test this theory because Glen suddenly looked very concerned. Confused he said, "Gregg, you're here, I just realised. Before we came through that door, I actually saw someone go into that room, I just assumed it was you but I actually saw a physical person."
Gregg said he hadn't even been in that room, but the attention then moved to Karl who was holding the camera and said he felt someone push his back, hard with a thud, "I've been touched, but I've never been pushed that hard." 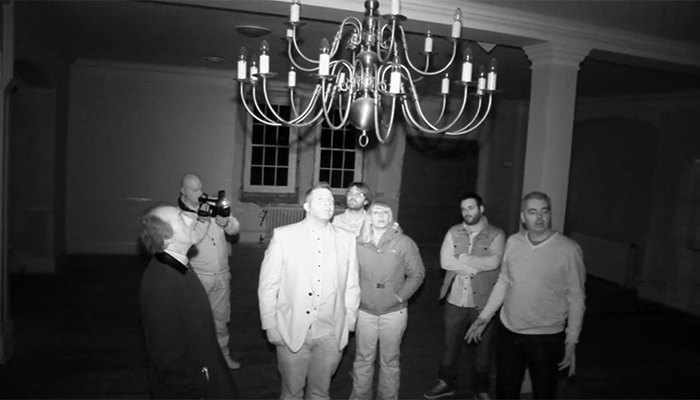 The team then gathered downstairs under the chandelier which has previously been seen swinging, the team were willing the light fixture to move once again. After hearing a distant bang, Yvette started calling out to the spirits, "do you know of anybody who hanged themselves here?" The spirits tapped twice to indicate, "yes."
Yvette then asked, "was the person that hanged themselves, were they male? two for yes, one for no." The tapping seemed to suggest "no," so Yvette asked, "were they female?" And again the spirits said "no." Karl asked, "were there two people who hanged themselves here?" The spirits said "yes," and then through tapping they indicated that one victim was female and the other is male. 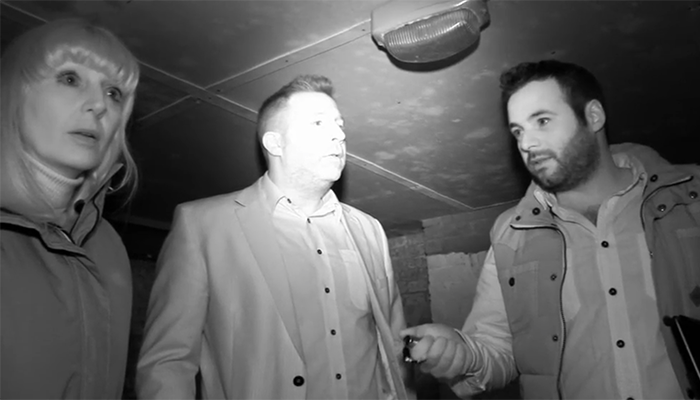 The team split up, Yvette, Karl, Glen and Eamonn went down to the cellar, where straight away, Karl heard what he said sounded like children singing.
Eamonn then set up his laptop in an attempt to capture some the audio of spirit voices, known as EVPs. When they reviewed the recording, Yvette could be heard saying "if there's someone here, please can you make a noise," this was followed by a noise which sounded a bit like the word "yes."
Further into the recording another sound could be heard which sounded like "I'm alive" if you use your imagination. Yvette was impressed, "oh my god, that's so good." The was followed by another EVP which seemed to say "this is Rachel." 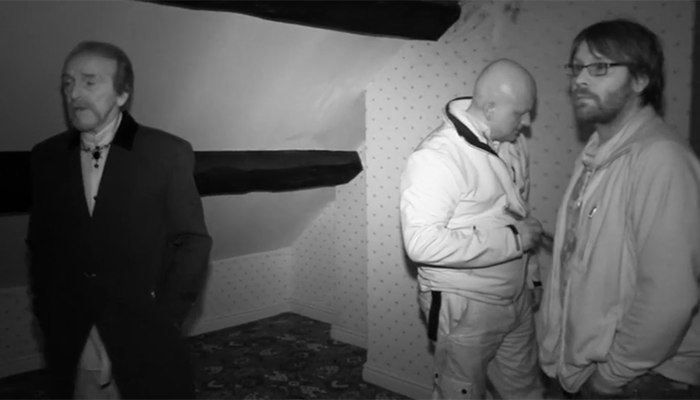 Meanwhile Gregg was in the attic with camera man Stuart Torevell and sound guy Darren Hutchinson, where Fred was calling out to the spirits, "if there's anybody here, can you let us know you're here, touch one of us, make a noise."
There wasn't much paranormal activity in the attic so they went downstairs via a spiral staircase. As they descended the stairs, they heard a bang. Stuart found something on the floor below, it turned out to be a piece of charcoal. They then reporter smelling a floral scent and moment later Darren walked through a door to find a chandelier swinging. 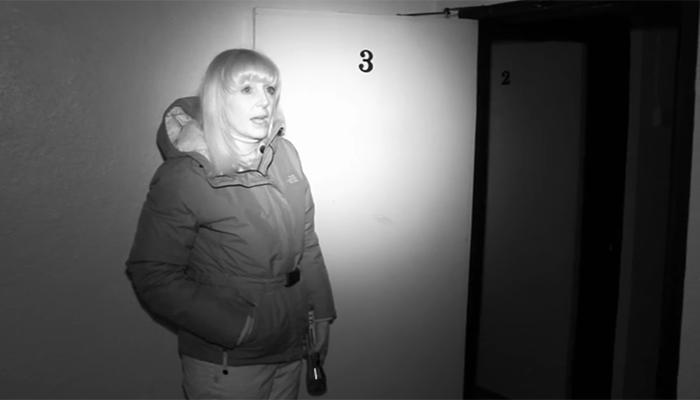 The teams then swapped around, Karl, Fred, Darren, and Stuart went to the upper corridors where Karl started an experiment with four balls placed on the floor.
While Yvette, Glen, Gregg, and Eamonn went to the attic where Yvette was experimenting with a ball too, "I'm going to roll a ball on the floor, if you could roll it back that would be brilliant."
Eamonn then pulled out his laptop again to try and capture some more EVPs, they thought it said "Rachel" again. They then heard what Yvette described as "soft thuds" coming from the hallway.
The episode ended with a loud bang and a promise of more to come next week in the second part of the investigation.
The new series of Most Haunted continues on Really. Watch on Freeview (17), Sky (155) and Virgin Media (129), or watch previous episodes of Most Haunted on demand on the UKTV Player.

For reviews of all of the new episodes, plus highlights and evidence from the shows, and to find out when Most Haunted is on next, visit the Most Haunted episode guide.
»Hill House Part 2 (Episode 7)