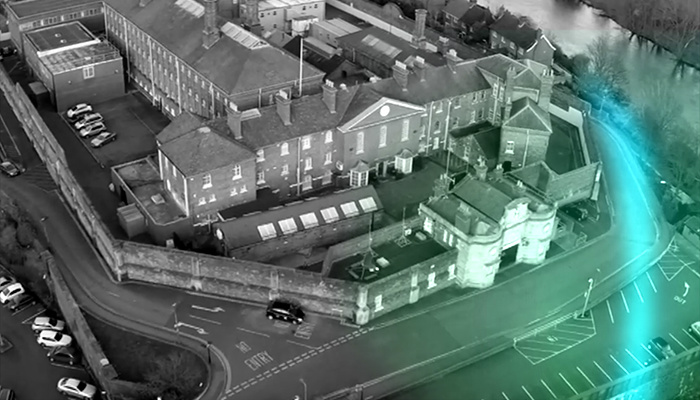 The Most Haunted team, lead by Yvette Fielding continue their paranormal investigation of Shrewsbury's disused prison in. A building which dates back to 1877 and had seen its fair share of deaths.
This is the third part of a mammoth three-part investigation, which has already proved to be one of the most terrifying the team have ever embarked on. In the second part an EVP experiment gave up the name of a spirit, something seemed to be stalking Karl Beattie, and skeptical Glen Hunt had his beliefs challenged he heard strange noises and saw unexplained light anomalies. 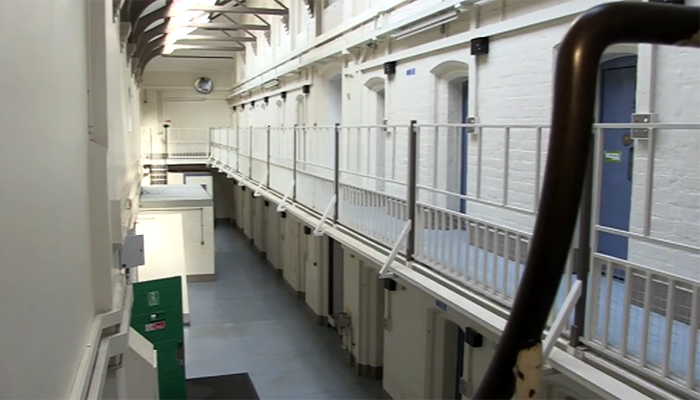 This time the team are in the part of the prison where the majority of its ghost stories have been reported, C-Wing. Although there are only a limited number of cells on C-Wing, it is one of the most active places in the prison. This part of the prison was originally built as housed female convicts until 1922, after which it housed vulnerable prisoners who needed protection from the rest of the inmates.
When the prison was in operation, some officers refused to work in this part of the prison alone at night, they've reported being pushed down stairs, hearing doors slamming, noises like moving all around them, and footsteps. It's said the atmosphere can change in the blink of an eye.
It is believed that one of the female prisoners has refused to leave, she has been seen dressed in a grey uniform many times walking the upper levels. She walks from cell 3 toward the execution room. 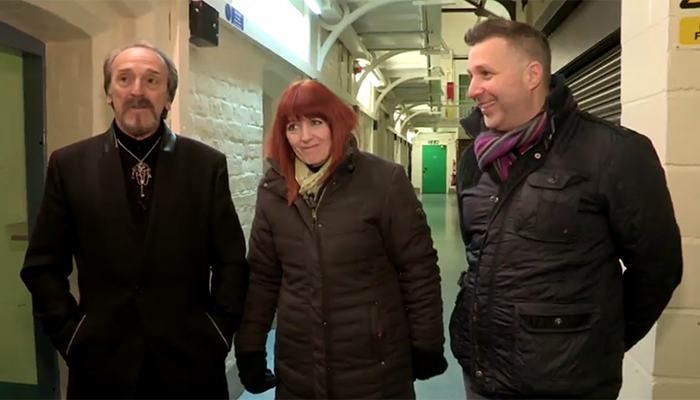 Glen thinks this figure could be a reflection of the past, "obviously as a skeptic, you're always wondering what these things really are, and I buy in to this idea that when you hear a ghost or see a ghost, it's a recording potentially."
Yvette wasn't looking forward to the last part of their vigil, "there's something about this place and I'm actually really quite frightened about being here tonight and when all the lights go off."
The show's demonologist Fred Batt jumped in, "it's probably because people were killed here. They didn't die here, they were killed here, by a rope."
Yvette asked Fred if he thinks there's a darkness in C-Wing, he said "what I can feel is what's coming up from the Georgian part underneath and then underneath that it was the grounds to the castle next door, so you've got witchcraft, demonology, going back to 1500s, 1400s, and further back."
Apparently, there's even rumours of prisoners performing witchcraft in the old Georgian prison. 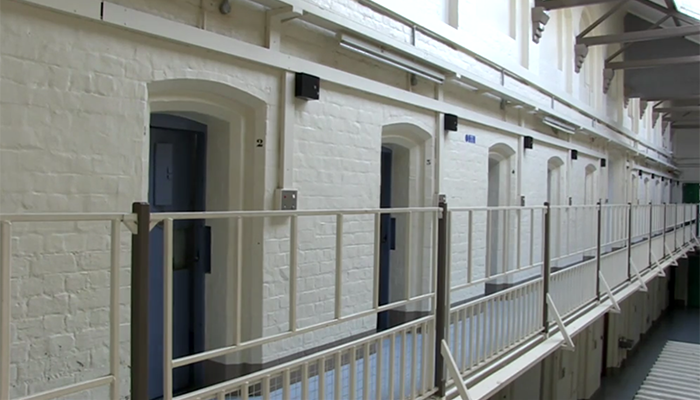 Like in other destinations the Most Haunted team have visited, they set up locked of cameras. These cameras has already caught movement in the previous episode, and this time round they didn't disappoint. Although their hopes were high for the notorious cell 3, it was cell 2 that appeared to be most active. The cell's door was caught repeatedly slamming on camera. 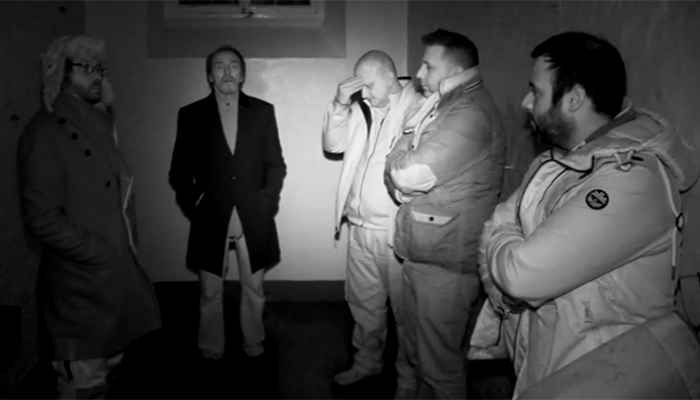 Glen headed to the upper levels with Stuart Torevell, Fred Batt, Eamonn Van-Harris, Gregg Smith, and Darren Hutchinson. Stuart started off by trying to contact the Grey Lady by calling out to the spirits, "is it possible you could touch one of us in this cell? Harm one of us?"
After a while, they saw an odd sustained light on the wall. The team were quite impressed by this unexplained light anomaly which they described as "like an orb but brighter and bigger." They said it was a round light with other lights around it that was moving around slightly on the wall. It remained visible for several seconds, however it wasn't caught on camera. 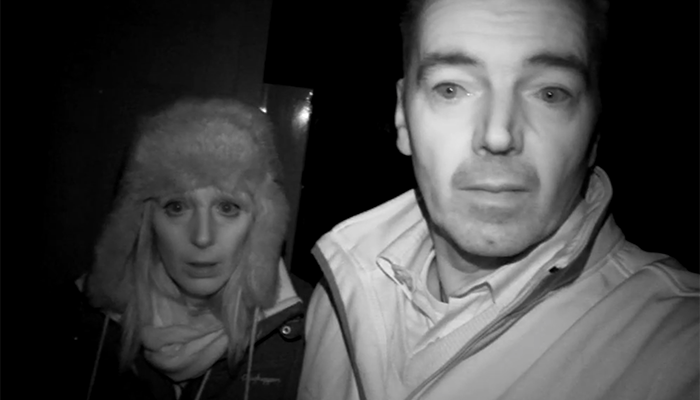 Yvette stupidly agreed to go to the kitchen with hubby Karl. She was already terrified and apologised for squeezing his hand too tightly.
Karl suggested they go inside one of the kitchen's walk-in freezers, Yvette had other ideas, "no!" she said. But Karl said, "what could possibly go wrong?" Yvette protested, "I'm not going in there. No way am I going in there."
Karl then ran off in the direction of the open freezer door, knowing that Yvette wouldn't want to be left alone and would follow him. His plan worked and seconds later Karl and a very angry and scared Yvette were stood in the disused freezer.
To make things worse, Karl then asked out to the spirits, "if you're here shut the door." Yvette instantly put her foot in the path of the door in case the spirits did oblige. Karl said, "I don't think I've seen you this scared in a long time."
Leaving the freezer, Karl took Yvette into an area they'd not been to before, where to Yvette's horror, they found another cold room. Karl opened door and Yvette screamed and ran after seeing "dead bodies" hanging from the ceiling. Karl wasn't far behind her.
Yvette had had enough, "you're going to take me out now," she demanded. To make things worse, during her panic a bobble from her own hat swung up and hit her in the face, scaring her even more. They ran back to the main part of C-Wing. Yvette was fuming and pushed Karl away as soon as they reached the others, who were up on the top level. 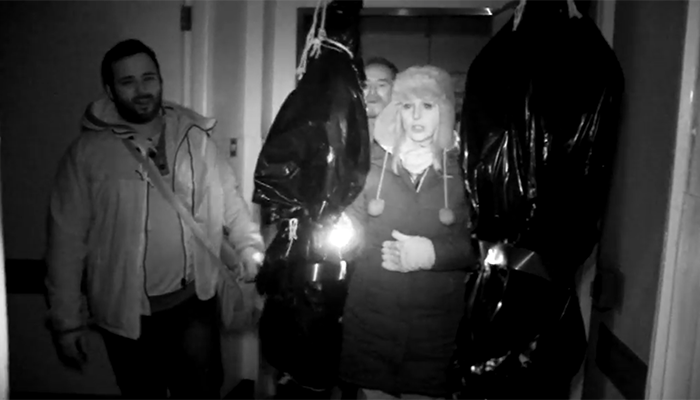 After the incident Yvette refused to go back with Karl alone, "no, I don't wanna go, stop. Stop making me go place I don't want to go, what's wrong with you?" Yvette shouted up to the others and made them come along.
It turns out the hanging bodies were nothing more than dummy items, presumably replicating meat that would have been hanging in the fridge. 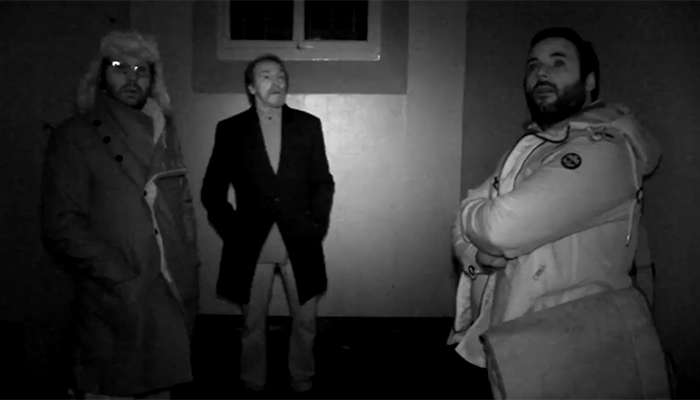 Darren, Fred, Eamonn, Gregg then headed back to the lower level of C-Wing where they saw another "strange light anomaly" above Fred's head. The odd light came as they heard a bang, and oddly at the same moment the camera went out of focus and the flashing light could be seen behind Fred's head for a couple of seconds. 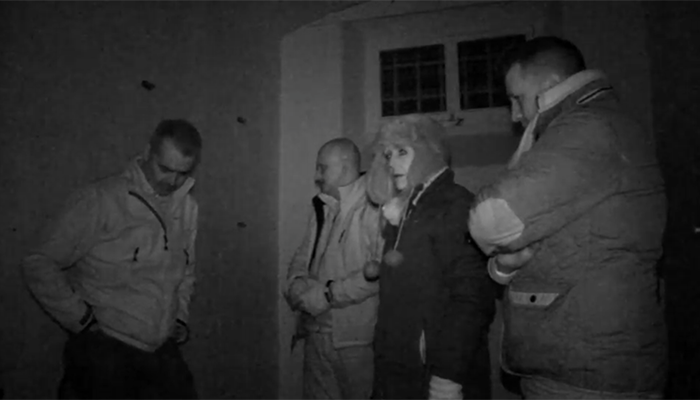 Meanwhile, Yvette, Karl, Glen and Stuart were in cell 3 and straight away heard a bang on the door. Yvette asked "is there a lady here?" And seconds later something blew in Karl's ear, which he described as "icy cold" breath.
They then saw what looked unmistakably like a torch shining under the cell door, they ran out to find no one there.
With this the mammoth three-part investigation came to an end, an investigation which Yvette described as "one of the most haunted locations we've been to."
For reviews of all of the new episodes, plus highlights and evidence from the shows, and to find out when Most Haunted is on next, visit the Most Haunted episode guide.
»HMP Shrewsbury Part 1 (Episode 8)
»HMP Shrewsbury Part 2 (Episode 9)