This article is more than six years old and was last updated in February 2020.

This week the internet has been asking "is it real?" after photos and video of a dead mermaid washed up on a beach in the UK emerged. 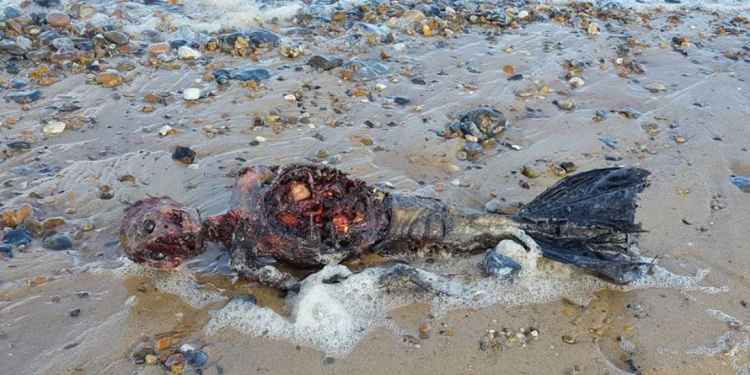 Photo: facebook.com
As a child, my first crush was Ariel the Little Mermaid, so I was pretty devastated this week when photos surfaced of a real life mermaid. Forget flowing red hair and sea shell boobies, the mermaid depicted, which was washed up on a British beach, makes Ursula look hot!
The gruesome mermaid has been photographed led on a beach in Great Yarmouth in the UK, where it was supposedly washed up by the harsh North Sea.
The photos were posted on Facebook by Paul Jones and appear to show the decomposing corps of human-like mermaid complete with a tail fin.
The photos have been viewed over 10,000 times and many who have shared the images seem convinced that this is in fact the genuine remains of mer-folk, but not everyone is convinced. Others have been speculating that this could be nothing more than the rotting body of a seal or another sea creature.
It'll probably come as no surprise that in the past, the world's top ocean scientists from National Oceanic and Atmospheric Administration (NOAA) have never found proof of the existence of mermaids, despite looking for evidence of "aquatic humanoids," as they call them.
Sadly, it seems NOAA are right, these recent photographs do very little to help explain the myth of mermaids. This particular mermaid's origin is rooted on land. Paul Jones, who posted the photos is actually a pretty skilled model maker, who's known for making some creepy creations and it seems that mermaids are the theme for Halloween 2016.
Tags:
mermaidcreatures