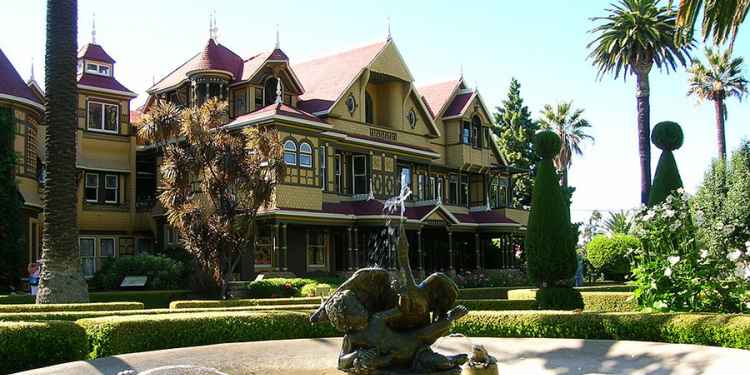 Photo: © Roxanna Salceda
Since Yvette Fielding and her team of ghost hunters first appeared on our televisions in 2002, they've visited hundreds of haunted locations around the UK, but their investigations have also taken them to 18 locations overseas.
Most of these international trips were in the United States, the team filmed the whole of series 13 across the Atlantic in 2008. They also visited the Netherlands and Transylvania.
The team also headed overseas for three 'Most Haunted Live!' shows, which included Transylvania, where the team were on the trail of Dracula for three nights. As well as five nights in Turin, Italy and a 2010 live show in Prague in the Czech Republic.
Three special live events were aired live in the US only, a two-hour edited version of the events were shown in the UK. They were filmed at Eastern State Penitentiary in Philadelphia, the Winchester Mystery House in California, and Gettysburg, Pennsylvania.
The team haven't taken the show overseas since the end of the USA series, below is a complete list of every international location that the team have visited up to that point.

12 Jul 2005
Yvette Fielding and the team cross the Atlantic to investigate spooky goings-on at Whaley House in San Diego, believed to be America's most haunted building.

26 Jul 2005
Part two of two. The team continue their investigation on the scary cruiseliner the Queen Mary and find that victims of the ship's past still roam its decks.

20 Sep 2005
Yvette Fielding and a team of investigators search for paranormal activity at the American Legion in Hollywood, formerly a favourite venue for movie stars and military personnel. Psychic Derek Acorah attempts to get in touch with an old custodian, who died in the building.

27 Sep 2005
Yvette Fielding, Derek Acorah and the team visit the Leonis Adobe in California, an old ranch house believed to be one of the most haunted sites in LA.

04 Oct 2005
Yvette Fielding and the team visit spooky Drum Barracks in California to investigate reports of ghostly goings-on in the Civil War museum.

WATCH: Amazon Prime
04 Apr 2007
Part one of two. Yvette Fielding begin a 2007 investigation at the Transylvanian home of the notorious Vlad 'The Impaler' Tepes, the man on whom the legend of Dracula was based. Originally broadcast live from Corvin's Castle, the boyhood home of Vlad Tepes, the first night of the ghost-hunt sees the team searching the Transylvanian Room, Desert Tower and the Hanging Gallery.

WATCH: Amazon Prime • YouTube
10 Apr 2007
Part two of two. In Rasnov Citadel in Romania, Yvette takes a frightening trip 210 feet to the bottom of a disused well and finds clues pointing to an untimely death.

WATCH: Amazon Prime • YouTube
11 Nov 2008
Yvette Fielding and the team visit the Stanley Hotel in Colorado, which inspired horror author Stephen King's novel The Shining and has a sinister reputation.

WATCH: Amazon Prime
25 Nov 2008
Yvette Fielding and the team of investigators visit the Waverly Hills Sanatorium in Kentucky, a site with such an imposing reputastion they are initially too scared to walk around.

WATCH: Amazon Prime • YouTube
09 Dec 2008
Yvette Fielding and the team visit the West Virginia State Penitentiary, a site with a dark history and the subject of a number of sinister stories involving violent inmates.

WATCH: Amazon Prime • YouTube
23 Dec 2008
The Most Haunted team heads down to the cemetery and sets up camp at the location of the infamous wooden bridge; it is said that one can hear the hooves of the famous horseman galloping across it in the dead of night.

WATCH: Amazon Prime • YouTube
20 Jan 2009
Yvette Fielding and the team hunt for ghosts at Fort Delaware, a former prison that housed thousands of inmates, and record a sample of possible Electronic Voice Phenomena.

WATCH: Amazon Prime • YouTube
03 Feb 2009
Yvette Fielding and the team of investigators visit a New Jersey mansion that now operates as a bed and breakfast, in search of paranormal activity.

WATCH: Amazon Prime • YouTube
03 Mar 2009
Yvette Fielding and the team visit the Conference House on Staten Island, New York, and the mansion provides a number of shocks during the course of their investigation.

23-25 Feb 2007 • 3 Nights • The Best Of Most Haunted Live: Volume 6
Broadcast live from Romania, Most Haunted Live's first overseas events sends the team on tje hunt for the ghost of Vlad The Impaler, the person on whom the legend of Dracula was based. The team are based in the Transylvanian Corvin's Castle, the childhood home of Vlad.
Corvin Castle, Transylvania

Most Haunted Live! A Living Hell On Earth

Most Haunted Live! The House That Fear Built

19 Oct 2007 • 1 Night • The House That Fear Built
Yvette Fielding and her adventurous investigation team delve into the deep secrets of the Winchester Mystery House in San Jose, USA, in this adventure. The architecturally fascinating Victorian Mansion was once the home of wealthy widow Sarah Winchester, and was purposely designed by her to house unfortunate ghostly souls.
Winchester Mystery House, California

10 Oct 2008 • 1 Night • Not available on DVD
Yvette Fielding and the team treat US fan to an extraordinarily special Most Haunted Live. For the very first time, the team investigated a fascinating piece of American history, the Battle of Gettysburg. The show was broadcast for seven hours from this incredible town in Pennsylvania.
Gettysburg, Pennsylvania

25-28 Mar 2010 • 4 Nights • Not available on DVD
Yvette Fielding and the Most Haunted team spend four night in the Czech Republic town of Prague. The event starts with an investigation at the Old Town Hall, which was built in 1338 as part of the agreement with King John of Luxemburg for them to have a town council.
Old Town Hall Cellars, Prague
Prague Waterworks, Prague
Krivoklat Castle, Prague
Houska Castle, Prague