This article is more than ten years old and was last updated in July 2018. 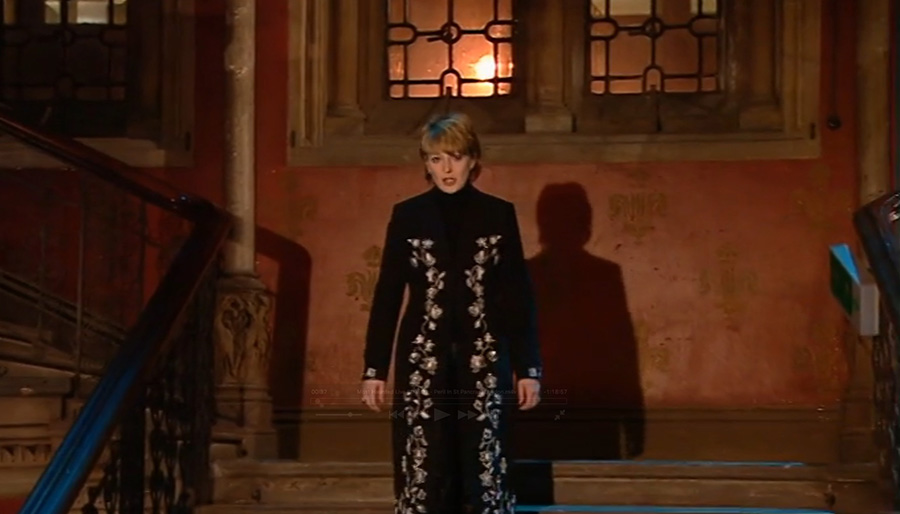 Most Haunted returns with a special, live and interactive April Fool's Day investigation of the magnificent Midland Grand Hotel. This Victorian Gothic gem beside London's St. Pancras railway station has stood empty for decades, but tonight Yvette Fielding and the team will reopen it to start a paranormal investigation.
Yvette welcomes us to the show from the hotel's grand old staircase, where she's hands over to the live show's studio presenter, David Bull, who tells us a little more about the hotel's haunted history.

Is The Midland Grand Hotel Haunted? 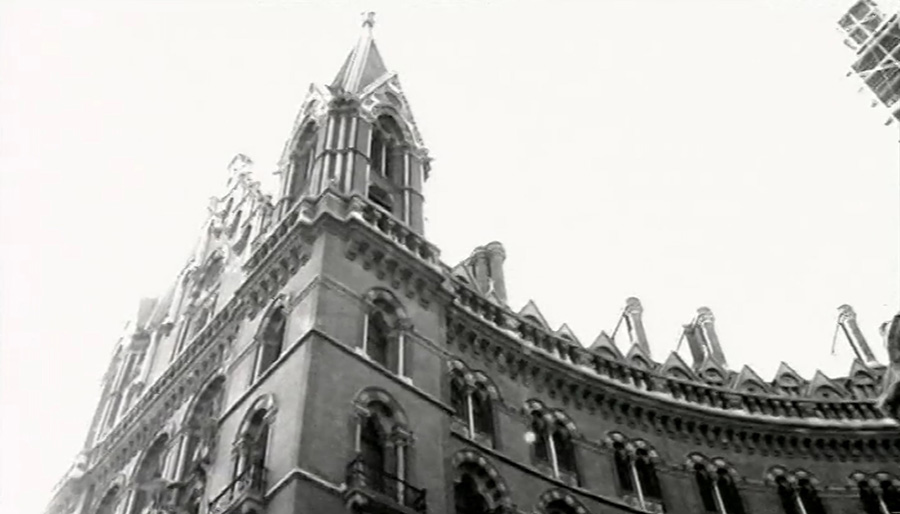 George Gilbert Scott had a vision to build an exclusive residence that would tower above the capital, brimming with opulence and luxury. It was house esteemed social gathering and affluent guests, wowing them with its lavish interior and sweeping staircases. This would be a prestigious sanctuary for the wealth elite.
In 1865 and competition to design the new next to the station was launched, and out of 11 architect, Scott's design was chosen. He'd submitted a grand plan, considerably larger than the original specifications, with more than 300 bedrooms. Sadly, the hotel was ill-fated from the start, the sumptuous decor, expensive tariff and outdated facilities eventually lead to its closure in 1925 and after a brief life as offices, the hotel gasped last breath in 1960s, remaining abandoned and derelict to this present day.
Its curved red brick walls and menacing towers still remain a space of mystery and intrigue. The hotel is built on the site of a Roman settlement and the basement sits on what was believed to be a medieval graveyard, staff have reported hearing the footfall of marching Roman soldiers and some have even seen apparitions of long-dead soldiers.
Room 10 is said to be one of the most haunted part of the hotel. It's served by its own staircase and it's on these stairs that a mysterious man has been seen walking towards the room, but when followed he vanishes through the door into room 10, the same door that opens on its own.
On the east stairwell a young maid is said to have plunged to her death while serving at the hotel. It's not known if she fell or if she was pushed. Ever since the ghost of a girl has been seen floating on the stairs. 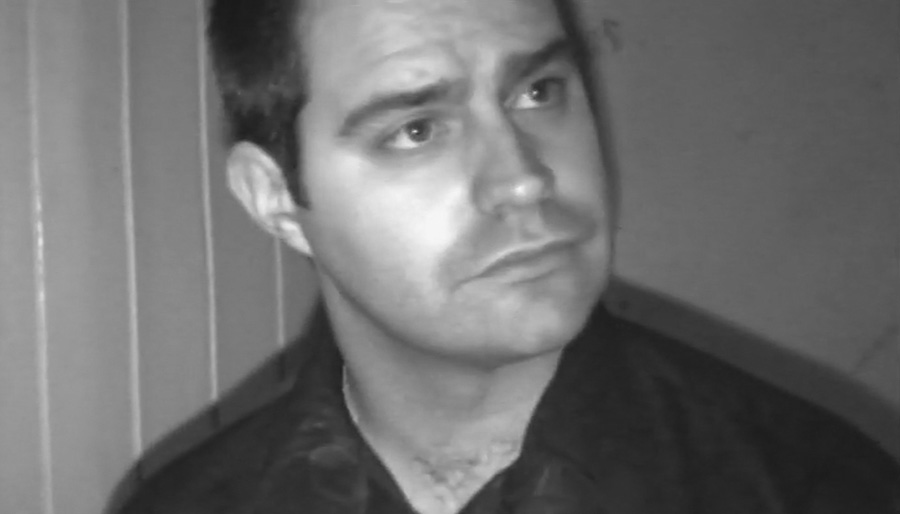 The show's resident paranormal investigator, Phil Whyman has been studying the hotel. He's already carried out his baseline experiments in preparation for medium Derek Acorah's arrival, he said "well the experiments we're going to be doing to day consist of an EMF meter, which basically detects fluctuations in the electromagnetic field. We're also doing a trigger object, which is basically where we draw around an object on a sheet of paper, lock the area off so nobody can get into the area, and check back periodically to see if that object has actually been moved by some spiritual entity. We're also going to be doing a temperature gauge, which gives us a basic mean temperature for rooms that we're going to be doing the experiments in."
Back in the studio, David Bull introduces Derek and before the medium even finished saying hello, he was overcome by the presence of the spirit of a man, who Derek said drowned in water. He also felt the energy of a lady, he said "these people lost their lives in this building going back in time, and collectively they lost their lives around the same time. I don't know how at the moment." 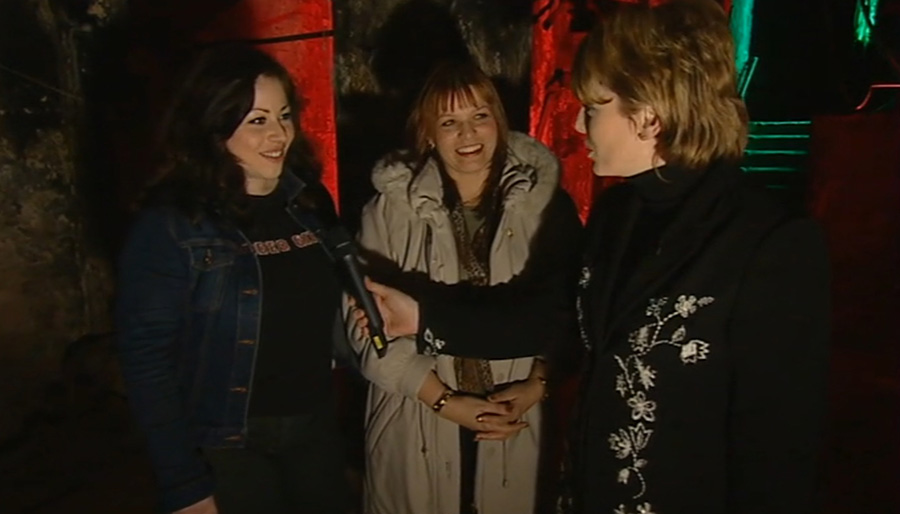 In previous Most Haunted Lives, viewers have been asked to phone in and suggest which part of the location Yvette, Derek and the team should investigate, but this time they've done things a little differently. Six fans were let loose with camcorders in the hotel to determine which areas were the most paranormally active.
The first location that they sent Yvette to was the opium den, a dark space nestled within the depths of the basement. Yvette met two of the fans, Jacky Newcomb and Sarah-Jane Greenway, in the very well lit and atmospherically basement. After a quick chat, Derek arrived.
He said he'd followed the man who he'd picked up on earlier drowning. Derek confirmed that he died by drowning and said that in this area the man would have been working, he said "you put something in and it goes up." Back in the studio, the show's historian, Richard Felix, confirmed that the room they were in would have once been a large dumb waiter and food from the kitchens in the basement would have been loaded into it.
Richard also confirmed that a member of staff did drown in the hotel, he said, "on the very very top of the building was a very large water tank, the staff used to go up there, they used to sunbath on the roof and they used to use the water tank for swimming in and unfortunately one of the staff drowned in the water tank."
After this the lights were turned out and the investigation continued with the night vision cameras, and Derek was able to find out a little more about the man who drowned. Derek suddenly named is has a servant called Edward Larkin. He then moved onto the energy of Catherine who was a maid at the hotel and knew Edward. Derek said that Catherine drowned in the same way, although Richard couldn't confirm this. However he did confirm that there is supposed to be the ghost of a maid. 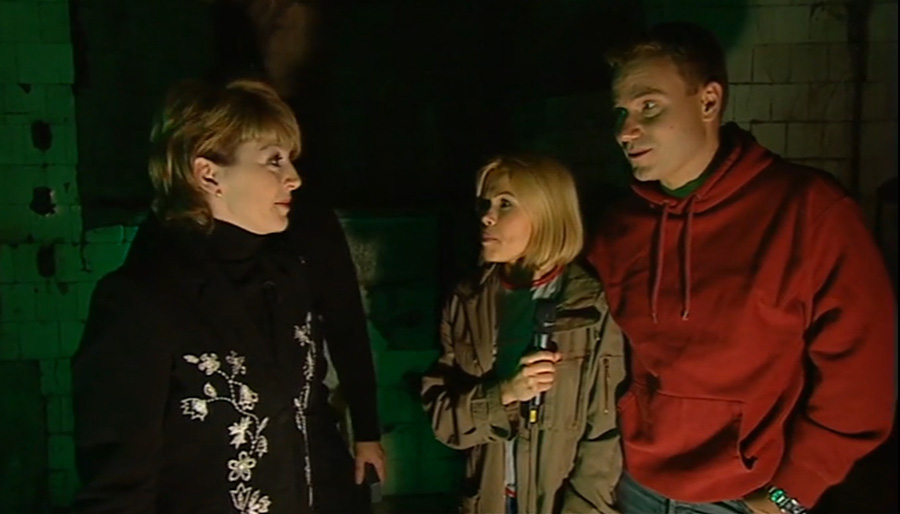 A network of dark and damp tunnels which once housed the hotel's kitchens is the next paranormal hotspot that has been picked for Yvette. This area of the hotel is said to be haunted by the ghosts of Roman soldiers who have been seen and heard marching through the tunnels.
Yvette is joined in the freezing cold basement by two celebrity fans of the show, Melinda Messenger and Richard Arnold. With the lights turned out they started investigating, Melinda was terrified from the offset and said she was experiencing an oppressive headache that started as soon as she walked down into the basement.
Yvette put the celebrity pair in a corner to see if they'd experience anything. Meanwhile, Derek came to join them in the basement to see if he could pick anything up. It wasn't long before her mentioned a burial site and picked up on the disturbed spirits who were buried here, identifying them as Roman soldiers.
Derek also mentioned newer disturbed graves, Richard confirmed that this was once the location of part of St. Pancras Church's graveyard. The church is situated across the road from the hotel and during the construction of the railway the bodies were accidentally unearthed and had to be relocated. 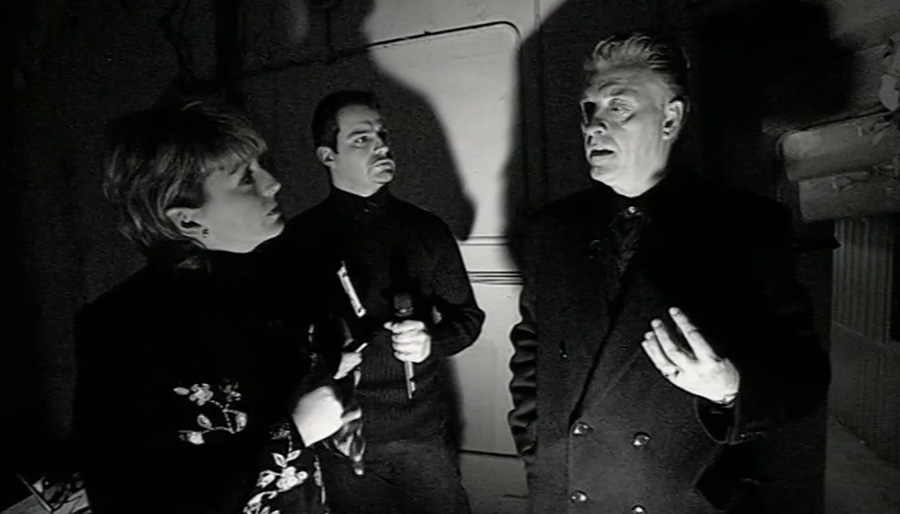 In this room, which is said to be the most haunted in the hotel, Derek picked up on the spirit of a man who he claims died in his 40s and was called W. Scott. In the studio, Richard was very excited by this, as Richard said architect George Gilbert Scott's grandson died in the hotel. This would explain why Derek said he was a proud man, as he'd be proud that his grandfather designed the hotel.
During their time in this room, Yvette felt something touch her hip, Yvette swore it was Phil but he says he didn't and Derek said he didn't see Phil touch her. Derek said it could have been the spirit of Scott making himself known. 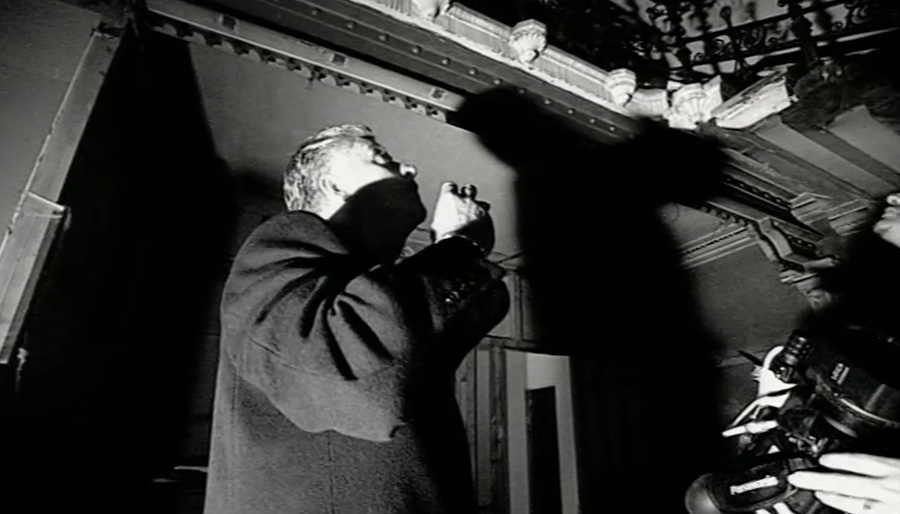 In the team's next location Derek picked up on the spirit of the maid who is said to haunt the staircase in the east wing of the Grand Midland. Although her ghost has been seen on many occasions, it's not been known whether she was in fact the girl who plunged to her death on the stairs, it was also unclear whether it was an accident or if she was pushed.
Derek named the spirit as Elizabeth Brownlow and said that she took her own life on the stairwell. He said she jumped from the fourth floor and died instantly on the hard floor at the bottom. Derek said that she took her life after falling pregnant at just 19 years to an older man who was in another marriage and wouldn't commit to her and her baby.
Yvette, looking down from the fourth floor said, "I have to say, this is a really horrible place, this is a really freaky place, it's not nice at all." 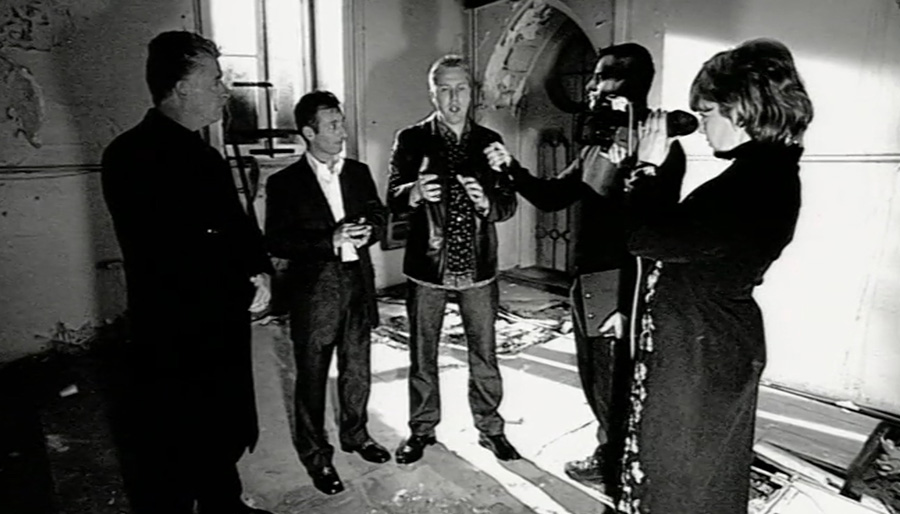 For the final vigil of the evening, the team return to room 10. This is the room where most viewers have reported seeing or feeling something odd during the show. It was also the location suggested to return to by Living TV's celebrity psychic, Tony Stockwell, from 'Street Psychic'. Tony joined Yvette, Derek and Phil in room 10, along with fellow celeb medium, Colin Fry.
The inclusion of Tony Stockwell and Colin Fry was a bit odd. It was glaringly obvious that Most Haunted were asked to included them to raise their profiles as they also have shows on Living TV, but on the final vigil the pair just tried to out do Derek by talking about what they could feel in the room.
After Tony and Colin's five minutes of fame, the live show came to an end. Yvette and Derek joined David in the studio to recap the night. Yvette said, "I've had a very interesting one [night], I always love working with Derek and it's always a surprise to me every time he comes out with some information. And, of course, we find it to be correct or nearly correct, which I find brilliant."
This third Most Haunted Live! was another great bit of live television and brought the network its highest viewing figures to date. The location the team were investigating was really interesting, but didn't have as much history as the castles the team visited in the first two live shows. As a viewer, I thought the show was a little slower in terms of the activity and Yvette seemed to agree. She told David, "I was slightly disappointing, I would have hoped for some more activity, especially down in the basement level."
Richard, quoting Longfellow, shared his thoughts on the night, "it's an excellent place. Of course it's haunted, all house wherein men have lived and died are haunted houses."
For reviews of all of the new episodes, plus highlights and evidence from the shows, and to find out when Most Haunted is on next, visit the Most Haunted episode guide.