'Most Haunted Live! The Trail Of The Witchfinder General 2004 Review

This article is more than ten years old and was last updated in September 2018. 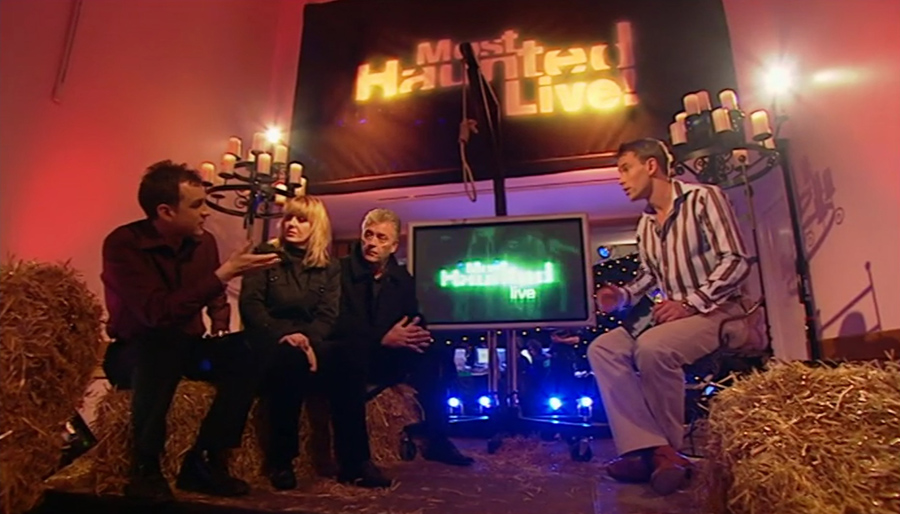 Yvette Fielding welcomes us to a three-night long live ghost hunt in Essex where her and the rest of the Most Haunted are of the hunt of the ghost of the East Anglian witch trials over the Easter bank holiday weekend.
As always, the broadcast started with an introduction from David Bull, who will be the host of proceedings across the three night. He's based in the the hub, which this time round is in Ogilvie Hall in the sleepy Essex town of Lawford. David is joined by a live audience of hundreds of Most Haunted fans, as well as parapsychologist Matthew Smith and historians Richard Felix and Richard Jones.
Throughout the live broadcast, Yvette and the team hope to cover the ghostly past of Matthew Hopkins, also known as "The Witchfinder General".

The Trail Of Matthew Hopkins 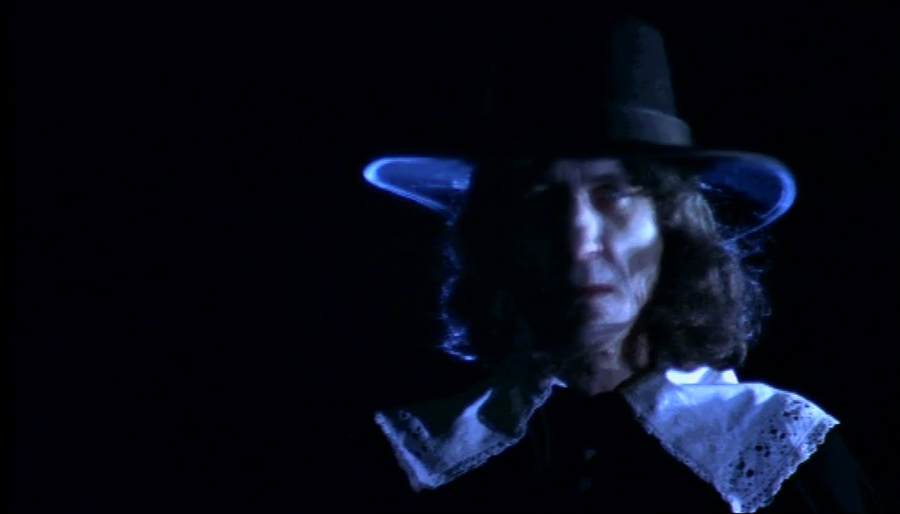 In the late 16th and early 17th centuries a terrible scourge swept through England, men and women throughout the country were tried and put to death on the grounds of suspected Devil worship and witchcraft. Self-appointed Withchfinder General, Matthew Hopkins is perhaps the most notorious name associated with these sinister crimes.
Born in the 1620s in Lt. Wenham, Suffolk, Hopkins was the son of a puritan minister. After failing to make his name as a lawyer, he moved to Manningtree where he pursued a lucrative career in witch hunting. His first victim, a one-legged, toothless woman by the name of Elizabeth Clarke was hanged in the area.
During his reign of terror between 1644 and 1646, Hopkins was responsible for the persecution and execution of more than 230 alleged witches throughout the Norfolk, Suffolk and Essex countryside.
Extreme sleep deprivation, severe beating and starvation were used to extract confessions, before Hopkins sliced his victims in an attempt to prove that witches didn't bleed. His favourite torture was infamous swimming test. If the accused sank they were innocent, if they floated they were found guilty and hanged by the neck until dead.
Hopkins died 1647 but his demise remains a mystery, some believe he simply died of consumption, but folklore insists he was tried as a witch and drowned in the pond of Mistley and his body lies in the ruins in the old church neat Mistley Heath.
His legacy lived on and the myth surrounding witchcraft spread through the counties. The witches of Canewdon, Essex were believed to be able to stop machinery or wagons with one penetrating look and some where suspect of sending plagues of lice against their enemies. To this day the ghosts of the witches are said to still haunt many of the villages in Easy Anglia. In Mistley and Manningtree alone the spectral figure of Matthew Hopkins has been sighted in no less than 12 locations. 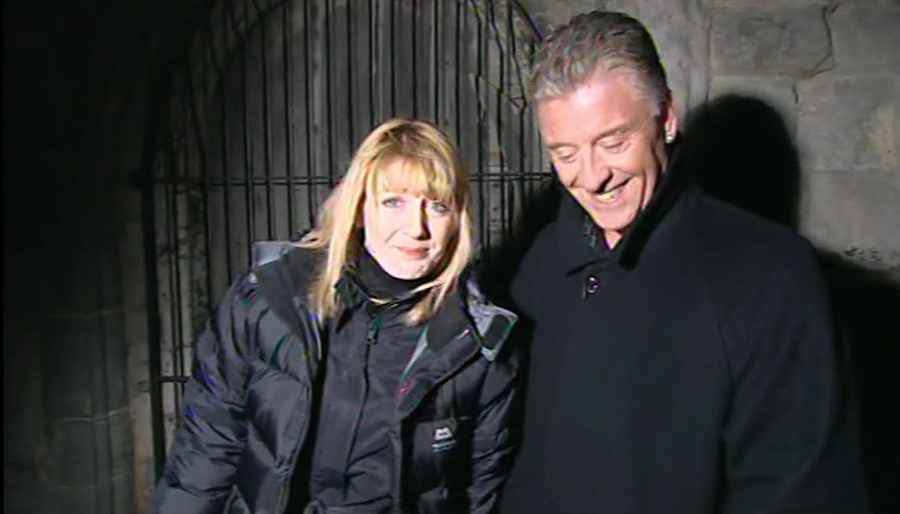 The first location that the team intended to investigate was the graveyard of St. Nicholas Church in Canewdon, but their vigil was initially bothered by a series of technical issues and a light that seemed to fall of its own accord. We joined Yvette in the cold dark church yard with the show's spiritualist medium, Derek Acorah.
Within the first five minutes, Derek picked up on the residual energy of a spirit. He blamed his energy for the issues they'd been having and also for the banging of the church's gate that the team had heard moment before going live.
On night one, the team also investigated two other locations in Canewdon, Scots Hall Crossroads and The Anchor Inn.

On night two, Yvette and the team moved on to Manningtree to investigate three more locations, starting with Seafield Bay, the location is the site where Matthew Hopkins ended the lives of many of his victims. Their ghosts have been seen wandering the water's edge and has been blamed for screams heard drifting across the river and disembodied voices.
Surrounded by quicksand on either, Yvette and Derek were joined by Matthew Smith. Who trudged along the beach in search of the ghosts of Matthew Hopkin's victims. Straight away Derek picked up on the residual energy of several spirits. After long it proved not to be the best place to investigate in the dark, after Yvette hilariously got stuck in the mud and had to be pulled freed in a very undignified manner. Her wellington boots remained stuck in the mud after she was pulled to safety. It has to be one of the funniest moments in Most Haunted's history to date. Even Yvette described it as "one of the funniest things I've ever experienced in my life."
Later on a safer part of the beach, they headed to where Derek felt the energy was strongest. He picked up the spirit of several women who were killed in them, in the water of the bay, using the swimming test.
From Seafield the team moved on to The White Hart pub and then held a vigil at Manningtree Green, the location where the infamous witchfinder general hanged many of his victims. Yvette and Derek were joined at this location by Richard Felix. Some have reported seeing ghostly figures on the green, could these be the spirits of Hopkin's victims? Derek thinks so, he picked up on the spirit of Elizabeth Clarke, Hopkin's first victim. 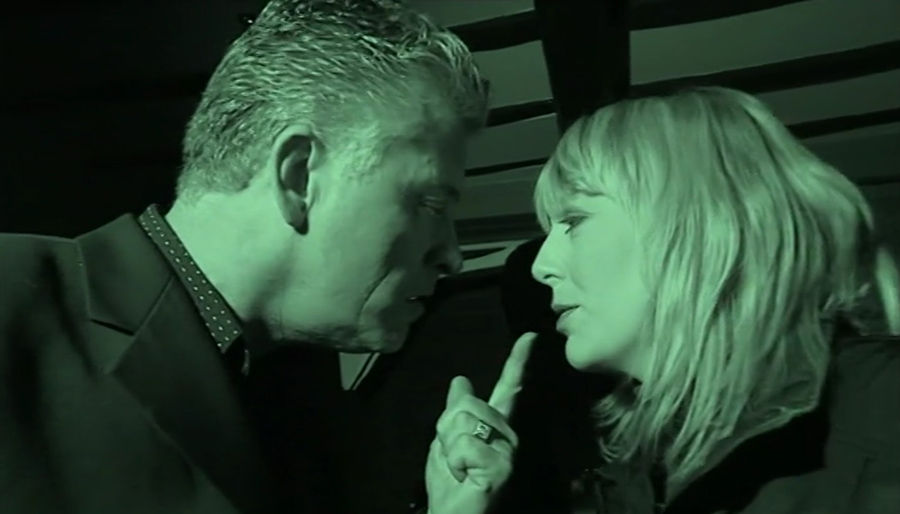 Night three's investigations revolved around the village of Mistley in Essex and included vigils at the ruins of Mistley Towers and the hopping bridge over the ducking pond, but the most dramatic events of the night took place in the The Thorn Hotel. There was so much activity during the vigil that Derek asked to return with Yvette and Richard Felix later in the show. The hotel has been linked to the trials of Hopkins, who took office in the building. The inn is also said to be haunted by a grey lady and a young boy who was allegedly trampled to death by a horse in the yard.
Not long after entering the hotel, Derek encounter the spirit of a gentleman with the name of Francis Mills. Derek then became possessed by these aggressive spirit and revealed that he was an associate of Hopkins. He became quite threatening, calling Yvette a hussey and a wench. Derek then had to be dragged out of the building by Richard and the show's producer Karl Beattie.
After this, Derek was violently possessed again and once again had to be taken away to recover. Meanwhile, Yvette and Richard went to the grave of Matthew Hopkins at St. Mary Church, which is now in ruins at Mistley Heath, but without Derek there was little more the team could do to continue their investigation. So, instead Yvette and the gang headed back to the hub to share their thoughts on the evening with David.