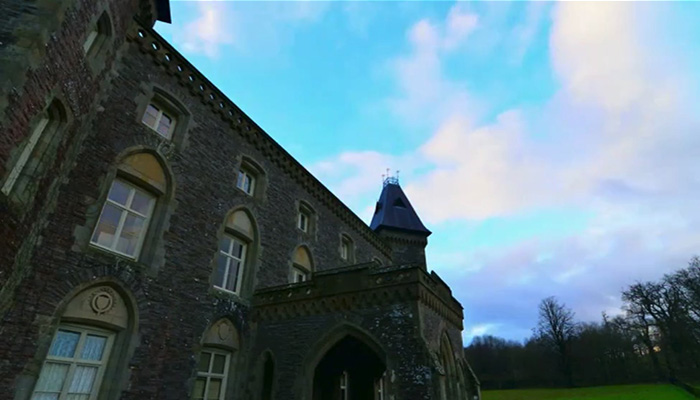 The second half of Yvette Fielding and Welsh metal band Bullet for My Valentine's paranormal investigation of Newton House, a property which dates back to 1660 and is said to be full of paranormal activity of every kind.
In the first half of the investigation Yvette lead Matthew Tuck, Michael 'Moose' Thomas, Michael 'Padge' Paget and Jason James into the house to look into claims that the property is haunted by Lady Elinor Cavendish who was murdered here. Others have witness the ghost of a haggard old lady and the spirit of children playing on the stairs.
Already the band members have seen some odd happenings including doors slamming and objects being thrown. Most of the action in the first episode came when Karl Beattie and Stuart Torevell went off to do lone vigils and both found themselves locked in rooms in the dark.
The episode ended with Karl and Stuart rejoining the rest of the team in the military room where they were about to conduct a ouija board session. 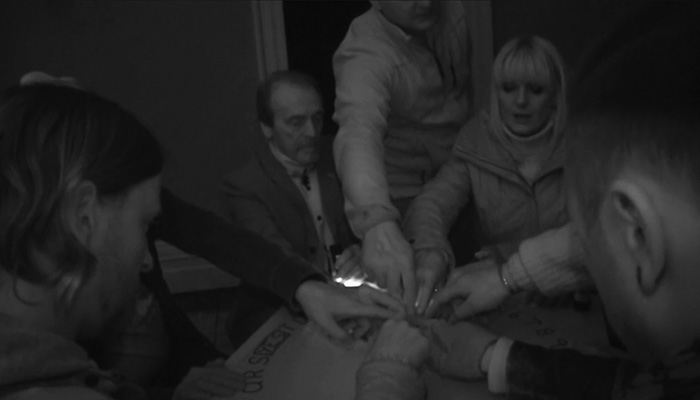 Just as the team were about to start the ouija board an object, hitting Padge from the band in the back. It turns out it was a block of wood, which the gang had already witnessed being thrown around the building earlier in the night. Yvette said that at the time there was no one stood behind Padge who could have thrown.
With their finger on glass resting on the board, the team asked who the spirits wanted to talk to and the glass moved towards Fred Batt, the show's resident demonologist, or as one of the band called him "demon dude." Yvette then called out, "please give a message to Fred" and the glass moved to the word "goodbye," which the team took to mean that the spirits wanted Fred to leave.
As they continued to try and communicate with the spirits, they heard a strange whistling sound coming from behind them, and Karl heard what sounded like someone walking up the stairs outside the room. Then there was panicked when a tin cup landed on the floor with a bang. It seemed the object had been thrown from the direction of the stairs into the room. 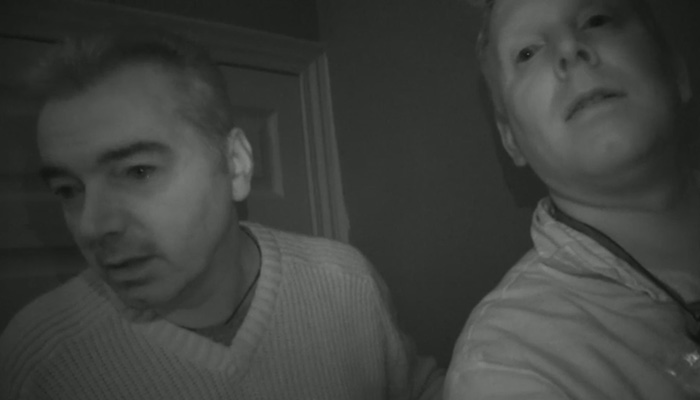 Although there was plenty of activity going on around table, the ouija board died down. So while the rest of the team went for a break, Karl stayed in the military room with camera man, Chris Burton. Almost immediately they started to hear creeks, knocks and bangs coming from all around them, apparently in the same spot that the whistles had been coming from.
Both Karl and Chris then said that they could hear what sounded like noises coming from an old radio in the room, even though the radio wasn't plugged in and had no power. Moments later they heard a door slam somewhere nearby.
Karl and Chris then shifted their attention to a creepy wartime wheelchair that was sat in the middle of the room. Karl called out, "if you're hear in this room, move the wheel chair." They both stood in the darkness willing the wheelchair to move and started to hear odd squeaking noises.
Karl said he thought he saw the chair shake as if someone was sat in it, before admitting he was scared, "I have not felt like this in years, it's like the energy is building, building, building." Despite the build up, the wheelchair didn't move. 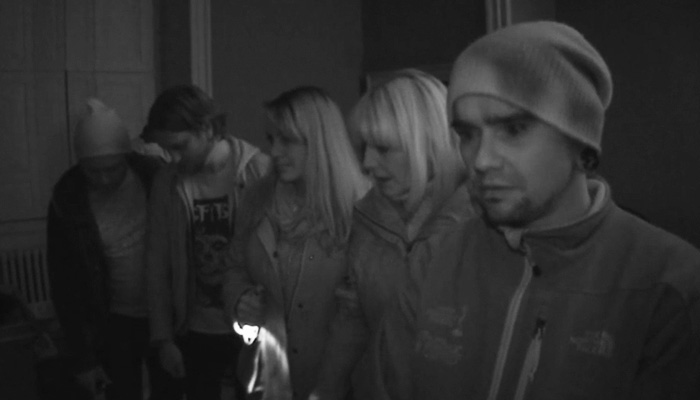 The gang the shuffled around. Yvette, Mel Crump, the band and Chris manning the camera headed up to the upper floor where Yvette started to call out, "we're here. We're ready to play. Come on, give us your worst." Matt from the band had come armed with his own voice recorder like a professional ghost hunter.
They then moved into the military. As they walked in Yvette called out, "can you move the wheelchair?" And a creaking sound like a a wheelchair moving was picked up on camera. They they saw flash come from outside the room and as they were going to investigate, they heard the sound of something being thrown in the room.
Yvette then said, "shall I do the awful chant that's really embarrassing?" She prepared to recite the chant, telling the band they can laugh if they want but assuring them that the chant sometimes works. "I'm sorry, I apologise in advance." She then began her tuneful chant, which is actually nothing more than the end of the Lord's prayer in ancient Hebrew. But, she didn't get to finish it before something was thrown in front of them, causing the whole team and the band to jump.
As they left the room, a small stone was thrown at them. Moose from the band described it as "poltergalatic activity."
They then moved on to another room, where straight away they felt the floor moving. Jason said that for some reason he felt that the room was once a creche and that's why the floor was moving, due to the spirits of the children running around.
Moose ask how Jason knew this, he said "I dunno, I just felt like that's why." Moose then pointed out that it had gone really cold on his legs. 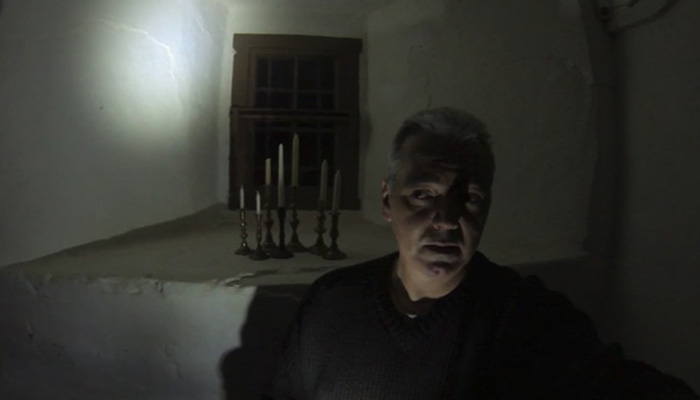 Meanwhile, Karl and Fred were in the basement, which is said to be haunted by three spirits. The ghost of a dog, a gentlemen who is said to be chasing the ghost of a young boy. They wandered around the basement, found the old wine cellars and then were shocked when a pine cone, which had been on display in the window, was suddenly thrown along a corridor.
The pair then entered the vaulted ale cellar and Karl called out, "is there anyone here? If you are here, show yourself to us." They heard a metallic crash which turned out to have been a candle arbour being thrown. 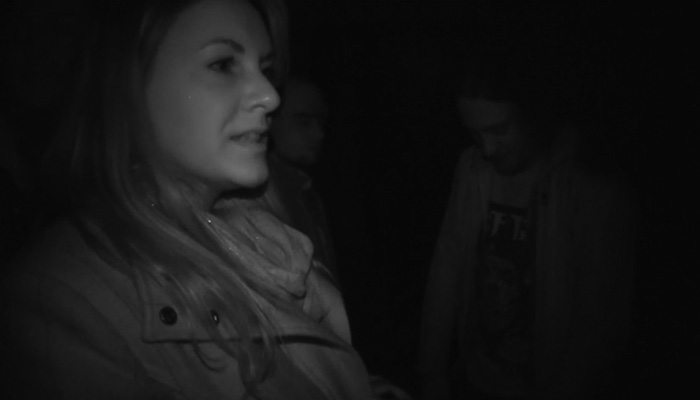 Yvette, Mel, Chris and the band moved on to the landing, an area of the house that is said to be haunted by Lady Elinor Cavendish and her murderer, who is said to have been hanged from the upper balcony here. Visitors to the house have experience a choking sensation as they walk up the stairs.
Back in the area where Stuart collapsed, Mel reported feeling dizzy and a couple of minutes later the band said they could hear a scratching sound.

Locked Off Camera In The Military Room

Towards the end of the episode, Yvette suggested putting a locked off camera in the military room with the wheelchair in shot. 23 minutes into the recording there is a metallic squeaking sound as the wheelchair appears to move of its own accord. The chair once again moves on its own at the 46 minute mark.
Yvette said the team were astounded by what they captured on the static camera and questioned whether this could be the most compelling evidence they'd ever caught.
With that, the two-part investigation came to an end.
For reviews of all of the new episodes, plus highlights and evidence from the shows, and to find out when Most Haunted is on next, visit the Most Haunted episode guide.
»Most Haunted At Newton House - Part One