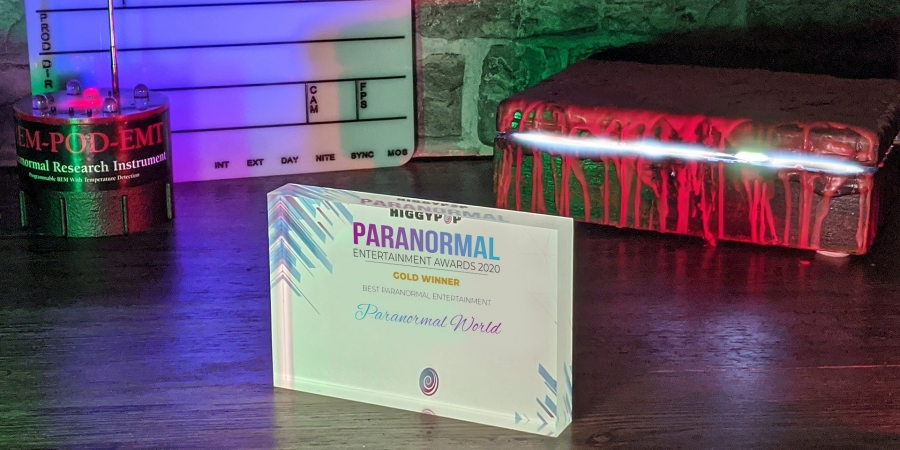 The third annual Higgypop Paranormal Entertainment Awards will recognise the best paranormal content creators, publishers, hosts and broadcasters of 2020.
The winners of this year's awards will be announced on Sunday 29 November based on a public vote which will take place at the beginning of November.
Today we are revealing the 14 categories for this year's awards, but the shortlist won't be revealed until voting opens in November.
Below are this year's Paranormal Entertainment Awards categories...

The best supernatural movies to be released this year, either digital, cinema or home release.

The best factual film to be released this year, either digital, cinema or home release.

The best paranormal book, either fact or fiction, to be released this year.

The best paranormal-themed game to be released on mobile, computer, console or any other device over in the last year.

The best supernatural-theme series to air on television or stream online this year.

The best ghost hunting series to air on television in the UK or worldwide this year.

The best ghost hunting series to stream on YouTube this year.

The best ghost hunting series to stream on Facebook this year.

The best ghost hunting series to stream on Amazon Prime this year.

The best location for organised and public ghost hunts which has hosted events this year.

The person or team in the paranormal community who went above and beyond to raise spirits during the lockdown.

The unrecognised member of the community who's worked the hardest to further the paranormal field this year.

Before we reveal our shortlist and ask the public to vote on their favourites from the paranormal world, we have opened up  some of the categories up for nomination and we want your help to compile the shortlist. We would especially like to know who you think should be nominated in our topical Coronavirus Community Spirit Award category.
The big categories like Best Ghost Hunting Series: Television and Best Paranormal Movie are not open to nominations. This is because the shortlists for these categories are determined by mainstream television and movie releases. Your favourite shows and ghost hunters will already be in these categories and you'll get the chance to vote on them in November.
You can nominate all forms of content created from traditional broadcast, online streaming, social and print, as well as celebrating the stars and creators of that content - as long as it's paranormal.
Only ONE nomination is required for a team or content stream to be considered for the shortlist. Only unique nominations are recorded, we do not log the volume of nomination so that all nomination are treated fairly.
The term "programme" in the category description can refer to either a television show, podcast episode or web series episode. The programme or work must have been released between November 1, 2019 to October 31, 2020.
Nominations will close on October 20 and we will reveal the shortlist and open up the awards for public voting on November 1st. You can nominate right now on our 2020 awards page.
You'll be familiar with most of the categories from last year's awards, but due to the fact it's been such a stranger year, we've made a few changes to reflect the facts that paranormal teams and content creators haven't been out and about as much as normal. We've also re-structured some of the categories to make it easier for smaller content creators to get the recognition they deserve alongside some of the big players in the paranormal world.
If you have any suggestions for who should be in these categories, then now is the time to tell us. You can nominate here before Tuesday October 20.
Can I nominate myself?
Yes. The nomination stage is to allow content creators in the paranormal field to make sure we're aware of their work so we can consider them for inclusion in the shortlist.
How many nominations do I need to receive?
Just one. The nomination stage isn't a public vote. One nomination is enough to get your name on the long list and all nominations will be reviewed and considered equally regardless of the number of nominations.
Can I nominate more than once in a category?
Yes. The nominations stage helps us compile the long list and ultimately the shortlist, it's not a public vote so you can suggest as many content creator as you like.
Why can't I nominate a television show or movie?
The shortlists for these categories are determined by broadcast episodes and movie releases over the last year. We already have a full long list for these categories.
When will I find out if I've been shortlisted?
The shortlist is revealed when public voting opens on November 1, 2020.
Follow @higgypop on Twitter for news and updates and check back soon to vote for your favourite paranormal shows and stars.