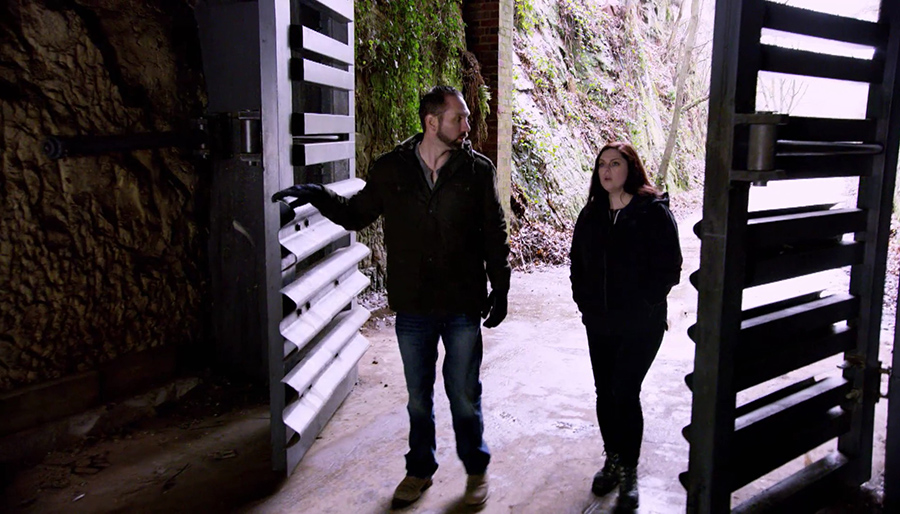 In the second episode of Nick Groff and Katrina Weidman's UK series of 'Paranormal Lockdown' on Quest Red, the pair spend 72 hours locked inside of the a vast and terrifying underground factory, that was built in secrecy during World War II.
The Darkelow Tunnels near Kidderminster in the West Midlands are said to be one of the most haunted places in the world. The three and a half miles of pitch black subterranean corridors have resulted in stores of sightings of dark shadowy figures, apparitions, objects being thrown and strange noises.
The tunnels were excavated in 1941 to build weapons as part of the war effort, as well as tank part and aircraft engines. Later in life it became a secretive nuclear bunker until its closure in 1993.
Three men are said to have died in the tunnels due to a roof collapse during the tunnels' construction. At least one of the men reportedly still haunted this area, his ghost has been nickname "Oswald". The apparitions of a woman and a young boy are seen in the hallways and staff and visitors say a demonic entity roams the tunnels. Could this demonic presence be the half-man-half-dog creature that guests have reported seeing?
Katrina was surprised to learn about this strange haunting, she said, "it's definitely one of the more bizarre stories I've heard in my time in this field, but we have to keep this in mind going forward in our investigation."
Before the lockdown, an apprehensive Nick said, "walking in to the Drakelow Tunnels has this creepy vibe to it. Once those doors close behind us, there's only one way in and one way out and I don't know how we're going to survive the next 72 hours in here." Katrina adde, "Drakelow Tunnels is probably the most challenging place I think I've ever had to investigate."
Fist the duo met the site's caretaker, Sid Robinson, who gave them a rundown of the site's history and ghostly goings on and showed them around the facility. As they turned into tunnel one, just one of four huge main tunnels that run through the depot, both Sid and Nick reported feeling a similar tingling sensation.
Nick pulled his audio recorder out of his pocket and he and Sid called out to the spirits of Drakelow. Sid said "Oswald, do you like me now?" When Nick played the audio back a sound followed the question which they interpreted as "no".
Part of the tunnels are built under an ancient hill fort and burial ground and the site was disturb during the construction of the tunnels. Katrina said, "if all these graves really were disturbed when they built the tunnel system, it does make sense that people would be experiencing very bizarre and negative energy in this area." 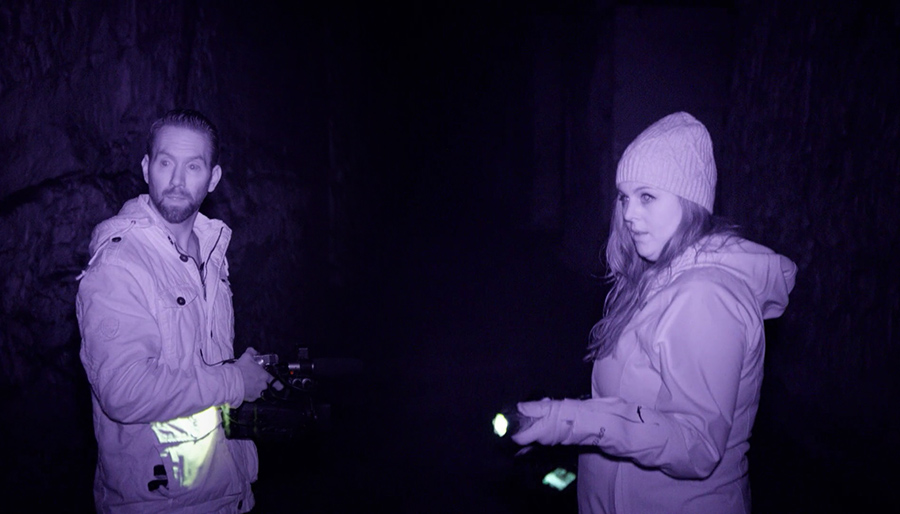 With the doors locked behind them, Nick and Katrina were confined to the tunnels for the duration of their investigation. On night one, the pair started their investigation in tunnel one. They used an analogue radio paired with Afterlife Box app, which scans phonetic sounds that spirits can use as a sound bank to provide intelligent responses.
They started calling out to the spirits as words echoed out of their device. Katrina asked, "do you know what country we're from?" And the voice correctly answered, "America". A few minutes later Nick thought he saw a shadow walk around a corner and ran after it to investigate, but there was nothing to be seen.
11 hours into the investigation, Katrina and Nick were walking around another part of the bunker when Katrin felt and heard something hit her jacket. After investigation, they found that it was one of the BB gun pellets which litter the location's floor.
Camera man, Rob Saffi, then left for the night leaving Nick and Katrina to find a place to make camp and try to get a bit of sleep. Katrina found a spot in tunnel one, while Nick set his camp bed up in an area behind the nuclear bunker area, known as the back tunnels. Nick set up a laser grid around his bed so that he could see if anything breaks the lasers during the night.
As morning approached, Nick was awoken by a loud bang. He grabbed the camera and went to try the source of the sound but couldn't pinpoint where it has come from, so instead went to find Katrina. The pair were then rejoined by Rob and together they headed to the canteen in the former nuclear bunker area. Later they heard a noise and found that the kitchen door has been slammed closed. Katrina stayed in the kitchen, while Nick and Rob went to investigate the back tunnels further.
It wasn't long before Nick ran back to Katrin though after he heard a huge rumbling sound coming from the area where Katrina was. Nick described it as sounding like a small army of people running down one of the corridors. 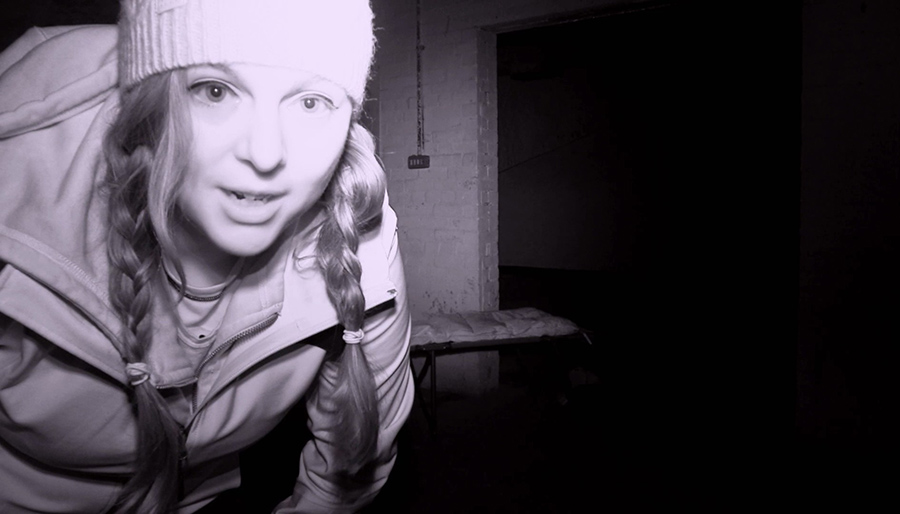 For their second night underground, Katrina set up camp in the old nuclear bunker area, while Nick bedded down in the tunnel one, near the location of the roof collapse that killed three workers. Nick awoke in the night to the sound of footsteps coming towards him and went to check on Katrina, but he got lost in the maze of corridors along the way.
While wandering a lost Nick thought he saw something move, reviewing the footage he capture a dark shape in the distance which looked a little like a dark human figure. Still unable to find Karina, he started desperately shouting for her and eventually they were reunited.
After showing Katrina the footage of the figure he'd captured, the pair went to conduct one last experiment at the location where he's seen the figure. They built a light sensitive gateway in the tunnel. The idea being that if someone approaches the strip of lights on the floor they become brighter. If the lights grew brighter with no one around, then this could be an indication of a spirit presence.
They were also using the Afterlife app in the hope of hearing responses from the spirit. Nick called out to the spirits, asking them to follow behind him. As he did they heard the words "into a trap." Perhaps the spirits were onto them, as the lights didn't seem to indicate anyone passing. Soon after this they heard the sound of a brick being thrown somewhere in the distance.
The ghost communication app also said the words "Sid sick." Once their investigation came to an end, the told the site's owner, Sid, about their findings. It turns out that Sid had been ill on the same say that the spirit voice had uttered the words "Sid sick".
You can read about what happened when I went ghost hunting at Drakelow Tunnels here.
'Paranormal Lockdown UK' continues at 9pm this Thursday on Quest Red. Watch on Sky channel 149, Virgin Media channel 215 and Freeview channel 38, or on demand via QuestOD.
Tags:
paranormaltelevisionparanormal lockdownwest midlandstopicaldrakelow tunnelsnick groffkatrina weidman