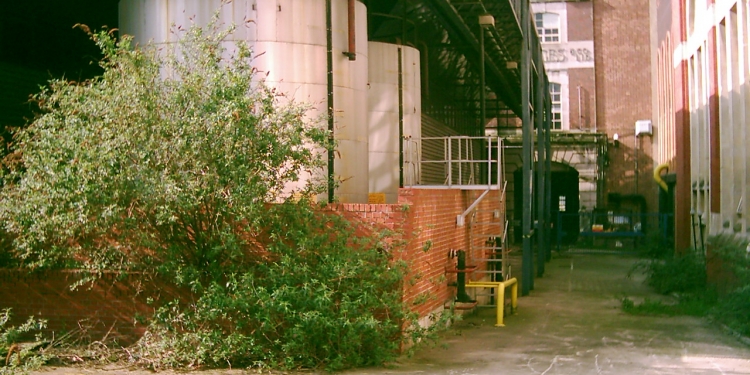 A Brewery in the centre of Bristol, now close and currently being redeveloped. The brewery produced George's and then Courage's beer from 1702.

The majority of this site has been re-developed into residential properties.

Dozens of small breweries flourished at this period, and in 1702, one of them, by Bristol Bridge, was owned by the Mayor, Sir John Hawkins; this business was the ancestor of The Bristol Brewery, which produced George's and now Courage's beer. In 1730 the brewery was bought by wealthy slave merchant Isaac Hobhouse and his sons John and Henry built the Porter Brewery that is the basis of the modern complex.
This business passed in 1788 to Philip George, who with six other Bristol merchants, bought a malthouse in Tucker Street and set up as The Philip George Bristol Brewery. An advertisement in Felix Farley's Journal, 1794, says: 'P. George, Bristol Porter and Beer Company will deliver in barrels and half barrels their Porter to all towns and villages within five miles of the City and is sold at Fourpence per Quart.' Brewing was a cut-throat business so George sent a traveller to Ireland to sell the porter and sold 60,000 barrels a year there. By the beginning of the 19th century George's brewery was acquiring other small brewery businesses and a brewery war began: it was of course won by George's, who in 1878 bought 70 licensed houses as well.
That year they went public and within five years their shares had brought in nearly six and a half million pounds, enough to wipe out many of their small competitors.
By the turn of this century there was only one big local rival left, Bristol United Breweries, which merged with George's in 1952. In 1961, the firm amalgamated with Courage's, who in 1972 were taken over by Imperial. They in turn were taken over by the Hanson Trust, who sold Courage's in 1986 to the Elders IXL group. The brewery was closed in 2000 and demolition and redevelopment started soon after.
Tags:
urbexbristol