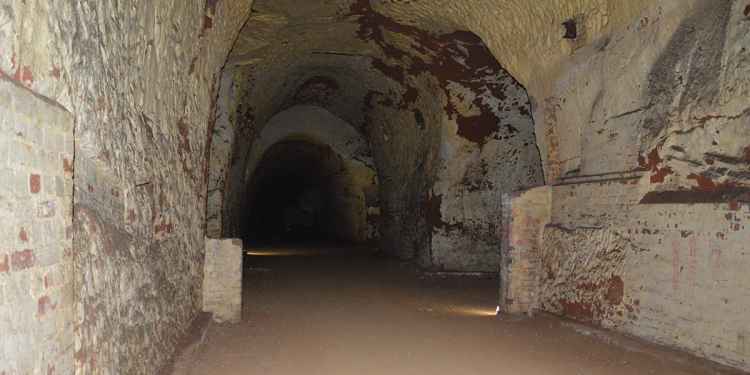 The tunnels have been privately owned since 1993, there are plans to convert them into a museum.

In June 1941, in the hill beneath Kingsford Country Park near the village of Kinver and the town of Kidderminster, construction started on a huge underground depot built in a grid system of interconnecting tunnels with four main lateral tunnels. These main tunnels are connected along their length by smaller tunnels. Together the passageways make up a 3.5 miles of tunnels, covering over 26,000 square meters.
The tunnels were built to house a Rover Car Company factory and between 500 to 700 of their staff, in the secure underground factory they manufactured aircraft parts for the Bristol Aeroplane Company as part of a Ministry of Aircrafts scheme.
At this time all motorcar production had ceased and Rover had been helping with the war effort since 1936 in various factories around the UK, producing engines for the Pegasus, Hercules, Centaur and Mercury.
Although the Drakelow Underground Dispersal Factory was constructed 90 meters underground, it's four main vehicle entrances are at road level at the bottom of the hill and open up into underground passageways which are over 5 meters wide and almost as high.
The factory was supported by several surface buildings including electricity sub stations, a boiler house, coal stores and a dedicated fire station.
An area of the tunnels which occupied around 8,000 square meters wasn't needed by Rover and was put to use as an RAF store. The RAF continued to use the stores even after the factory had closed following the war, it became known as Drakelow Depot.
In 1958, with the threat of the Cold War looming, the area in the north of complex which was formerly occupied by the RAF stores area was taken over by the Home Office and converted into a Regional Seat of Government (RSG9).
The nuclear bunker was designed to protect 325 house local and national government officials, as well as members of the armed forces and medical teams. The facilities included dormitories, toilets, offices and new storage areas. The bunker was also fitted out with GPO telephone communications equipment and a BBC studio, which could be used to broadcast in the event of an emergency.
The bunker was given an overhaul in the early 1980s, it was modernised throughout but reduced in size making its new potential staff compliment just 134. As part of the upgrade the bunker was fitted with new iron blast doors which replaced the original wooden factory doors.
As the threat from the Soviet Union diminished, bunkers like Drakelow were no longer required. The site was decommissioned and sold in 1993 to a private company who had plans to turn the facility into a museum. Unfortunately despite some restoration work the bunker isn't regularly open to the public.
However, the tunnels are used an an airsoft venue and are popular with ghost hunters, paranormal groups regular host nights in the tunnel in search of the spirits of several men who dies during the tunnels' construction.

Watch the highlights from a two and a half hour long walking tour of Drakelow Tunnels, showing the bunker in early-2019.

My Ghost Hunt In The Tunnels

Audio Evidence From The Evening

I recorded audio with a Sony digital audio recorder for the whole four hours and spent today picking out the best bits and the bits which were loud enough to be picked up by the microphone. The audio includes the mysterious whistling sound we heard, the moment something was thrown/fell in the kitchen, and our reaction to the flashing lights we witnessed during the table tipping experiment.