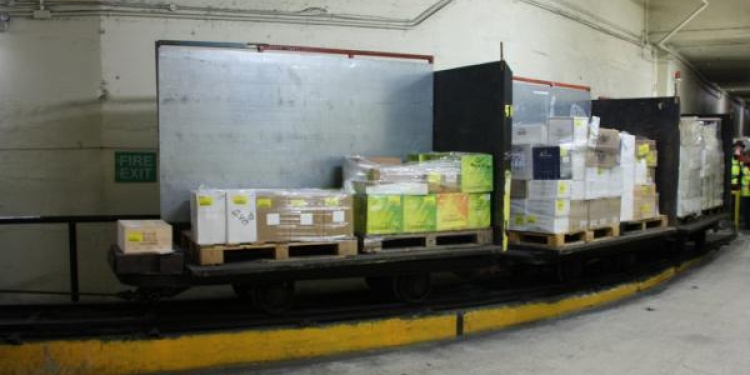 Eastlays Quarry has been used since 1988 for secure, controlled wine storage. Handling over four million cases of wine a year, Octavian has the capacity at the Eastlay cellars to store over 800,000 cases in ideal conditions, 90 feet underground, constant year round temperatures, absence of ultra violet light, no vibration and full humidity control.

This is a private business premises and a bonded warehouse.

Eastlays Quarry was originally quarried for Bath stone by Pictors Monks or as they were later known, the Bath Stone Firms, quarrying started here in 1887. The quarry was requisitioned by the War Department in 1937 to form part of the Central Ammunitions Depot. Most of the stone mines were used by the War Department for stores of some kind, Eastlays was radically changed the same as Monkton Farleigh and Spring Quarry.
During the conversion much of the waste stone was removed and stacked on the surface around the slopeshafts to prevent bombs from penetrating the store. These stones have formed an artificial hill above the site which is now a nature reserve. The War Department also sunk two new shafts to improve access to the quarry. The site was white washed, a level floor was laid and lighting was fitted throughout. The whole quarry was air conditioned to make the atmosphere dry and suitable to store ammunition.
When the ammunitions depot became surplus in 1970 Octavian Wine moved in to the quarry. Very little modification was need to the surface buildings to accept modern day loads, the loading bays were converted to accept HGVs rather than the 1940's Bedford vans of the ammunition depot days.
Octavian still use the original ministry shafts today to access the quarry. Rather than storing crates of ammunitions in the bays below ground, they now store crates of wine on modern shelving the same as you would find in any surface warehouse. On average Octavian store 800,000 case of wine and any one time and handle 4,000,000 cases a year. Some of the WWII features are still in use today, the old ammo storage district offices and now modern day offices used to control the movement of wine around the quarry.

Eastlays Quarry From The Air